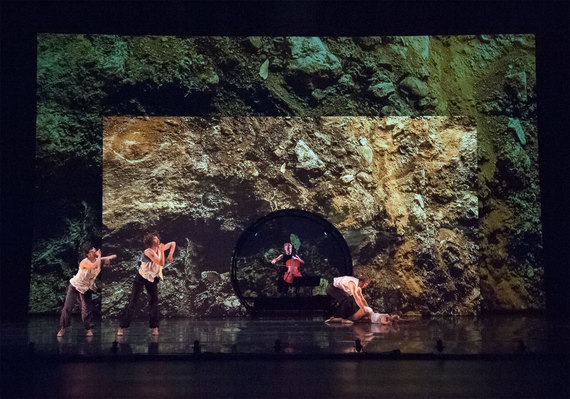 ... I would walk alone,
In storm and tempest, or in starlight nights
Beneath the quiet heavens; and, at that time
Would feel whate'er there is of power in sound
To breathe an elevated mood by form
Or image unprofaned; and I would stand,
Beneath some rock listening to sounds that are
The ghostly language of the ancient earth,
Or make their dim abode in distant winds.
- Wordsworth, Prelude, 1805, 2.321-329

As Nature apparently spoke to Wordsworth, so does she seem to speak to sculptor Andy Goldsworthy, who messes slyly with the environment, architecting installations of profound elemental beauty. These are intricately hewn from stone, trees, icicles, whale bones, sheep dung, leaves, human hair, the blood of roadkill.

Much of his work is ephemeral, expressly designed to be obliterated by wind, rain, snow or heat. Other structures, like his recent Culvert Cairn, a private commission in Marin County, will likely be around as long as Stonehenge.

A time-lapse photographic sequence of the construction of Culvert Cairn -- shot by RJ Muna, and projected onto a downstage scrim -- forms the prologue to Brenda Way and KT Nelson's intriguing boulders and bones, which premiered last night at the Yerba Buena Center for the Arts. Amid clouds of dust, Goldsworthy and his stonemasons, in hardhats, goggles and masks, manipulate rough boulders with bulldozers and cranes, and attack them with masonry saws, chisels, and trowels to construct an imposing circular culvert into which is fitted a stately, carved stone pinecone, that looks to be about as tall as a man.

It recalls the stone ruins of the temples of Angkor Wat, whose pinecone-shaped towers rise out of the tropical jungle with foreboding. Or the pinecone at the tip of the mystical Egyptian Staff of Osiris.

As we gaze at the projected image of this curious monument, ODC dancers emerge behind the scrim: Anne Zivolich, in a gauzy shift, serenely paraded on the shoulders of three men. It appears as if they have sprung from the rocks, a wood nymph and her admirers, conjured up by the magic of Goldsworthy and his crew. (In Greek mythology, nymphs ranked somewhere between mortals and immortals and were responsible for a good deal of mischief in both worlds.)

The scrim lifts and the rest of the dance proceeds against a backdrop on which photographs continue to be projected, with a central space cut out in the shape of the culvert. Into this cutout is fitted a metal platform that serves as a perch for the enchantress Zoë Keating. From her cello and foot-controlled laptop, haunting, repetitive fragments of sound -- layered electronically to sound like an ever-growing orchestra of cellos -- flood the theatre. The score's pounding rhythms and mood shifts, from melancholy to rage and despair, drive the dance, except for one searing extended solo by Zivolich, executed in silence.

Against this backdrop of photographic and musical wizardry, the fearless ODC dancers negotiate terms of intimacy, mostly in male-female pairs, their vocabulary increasing in power and athleticism until they are literally bouncing off the stage and off each other. Their daring is matched by precision: in the way they take the measure of each other, in the placement of their hands and feet on each other's bodies, in their territorial darting around the rocky landscape. They seem to be using Keating's music as a means of echolocation, or biological sonar, a way to navigate this treacherous terrain (the way Batman tracked down the Joker in The Dark Knight.)

"No holds barred" aptly describes their partnering -- much of it upside down, or strangely cantilevered, sometimes whirling at great speed. In the final thrilling sequence, with all the dancers costumed in flowing, diaphanous white skirts, the men hold the women under the arms or by the ankles and sweep them in big circles barely off the floor. Effort is not disguised in their movement, and when their bodies hit the ground, as they frequently do, we hear thuds. Yet even in the most ferocious moments, they exhibit the taut lines, fluid transitions and panther-like jumps of ballet dancers. 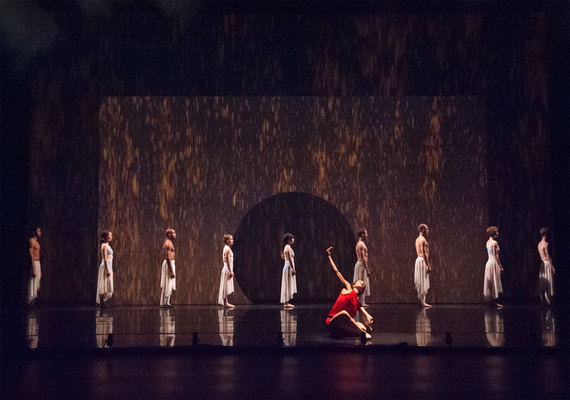 Zivolich sheds her translucent shift halfway through the piece, stripping to a red maillot that emphasizes her fiery "otherness" from the rest of the dancers, whose costumes are restricted to a severe white and black palette. She and Keating evoke two aspects of the Greek nymph Echo, whose beauty and musical gifts, particularly her voice, proved alluring to men, but who evaded them in her resolve to remain a virgin.

According to one legend, Echo drove the god Pan so crazy that he had her killed, her body torn to pieces and scattered over the earth. Gaia, goddess of the Earth, received the pieces of Echo, while Echo's voice could still be heard repeating phrases spoken by others -- just as Keating repeats musical phrases and Zivolich repeats dance phrases. In a moving duet, Yayoi Kambara appears to encircle and try to protect Zivolich, as Gaia might have protected Echo.

In a witty solo turn, Kambara whirls like a tornado behind the ensemble who are standing motionless in a chorus line, each balanced precariously on one leg in a classical ballet position. Kambara snakes her way to the edge of the stage then deliberately mows down the dancer at the start of the line. She pushes her way forward, crowding the dancers into a corner: mortals at the mercy of Mother Earth (or ballet dancers felled by the challenges of modern dance!)

In another legend, Echo falls for the handsome youth Narcissus - which ended badly for both parties. Zivolich and Dennis Adams engage in a feisty pas de deux, full of misunderstanding and frustration.

While the choreography occasionally fails to capture the imagination, as in an overly long passage in which dancers on their hands and knees vainly attempt to mop up some powdery dust sprinkled over the shiny stage (a reference perhaps to the stone dust ubiquitous at Goldsworthy's construction site), the lighting and scenic design by Alexander V. Nichols is consistently electrifying. In one sequence, a heavy gold rain is projected on the backdrop, though our eyes may be playing tricks: is that rain, or are those sparks from an arc welder used in the construction of Culvert Cairn?

Dance, music and scenic design come together in a dazzling multimedia orchestration of Wordsworth's bid to echo the voice of nature. Overall, the production is a colossal triumph of the imagination, continually drawing us back to the mystery of Goldsworthy's dance with nature.