A funny thing happens when you see "Odd Birdz" by the Israeli ensemble Tziporela. You discover you have a range of laughs: You have a rolling laugh that starts out small and picks up, like a snowball; a steady laugh that hurts the sides of your stomach into its eighth consecutive minute; and a staccato "ha!" that punctures your smile, like exclamatory punctuation, whenever something incredibly clever unravels before you.

If you're in the business of laughing and you're in New York City this week, you have to see "Odd Birdz." 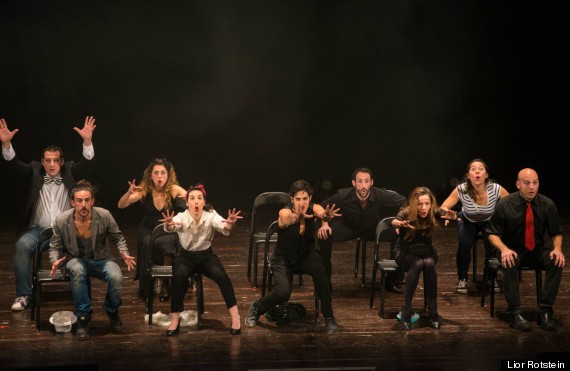 The sketch comedy troupe had a wildly successful run in Israel, racking up well over 500 shows, before hopping on a plane to the Big Apple four weeks ago. Next week, the fiercely talented crew will pack its drawn-on white T-shirts, their sweaters upon sweaters and red berets and hop on a plane right back.

They turn the transitions between skits into skits. They sit next to you in the audience when the theater fills up and wait for you out on the street, serenading with a guitar, when you leave. They are a brilliant bunch that oftentimes make you think while you laugh, and wonder how they came up with ideas that are so on point.

Any qualms about Israeli humor getting lost in translation or not sitting well with an American audience were quashed. This, despite meddling with the usually tabooed topics of death, homosexuality and stereotypes. Their brand of absurd transcends culture, origin and language. Though, it is in English, just to be on the safe side.

1
Aziz Ansari
Seth Olenick
"This face illustrates how I'd react if I saw tie eating monsters and wanted to fool them into thinking I was one of them."
2
Jane Lynch
Seth Olenick
"Caught me! Yes, I'm smoking weed from the world's largest bong."
3
Zach Galifianakis
Seth Olenick
"I do a lot of tagging on the weekends. I come from a long line of taggers. My great great grandaddy was the first tagger to tag The Parthenon. Back then there was no spray paint so he used a mixture of goats milk and ox blood. I use the traditional spray of paint that I get at a store called "Large Cans." It used to be strip joint but they kept the name and just started spray paint instead.

Seth caught me tagging up one afternoon and asked if he could snap my photo. I first asked if he was a cop. He said no. I told him I was. Then spray painted him a glass of orange juice. We both enjoyed it. His pictures bring out the kindness in me."
4
Jon Hamm
Seth Olenick
"Sometimes I just like to feel pretty."
5
Nasim Pedrad
Seth Olenick
"Caught in a rare storm."
6
Bill Hader
Seth Olenick
7
Key and Peele
Seth Olenick
"When we work together, everything comes out alright."
8
John Oliver
Seth Olenick
"While usually reserved creatures, there is no more spectacular sight in the natural world than a British person flying through the air in a defensive body position."
9
Megan Mullally
Seth Olenick
"The real man of the house revealed."
10
David Koechner
Seth Olenick
"Sometimes even small tragedies require a big hero."
11
Kristen Schaal
Seth Olenick
"I'll never shut my pie hole!"
12
Bobby Lee
Seth Olenick
"I don't do this that often so how much do I owe you?"
13
Hannibal Buress
Seth Olenick
"Ducks mean a lot in American society. How did ducks become the premiere bird to rubberize and have in the tub with you as you bathe? Why wasn't I afforded the opportunity to bathe with rubber bald eagles or rubber flamingos. This picture shows how ducks have become very arrogant, I tried to give the duck bread, and it didn't want to take it. It made me sad, but I got over it. Seth captured that moment."
14
Rob Riggle
Seth Olenick
"Knuckle sandwich, Doritos and a Diet Coke. That's your typical Riggle lunch..."
15
Janeane Garofalo
Seth Olenick
"A large forehead is a sign of intelligence. My mother told me that in 1978."
16
Reggie Watts
Seth Olenick
"It took some doing but I finally felt comfortable revealing my true nature."
17
Andy Richter
Seth Olenick
"As Schroeder grew into adulthood, his musical genius flourished, but a mental block prohibited him from being able to play on anything but his old toy piano. Denied the acclaim he felt the music "establishment" owed him, he became quite mad."
18
"Weird Al" Yankovic
Seth Olenick
"I can't help it, I always perspire excessively at photo shoots."
19
Tig Notaro
Seth Olenick
"I heard that an extensive 1998 demographic study estimated that there were about 35-40 million birds kept as “pets” in the U.S — that is an increase of more than 250% from 1990. Crazy."
20
Horatio Sanz
Seth Olenick
"This was inspired by my two favorite presidents -- Lincoln and Grant -- as well as my spirit animal, John Belushi."
21
JB Smoove
Seth Olenick
"Will JB Smoove escape? Tune in tomorrow, same Smoove time, same Smoove channel."
22
Judd Apatow
Seth Olenick
"This is a lovely picture which captures how I feel most of the time."