In a jaded art world, painter Odd Nerdrum still manages to divide people along passionate lines. He has always been seen as a convoluted kitschy throwback by the Scandinavian cognoscenti, themselves desperate to be taken seriously in all things modern and contemporary. Others see him as a superior manifestation of the anti-modern refusal to abandon realism and old master techniques. The joke was on both sides of the argument when, in the early 1980s, his anti-modern embracing of Rembrandt's figuration was used in the service of major works depicting defecation and erections. He showed that the most retrograde anti-modernist could indeed be a leading light of post-modernism. He remains a hero to much of his native Norway, especially among those opposed to the elite institutions. His own reflections on his art have been to label it "Kitsch".

While the notion of what might be "Kitsch" in American art is up for considerable debate, the reflexive deference to anything from Europe in the high-end American art market made Nerdrum a less controversial presence Stateside. He has sold well in the United States, well enough to get himself into deep tax trouble back home in Norway. At age 70 he is heading to jail for two years on tax charges with what appears to be all of his legal appeals exhausted. Norwegian law forbids inmates to conduct business in their cell - possibly a death sentence to the man. 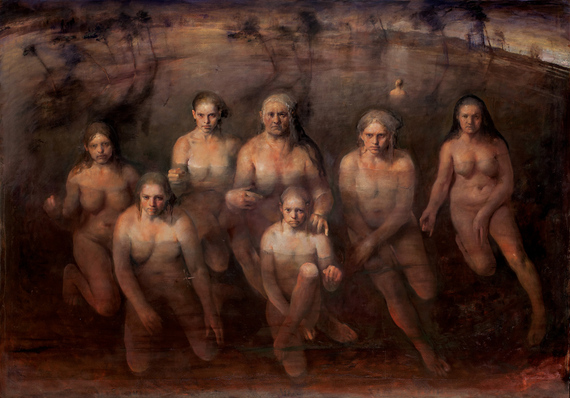 Amidst this personal turmoil, though, the master is not wrapped up in self-pity. Realizing that jail might kill him, he began searching for what might be the final exhibition of his lifetime. He wanted to make sure he was in a show that featured his art among that of his apprentices. Ever the authentic antiquarian, Nerdrum has apprentices in his studio who study along with the master, functioning as studio assistants in exchange for learning the craft of Nerdrum's exacting kitsch. While many top contemporary art galleries would do whatever they could to present a show of new Nerdrum paintings - with price tags starting at a quarter-million dollars and going up - none would allow a show that spotlighted his apprentices as his equals. There just are no easy stories about a once radical groundbreaker settling into comfort and routine when it comes to this artist. 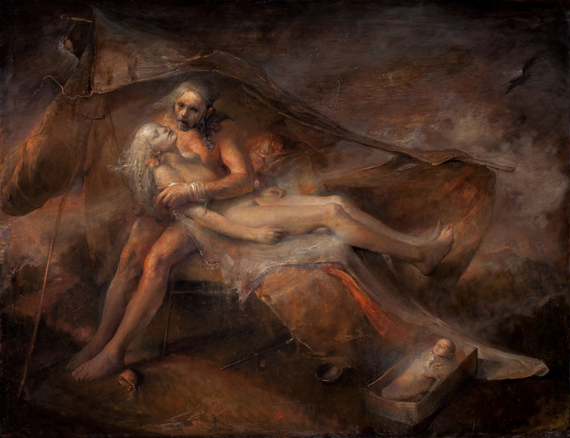 The closest conceptual partner to Norwegian Kitsch in the U.S. is what we call LowBrow art. Nerdrum has shown at top figurative art galleries in the U.S. but all of them have been spaces that associate with the classical nature of his art. With the artist's conceptual insistence on the valor of kitsch, he has cast his lot with a leading LowBrow art gallery in Santa Monica for what might be the final art show of his life. The Copro Gallery is a leading exhibitor of LowBrow art. Its owner, Greg Escalante, is one of the founders of Juxtapoz Magazine - the monthly bible of the genre. While Nerdrum will not be adding Margaret Keane-like big eyes to his paintings any time soon, his joining Copro adds credibility to LowBrow in general. 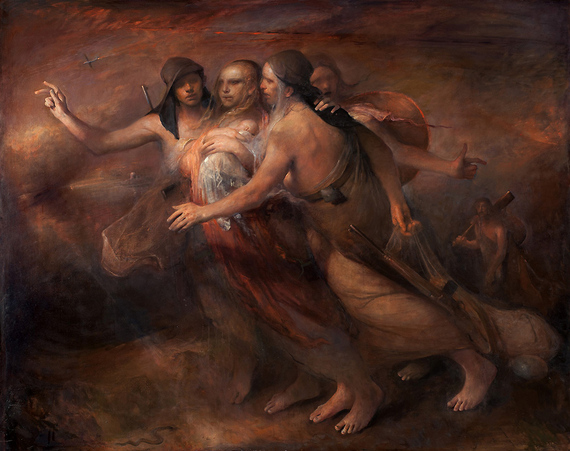 Copro Gallery's exhibition entitled "Pupils of Apelles" will feature an entire gallery of new Nerdrum paintings and a second gallery devoted to three of his apprentices: Luke Hillstad, David Molesky and Caleb Knodell. It opens at their Santa Monica space on November 15 (LINK to Gallery Website). The newest movement in LowBrow is actually the oldest approach to painting; the title of the show refers to Alexander the Great's portraitist, an artist known only as Apelles of Cos (who lived circa 350 - 308 BCE), considered the grandfather of classical figurative painting and a mystical presence in art history as none of his original works remain; everything created by Apelles had been destroyed or vanished before the end of the Middle Ages - his name alone was a synonym of unparalleled achievement in painting during the Renaissance.

And while much of the contemporary art world rejects the draftsmanship and composition of classical painting, leave it to outlaw LowBrow to align itself with something challenging and out of fashion. In our conceptually-driven era, what could be more backward than exquisitely rendered paintings evoking Rembrandt and made in homage to an unseen Greek painter from the third century BCE? The Copro Gallery is also taking select works by Nerdrum to the Scope Art Fair in Miami in December (Dec. 3-7). It might be Odd Nerdrum's last hurrah and people deserve to see the work of this master while he is still alive.