Norwegian press sources reported yesterday that artist Odd Nerdrum, 68, has been sentenced by an Oslo appeals court to an increased term of two years and 10 months in prison. The sentence, which is expected to restrict the artist from painting -- considered by the court to be a commercial activity -- is based on the artist's earlier conviction on charges of gross tax fraud for a sum of around $2.6 million. Nerdrum, who had been sentenced to a two year term in August of 2011, was given the longer sentence after appealing the original ruling.

Reached for comment, Nerdrum's son Bork Spildo Nerdrum told me that his father's lawyer "is in shock because the court has tricked all the numbers up." Bork also stated that "the case is a miscarriage of justice." Asbjørg Lykkjen, the lead prosecutor for Nerdrum's 2011 case, told Norwegian Broadcasting (NRK) that she was satisfied with the appeals court ruling. "As a preventative measure," she asserted, "tax evasion must be strictly punished."

The complex scenario behind the tax charges date back to 1989. In the artist's version of events, approximately forty paintings, each valued in the low six figure range, had begun to disintegrate due to an experimental medium that he had used to paint them. Nerdrum made new versions of these allegedly defective works between 1989 and 2002 and then offered them as replacements to their owners.

Norwegian tax authorities taxed Nerdrum for both the sale of the originals, which he wrote off as a loss, as well as the replacements given to his clients. The court's original decision hinged on a New York bank account, which Nerdrum claims is not his, and an Austrian bank box which had held some $900,000. The artist claims the Austrian cash was a loan from his New York gallery intended as a safety fund for clients who wanted a refund instead of replacement paintings.

During his trial the artist presented a notarized contract between himself and the gallery, mentioning this sum, as well as its purpose, which the court judged irrelevant. Prosecutors asserted that Nerdrum went to great lengths to hide money he had earned, as well as traces of it.

According to Richard T. Scott, a former student on Nerdrum's who has been following the proceedings, Nerdrum has already made full financial restitution.

"It was acknowledged by the court that the artist had paid the taxes in full. Nerdrum claims that he, in fact, paid twice -- and the Norwegian tax authorities actually owe him money. Having seen how the Norwegian press and government has been aggressively biased against him for many years, I think the court presumed him guilty from the beginning, and asked it of him to prove his innocence. I know the Norwegian judicial system follows the Napoleonic code, but innocent until proven guilty seems to me to be a basic premise of justice."

Nerdrum, an artist whose representational works have gained attention for their idiosyncratic and often frankly sexual imagery, has claimed that the government is intent on persecuting him, and that the prison sentence is intended to drive him to suicide.

During a September, 2011 appearance on the Swedish talk show Skavlan, Nerdrum, who has refused to give interviews to Norwegian media due to their perceived bias against him, claimed to have been targeted by government officials. He asserts that an undercover agent from ØKOKRIM (The Norwegian National Authority for Investigation and Prosecution of Economic and Environmental Crime) told a group of artists at a 1996 party: "It is Nerdrum we shall take someday." A few moments later, after making critical remarks about Norway's labor party Nerdrum states "Thus, they began to operate with all possible variants to get me."

The interview can be watched below:

Given the complex and confusing nature of this case, and the dramatic statements made by the artist himself, it seems nearly impossible for anyone outside the courtroom to determine whether or not Odd Nerdrum is guilty of tax evasion. However, what is clear -- in my opinion -- is that Norway's courts have given the artist an inordinately harsh sentence which has enhanced the already Kafkaesque flavor of the affair.

Taking away the brush and palette of its most widely known painter puts Norway in a different light to the world, and begs comparison to China's treatment of the dissident artist Ai Weiwei. Ironically, the actions of Norwegian courts will very likely enhance Odd Nerdrum's fame, and lead to increased recognition and higher prices for his works. If Norway's prosecutors truly believe he evaded taxes, why wouldn't full restitution and a house arrest put the matter to rest? The harshness of Nerdrum's sentence gives credibility to his claims of persecution, which might otherwise seem paranoid.

The best commentary I can think of for what has happened in Nerdrum's case comes from the notebooks of the philosopher and historian Bertrand Russell, who understood the battle between the artist's need for freedom and the state's need to control:

"Art springs from a wild and anarchic side of human nature; between the artist and the bureaucrat there must always be a profound mutual antagonism, an age-long battle in which the artist, always outwardly worsted, wins in the end through the gratitude of mankind for the joy that he puts into their lives. If the wild side of human nature is to be permanently subjected to the orderly rules of the benevolent, uncomprehending bureaucrat, the joy of life will perish out of the earth, and the very impulse to live will gradually wither and die."

See a slideshow of the artist's work below: 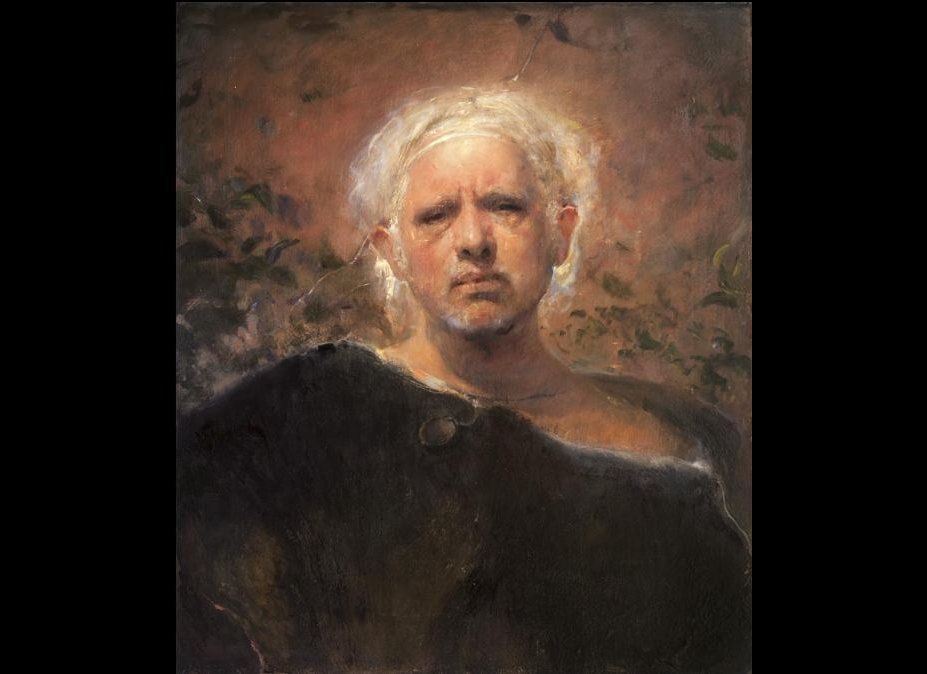 1 / 5
Black Fur (Self Portrait)
29.5 x 25.5 inches, oil on canvas Paintings by Odd Nerdrum presented with the permission of <a href="http://www.nerdrummuseum.com" target="_hplink">The Nerdrum Museum. </a>