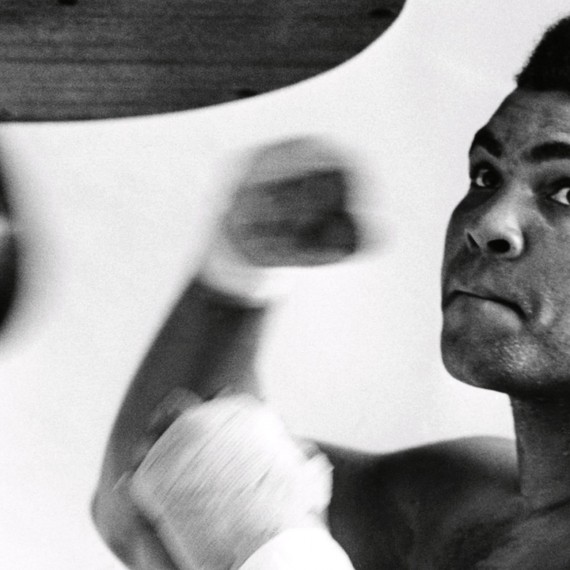 "Float like a butterfly, sting like a bee"...Is there anyone in the world who doesn't know this was said by Muhammad Ali?

In a world without 24/7 celebrity self-postings.

In a time before 24/7 news streaming.

In an age when data was not yet driving sports reporting...heart and soul were still the key.

In an era when word-of-mouth sharing meant just that and nothing more...

A young boxer named Cassius Clay sprang, or rather, catapulted into our global consciousness in a way that should make every reality faux-celeb wannabe famous for anything feel jealous and hang their heads in shame, and lament over the ephemeral nature of their celebrity, because even as they fade into well-earned obscurity, the legend of Ali grows and grows.

My good friend Michael R, who was born and bred in Cologne, Germany, surmised that I would be writing about Ali and shared the following: "He was an idol to me and many other kids and grown-ups alike. Perhaps most astonishingly, he gave us a sentiment that he was one of us."

Read the obituaries and postings from all over the world - "He was one of us" is a fair summation of much of the sentiment.

"He was a global superstar before there were Facebook pages, Twitter accounts or reality shows. He was the show! I wonder how his career and image would have been shaped by today's 24-hour news cycle, social media and marketing. Would Ali be up at three o'clock in the morning to tweet at his opponents, post selfies of himself and his mistresses, and sell a men's fragrance called "Sweat"? Would he be the hero we like to believe in for his athleticism and convictions or would he be just another celebrity fighting for attention against Kim Kardashian?"

I wish I had met him. I wish I had known him. But I did have two brief encounters with him that helped cement my love for what he stood for.

The first came about when my daughter, then around 12 now 30, came with me to the NBA All-Star Game. As we left one of the many parties of the evening we saw Ali - walking very slowly and very deliberately (Parkinson's), surrounded by security. Elianna had the souvenir program of the night and wanted his autograph, and she literally just stepped right in front of him. One of the security guards blocked her and began to shoo her away - Ali stopped him and said let the little girl through - and he smiled, took her program and started to write his name. His hand was shaking so badly that he stopped writing and had to start again. To this day she has that signed book with a half and full Ali autograph on the cover.

The second was at the London Olympics. Mitt Romney, then running for President of the United States, was at an event hosted by the US Olympic Team. Needless to say he was surrounded by people who wanted a glimpse, a handshake, a picture. Just then there was a commotion off to the side as all of the young athletes began to crowd around a man being pushed in a wheelchair...it was Ali. They surrounded him and escorted him to the front of the room - needless to say everyone followed. Mitt was left audience-less at the back of the room. Ali was whom we all wanted to be near.

So much has been written about him and so much more will be written. There are some who worship him and some who are cynical about his motivations. Those who saw unconditional love in him and others who saw very particular love.

And yet here is the thing...he himself understood better than anyone that what motivates us changes with time; that experience evolves our thinking; that the world impacts our beliefs...listen:

The man who views the world at 50 the same as he did at 20 has wasted 30 years of his life. Muhammad Ali

I leave it to you to read all you can about him. I strongly recommend studying some of his quotes - I hope you will be as inspired as I am.

We talk about authenticity today like it is somehow a by-product of our digital world instead of being what it really is - the basis of credibility upon which anything truly lasting has to be built.

Ask yourself Michael R's question and see where you net out.

As for myself - I crave authentic heroes and he is one of mine.

Ali's got a left, Ali's got a right - when he knocks you down, you'll sleep for the night; and when you lie on the floor and the ref counts to ten, hope and pray that you never meet me again. Ali