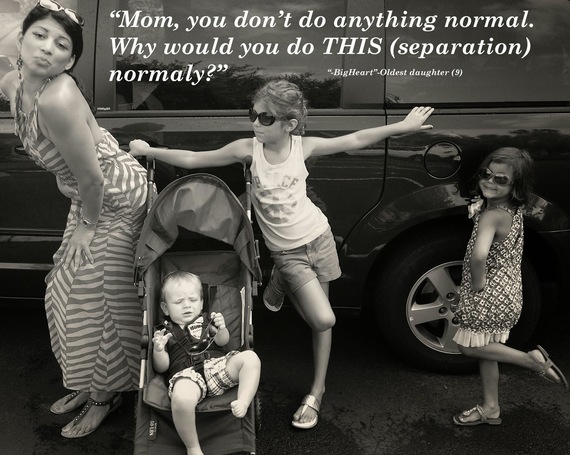 When I told them about our separation, they were present, they trusted me wholly and it's been open communication and calm ever since. I'm not tooting my horn; I'm citing empirical data that proves the positive. No matter how you try to spin my personal life issues. I have screwed up, mis-stepped, gone the wrong way and sullied my reputation, yes.

Still, without the slightest falter or quiver in my voice, hear me say: I am a mother. If you are one too, say it out loudly. My biggest prides are their own people, but each and every one came from my flesh and blood. My first daughter taught me that all hardships bloom into beauty. She was near-evil as an infant. I swore she'd be an only child, and then she grew up, bigger than I could have dreamt.

I'll call my first born "Big Heart." When she was 2, my husband and I watched her play with several children at the health club. She saw a boy get left out of some game. He retreated to cry sitting against a wall. We watched her notice him as she played in the exact game he was banished from. She walked with deliberation and sat next to him. Arm on his shoulder, head tilted saying something. At two she wasn't using too many words, but they worked. Together they stood. I, watching from the elevated-track, cried.

This girl is a nurturer, and an advocate for the lonely, left out, or simply needy. For her birthday, I asked her if she thought she needed so many toys? She offered to have people bring used toys she could donate.

At 7 she saw people (some with kids) lining up at the church across from our house. We talked about how lucky she is, and she wanted to volunteer. So, she wasn't born with the "killer instinct" her parents are filled with when it comes to competition. No, she is far better than I could have hoped for. She is my beautiful surprise. Her instinct is LOVE. 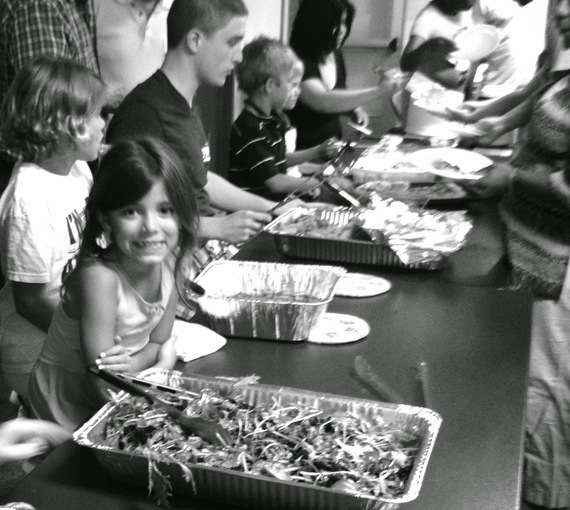 My "spit-fire" mini-me middle is athletic, nimble (in sport and mind) but I'm constantly reminding her about "being nice and kind." Let's just say she is comfortable in the psychological term, "ID." She is self-absorbed, leans towards fast jealousy and has a bit of a mean bone.

She has that kind of twinkle in her eye that can light up a room, or flatten a person. I try to nurture her boldness, her strange (almost psychic) perceptions, and this confidence she possesses. Its a balance between teaching compassion and letting her get a bit burned when her attitude comes back to bite her. She, by far, is the one most like me. That scares me. It also envelopes me in smitten love for her. My father would openly say: "I only hope you have at least one child...just. like. you." Wish granted, Dad. 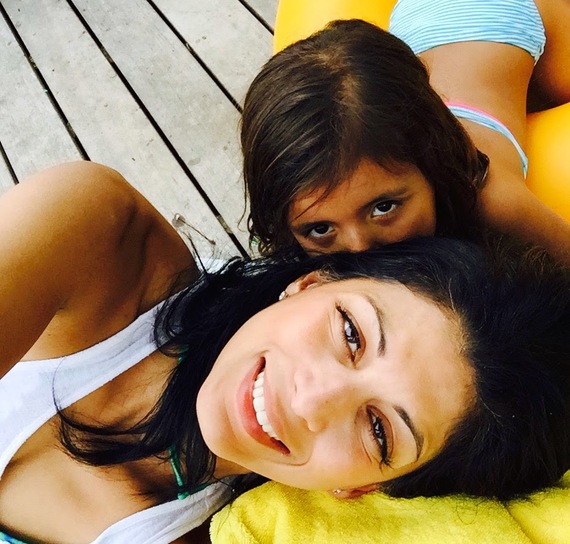 Just this morning, I tried to explain "karma." I told her that when you do/say hurtful things to anyone, (even if no one else sees it) the "magic of the universe" will make sure to return it right back to you... and usually it comes back, waaaay bigger and worse."

Her response with tilted head and a hint of questioning in her eyes: "Not all the time." She said it like a statement. She does this often, fibbing is an innate skill for her. I said: "Ohhh, sugar, every time, and way worse. Trust me. "She took it in.

My best friend, (her father), often jokes she'll be in "Hollywood, Sales, or Incarcerated." 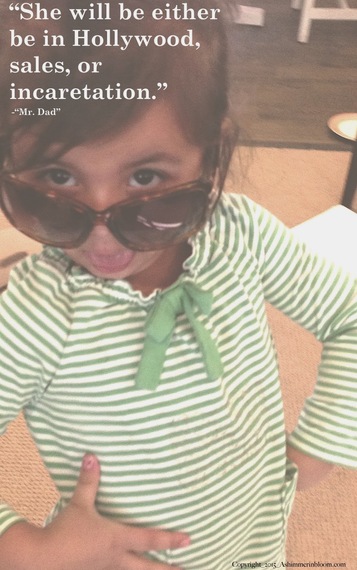 I meditate every day that she is none of those, but transforms the very things that could harm her, (or someone else) into a keen understanding that does only good. (Fingers crossed.)

My baby "Bub," holds a special place in my heart. When he arrived, life threw some curve balls at me. Betrayals to me, fear and an illness he suffered early on bonded us deeply in that first year. 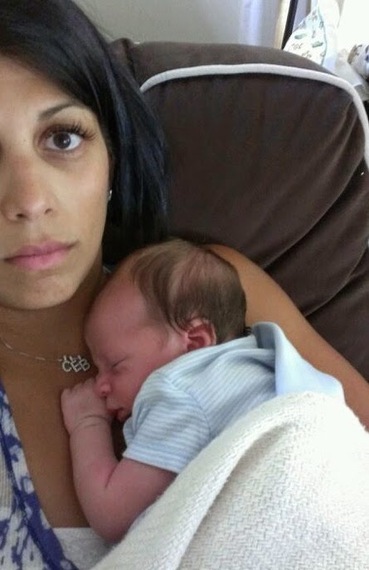 I remember I would whisper to him many times during the day, and during 2:00 a.m. feedings: "Its you and me kid, we've got this." It was a bit of pep-talk mantra for me, but he heard it. The "prized" son we always wanted had arrived, looks nothing like me and is a total Mama's boy. (For now.)

He is my biggest physical challenge by far. He tests me, clings on to me like a human front-pack at times. If there is a way to destroy, test it's gravity or break an object, he'll find it. He is only two, yet I have never seen something so small consume so much food. He is my sweet boy, and I say this lovingly, a complete A-hole. 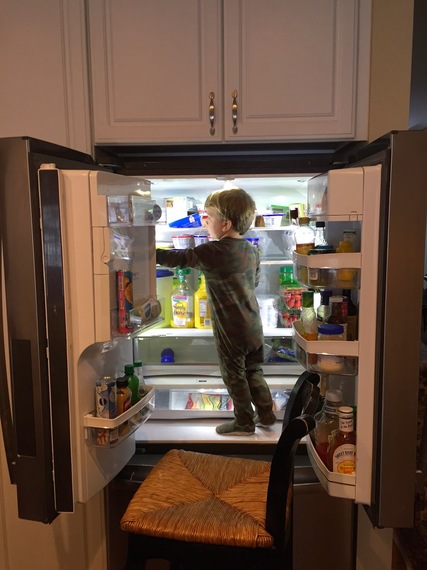 Motherhood, come hell or high water, I live it. I earn it. I know when to outsource it in doses. On a day like this, I stop in absolute awe at the kaleidoscope of moments I have been so lucky to co-create. Their compassion, and thoughtful gestures, the witty come-backs, the simple and the complicated physical feats they conquer. Even the sound of my son and his screaming: "I DID IT!" reverberates like-minded pride within me. I am imperfect, indeed, ask the long line of towns people around me. 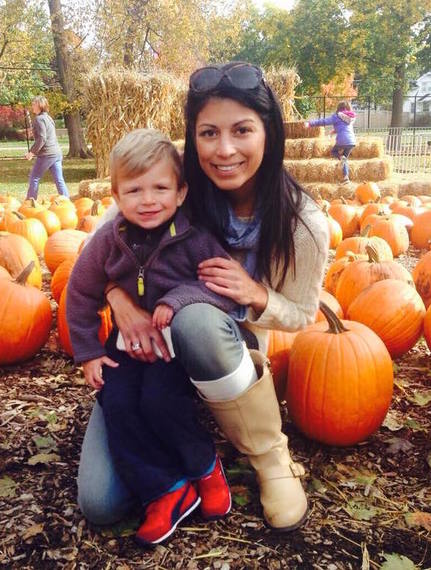 Take everything else, take it all, but you will not take away the most magnificent work-in-progress that is my living masterpiece. If you are a mother too, (or a father) take a minute or five, think of all you've sacrificed, and lost. Then go to the "high-light reel" of these little people you created, adopted, raised and see that no matter what happens, or how you may have failed at times...

You are still here, and you have so much. Be PROUD. Be GRATEFUL.

More:
sacrificedivorceChildrenParentsraising children
Newsletter Sign Up
Raise the kind of person you'd like to know
Subscribe to our parenting newsletter.
Successfully Subscribed!
Realness delivered to your inbox