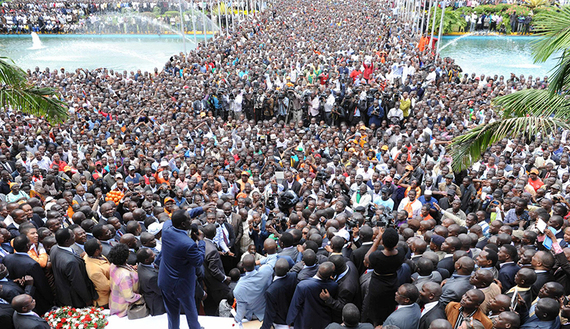 I have not agreed with Raila Odinga on all his policy positions: I did not agree with his support for Operation Linda Nchi, which in retrospect has proven to be the epitome of a phantasm of Kenyan power play in East Africa. I did not agree with his signing of the peace accord in 2008, and the subsequent coalition government because I was alive in 2002 and saw the disintegration of the NARC government. I do not agree with the continued shambolic manner in which the Orange Democratic Movement conducts its bureaucratic affairs; it is not only a recipe for loss in the general election, it also makes it practically impossible to consolidate the backing of the rest of the country in uniting to combat ethnic tyrants of Jubilee. But I also know that despite the failings of dogma around Raila, despite the failure of strategy and the image management disaster that plagues his crusade after 2007, the son of Jaramogi remains an enigma in Kenyan politics.

I know too that policy is immaterial without a political vehicle, and that even at the success of the one, the other can render any successive progress superfluous. This was the lesson of 2002, and of 2007; this is the lesson Raila must tap into in 2017. Let me explain.

A cursory look into Kenyan politics from 1992 would make it seem like the Kenyan opposition in general, and Raila Odinga in particular, are held to higher standards of peace-building and democracy than the prevailing government. In 2007, when the whole world joined in condemnation of Mwai Kibaki and an obviously rigged election, the discourse centered on the opposition giving up their democratic contestation for the peace of Kenya. This was regardless of the fact that ODM and affiliate parties were not engaged in a unilateral contest, and that it was in fact the PNU government that had unleashed state machinery against innocent Kenyans. This attitude of the onus for peace was also seen in 2013. Following the 2007 violence, the media engaged in massive self-censorship, international organizations kept silent on obvious irregularities and Kenyans added their silence to the trial of a democratic process. It was again left to Raila and the CORD coalition to seek out redress of the judiciary in order to maintain the peace; it was the opposition that had to pacify its electoral strongholds and avoid violence; it was the CORD coalition that had to be the guardian of Kenyan amity, and eat the humble pie while madcaps like Aden Duale insulted their mothers at every turn.

In 2017, Raila, and any supporter of his who knows this history must not allow themselves to be styled a custodian of national unity, nor a sentinel of Kenyan peace. Raila Odinga is also a political entity with interests and ambitions, and must begin acting like it. If the empty-headedness of Aden Duale is to stop, if the Moses Kurias of this world are to hold their tongues for a political legend, power must be projected. So, Lesson 1 of 2017: CORD, must not rationalize spinelessness into patriotism.

Secondly, whatever political strategy the CORD spin room has in mind, it must not be small enough to be dependent on the mercy of a Kenyan media fraternity that would rather have a false peace than liberty. I assume Raila Odinga knows the potency of the international lobbying that the Jubilee government has engaged in during the first term. It is known too that Muigai Kenyatta has expended great resources pandering to the western world in attempt to match Raila's perceived stature as an international figure. For these twin reasons, we know the international community has the influence to talk the Kenyan media into the same peaceful nonsense that lulled Kenyans into a deceptive peace in 2013.

If the information and freedom of agency that enlightens a democratic contest is not freely availed in an elective context, then the media fraternity has become irrelevant to the seeking of democracy in a country. This is Kenya today. In any event, the Jubilee government is obviously keen on cutting on the rights of any source of information it cannot control, or simply jailing those it does not understand. Raila's team must capitalize both on the unpreparedness and the media bias that permeates Kenya at the moment. You don't need a magic wand to know that Jubilee's online machinery is so effective that media houses resort to State House for the content of the news they share. Newspapers merely go to Muigai's Facebook page for images for its papers and online sites. Lesson 2 of 2017: The media is well intentioned, and the opposition has supported their fight for civil rights multiple times, bailed them out from jail and stood by them in courts of law; but thinking them an ally is imprudent. The media has no ally or enemy, just business to make. 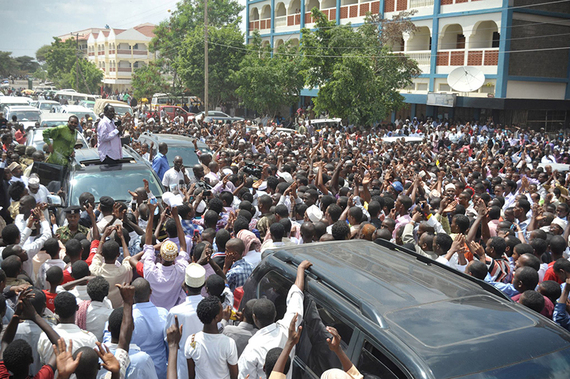 Third, Raila must treat hysteric sideshows for what they are. William Ruto, Aden Duale and their ilk are dullards who reason only on hateful rhetoric, if at all, and any political cognizance given to them is wasted time. The Jubilee government has shamelessly employed the benefits of tenderpreneurs, ghost workers and scandal after another to ready their war chest for the 2017 election. On his part, Raila must make it clear to his lieutenants on the ground: his governors, senators, women representatives, members of parliament, and ward representatives, that if indeed the right to rule descends from the people, then the people must contribute to the kind of democracy they want to see. Once he has ignored the "peaceful opposition" tag I mentioned above, Raila's team must scour every coin it can to match the billions pillaged by the regime; law and lawlessness are immaterial in a country where Supreme Court justices are investigated for corruption.

If, in the last two elections Raila has "lost in peace," he has also earned both the right and the experience to employ whatever means there be to secure State House, especially those employed by his opponents in the last 10 years (Of course nobody should worry if all wins from 2007 have been legitimate). Raila must send Orengo, Junet and the brigade after the irrelevant simpletons pointed at him by the Jubilee mechanists. Hence, Lesson 3 of 2017: Duale, Kindiki, Ruto and anyone who is of no realistic threat to Raila must be treated as such. Raila must not play with children if he does not want a muddy smear.

Finally, Muigai Kenyatta is an extraneous newcomer to the political scene who was rendered such in 2002. Nothing stops Raila from repeating the same feat. In 2002, it was a collective 24-year history and incumbency, and Daniel Moi left. The lesson from 2002 is that while the son of Jaramogi cares about the peace of Kenya enough to unite with other political entities, he cannot keep doing so unilaterally. The lesson from 2007 was that whatever the results of Realpolitik, Kenya will stay long after the demagogues who fight over it are dead. Ask Kivuitu. Raila needs a show of power: it is not selfish, instead it is the bargaining strength that his opponents have taken for granted. It is time Kenya's only political hegemon acted as such; the rest will fall into place by the immensity of the moment. Raila must bare his knuckles and punch his weight: if Jubilee bows at the altar of the superlative, CORD must match and surpass. If Jubilee cries in churches, Raila must worship a higher God. If Jubilee is corrupt, Raila must esteem a superior thievery. This is the Realpolitik that we have long substituted for egalitarianism, calm, and tolerance. It's about time.