Lawrence O'Donnell had some tough words for RNC chairman Michael Steele this morning regarding the GOP's loss of the 23rd congressional district in New York for the first time in history. O'Donnell accused Steele, along with Sarah Palin and others, of leading the Republican party to defeat in the 23rd by ousting the Republican candidate Scozzafava from the race in favor of a more orthodox conservative who proved too orthodox for the voters. An incredulous O'Donnell asked Steele how such a stunning defeat could happen.

Steele responded with some humor: "Lawrence, I'll start by apologizing for letting you ask me a question in the first place... I don't apologize for anything. Last night was a great night for the Republican Party." The RNC chair argued that there wasn't much significance in the GOP losing that seat because it will have to be defended again in 2010, and he is confident the GOP can pick it back up.

It was here that O'Donnell got aggressive:

O'Donnell: Michael, you made the 23rd the most important congressional district in the country. The Democrats didn't do it. You did it. You lost it. You led your party to a disastrous loss that it has never experienced in that district before. Congratulations, nice work.

Steele: Hey Lawrence, if it makes you feel good, baby, then have at it. Just lay it on me. I'll shut up and listen to you. Because clearly you've got your talking points from the DNC. You roll them out and have fun with them. You're not going to spoil my juice right now; you're not gonna take this high away from me.

We would be remiss in not mentioning Steele's brilliant introduction in which he expressed his joy with yesterday's results by simulating the Heisman move and saying "assume the Heisman position." Co-host Mika Brzezinski was mortified enough to bury her hands in her face. A screenshot of Steele's move and Mika's embarrassment is below. 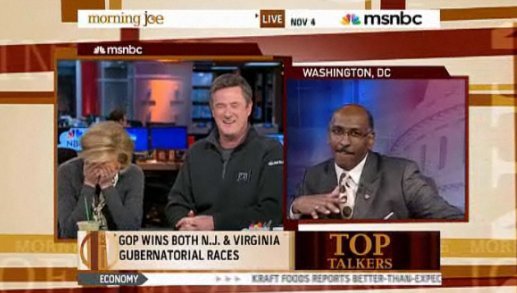