American students’ knowledge about managing money is downright unimpressive, according to a study released Wednesday.

The Organization for Economic Cooperation and Development (OECD) study chronicles how students around the world scored on a Program for International Student Assessment (PISA) financial literacy exam in 2012. Of the students from 18 countries and economies who took the exam, American students scored solidly in the middle. On the other hand, students from Shanghai, Estonia and the Flemish Community of Belgium led the pack, while Italy and Colombia’s scores trailed at the bottom.

The results are unsurprising, given how American students have performed on other PISA exams. In a 2012 PISA test on problem solving, American students scored barely above average. They were similarly mid-pack on PISA’s reading, math and science assessments. Students from Shanghai scored higher than Americans in all cases.

According to the OECD report, the exam –- which was taken by approximately 29,000 15-year-olds -- was designed to measure if teens had the financial skills to manage money effectively and make sound financial decisions. Approximately one in 10 American students –- or 9.4 percent -- earned a top score on the exam, while 17.8 percent did not reach a basic level of financial literacy.

However, the report did not necessarily point to the type of financial education taught in schools as a reason for students' scores.

“Financial education is relatively new if it’s present at all in schools, whether it’s cross curricula or as a specific subject,” said Michael Davidson, the OECD’s head of early childhood education and schools, on a conference call with reporters Tuesday afternoon. “When we look at the relationship between the availability of financial education and the performance of those countries in financial literacy, then you see a very scattered picture. … It’s too early to say whether different models of financial education are effective or not and clearly there are external influences that are important as well.“

The report also cited several external factors that could contribute to higher scores.

Students around the world who have bank accounts tended to perform better on the exam, even compared to students of similar socioeconomic backgrounds. In the United States, 17 percent of the variation in scores is associated with a student’s socioeconomic background -- similar to the OECD average. In America, there was also strong correlation between students’ scores on this exam and previous PISA math and reading exams.

In every country, students who reported higher levels of perseverance tended to perform better.

Interestingly, female and male students had similar scores in most countries. This differs from previous assessments taken of men and women later in life which show that men generally have higher rates of financial literacy.

The graphs below display the new data on gender similarities: 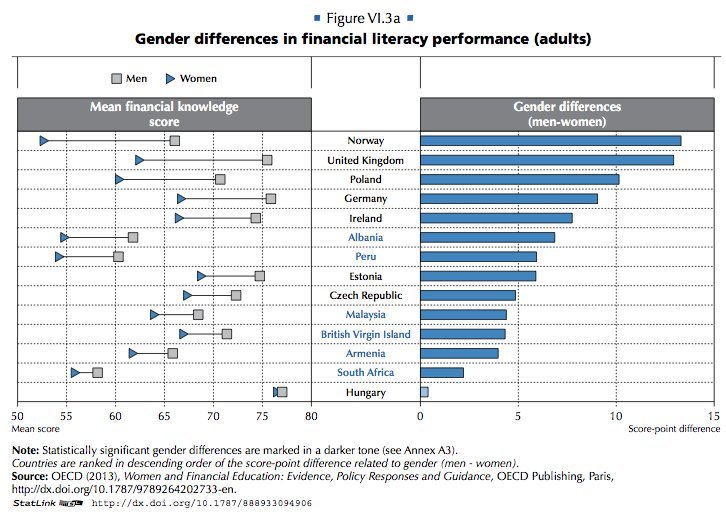 The report builds on previous ideas that American schools are not providing students with the same skills as its international competitors. However, education experts in the past have warned about jumping to conclusions based on PISA results.

“These kinds of studies are really good at describing where we stand and maybe looking at trends,” Jack Buckley, the commissioner of the National Center for Education Statistics, told Education Week of previous PISA results. “They’re not good at all at telling us why. The study design is not one that supports causal inference.”