American principals are more likely to say their students are poor, when compared to principals in countries where poverty rates are much higher.

A blog post published this week by the Organisation for Economic Co-operation and Development says that when principals in 30 countries were asked about the socio-economic status of their students, Americans were more likely to see their students as poor.

According to the data, 65 percent of surveyed American principals told the OECD that more than 30 percent of their students come from disadvantaged homes. Only 13 percent of U.S. students are considered disadvantaged by OECD standards, though the data does not indicate how these students are distributed among the pool of U.S. schools surveyed for this report. Approximately half of the 29 countries surveyed have a higher percentage of disadvantaged students, compared to the U.S.

The graph below –- made by the OECD -- details the findings. The horizontal axis shows the percentage of middle school teachers “who work in schools where their principal reported that more than 30 percent of students in their school were from disadvantaged homes,” according to the OECD blog. The vertical axis shows the real-world numbers of students who come from disadvantaged backgrounds or have low "economic, social and cultural status" (abbreviated "ESCS"), according to an OECD index. 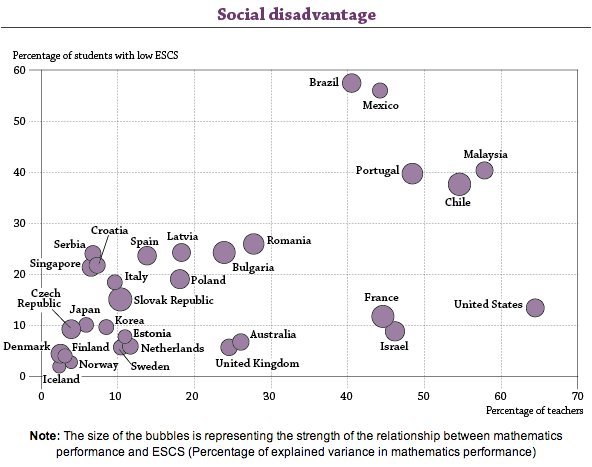 Written by Andreas Schleicher, OECD Director for Education and Skills, the blog post hypothesizes that what is considered poor in places like the U.S. and France might not be considered poor in other countries. He also wonders what bearing principals’ perceptions of their students could have on these students’ educational outcomes, and he points out that low-income students tend to perform better on international tests in places where principals are less likely to perceive them as disadvantaged.

“France has a comparatively small share of disadvantaged students, but school principals perceive this share to be large, and student learning outcomes are closely related to social background -- more closely, in fact, than in any other country except Chile and the Slovak Republic,” writes Schleicher. “More generally, the results show that principals’ perception of disadvantage correlates with inequalities in education opportunities more strongly than real disadvantage does.”

Similarly, a previous analysis from The Huffington Post showed that being poor is less of a barrier to educational success on international tests –- like the OECD’s Programme for International Student Assessment -- in some countries than in others.

"PISA tells us what is possible," Schleicher previously told The Huffington Post. "I hear from many people that poor performance is all about poverty. But we see a lot of countries with a lot of poverty get a lot of good results."

U.S. School Principals Are Quicker To Label Their Students As Poor
Education Leaders Who Have Never Taught