Compared to middle school students around the world, American teens display particularly poor behavior, according to a survey of teachers.

A new brief from the Organisation for Economic Co-operation and Development looks at where teachers and principals are more likely to report having misbehaving middle school students -- and how that connects with school attendance. The brief gleaned its results from answers to a 2013 survey that sampled principals and teachers in over 200 schools in 30 countries or economies.

The brief notes that teachers in places that report having high rates of misbehaving students also say they have to spend more classroom time keeping order, as opposed to teaching.

What's more, about 16 percent of surveyed teachers report severe behavioral problems among their school's students. According to these teachers, verbal abuse and intimidation among students happens on a weekly basis. Teachers in locations that report higher rates of verbal abuse and intimidation among students also report higher rates of students absenteeism, suggesting that the two issues are related, as shown in the graph below. 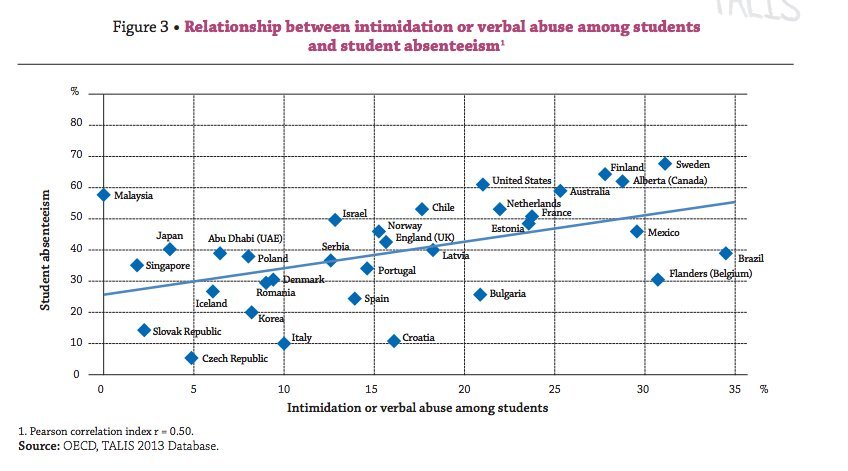 Finally, the brief suggests that including stakeholders like parents and community members in school decisions could help reduce these issues and improve schools' climates.

"Teachers who report working in schools with higher levels of participation among stakeholders are less likely to report high proportions of students with behaviour problems in their classrooms," said the brief. "These results indicate that promoting the participation of stakeholders in school decisions, combined with a culture of shared responsibility and mutual support, can bring about a more positive student behaviour and learning environment."

School Lunches From Around The World
More:
Parents oecd report