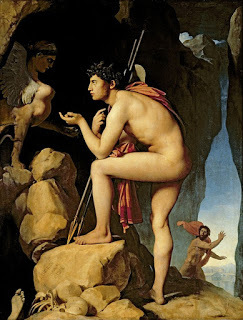 Oedipus was actually unusual. Most people don't leave home when they have the mistaken feeling that their presence is cursed and most people's flight doesn't become a self-fulfilling prophecy. Freud glommed onto the Oedipus myth to deal with childhood sexuality and the stage when a young boy wants to marry his mother and kill his father (as Oedipus did when he killed Laius at the crossroads and married Jocasta). The Electra complex posits a similar paradigm regarding the female offspring whose desire for the father leads to murderous instincts towards the mother. But the real essence of the Oedipus myth resides in the notion of flight and the notion of bringing about a dreaded result. Daniel Kahneman's theory of "loss aversion" where irrationality drives seemingly rational decisions describes a similar set of circumstances. Meanwhile let's deal what would have happened to Oedipus had he not decided to take "the higher road," the morally superior stance which led to becoming the protagonist of one of the great tragedies of all time, Sophocles' Oedipus Rex. Oedipus had what a psychoanalyst might call an overly developed superego, something that worked against him to the extent it was maladaptive and ultimately mitigated against his own survival. But let's take your average Joe or Jane who hears from the oracle, aka his or her therapist that he or she wants to murder his father and marry his mother or marry her father and murder her mother. He or she just keeps going to therapy, which doesn't help the feelings of anxiety, dread and more than occasional impotence or frigidity that accompany his or her murderous wishes. He or she lives a fairly miserable life, racks up enormous bills for the years of treatments, but neither has to leave home nor hopefully murder anybody in the process. Gilles Deleuze wrote a book called Anti-Oedipus: Capitalism and Schizophrenia which attempted to redefine classic Freudian theory. But what about a post-modern playwright who dramatizes what would have happened to a feckless latter day Oedipus who didn't run away from his fears. Wouldn't such an author want to borrow from the fourth and last of John Updike's Rabbit series, Rabbit At Rest and employ Oedipus at Rest as the title of his work?

"Oedipus Explaining the Enigma of the Sphinx" by Ingres (1805)