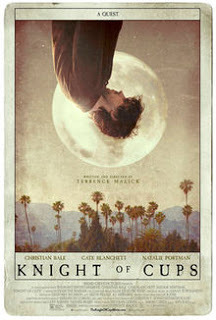 What do Ada Ushpiz's Vita Activa: The Spirit of Hannah Arendt andTerence Malick's Knight of Cups, have in common. It would seem nothing. The former is a documentary about one of the greatest and most controversial thinkers of the 20th Century and the latter is a fiction about an alienated Hollywood screenwriter, Rick, played by Christian Bale. First of all these two unlikely bed fellows both have trouble coming to a timely end and both deal with thinkers. The Ushpiz film, a tiresome attempt to unify a plethora of disjointed material around no theme in particular, repeats the leitmotif of Hannah Arendt thinking with a cigarette in her hand (Arendt was apparently a giant in smoking as well as philosophy, a fact that is also underscored in Margarethe von Trotta's Hannah Arendt in which Barbara Sukowa playing Arendt is constantly puffing away). Rick, like Arendt, is frequently looking out meditatively during the Malick film, but the comparison ends there since what goes on in Rick's head, in contrast to Arendt's well thought out pronunciamentos, can only be called stinking thinking. Do all screen writers walk around Malibu engaging in interior monologues which can be neatly translated into voice overs? Are all seeking to be awakened from an existential sleep and do all of them intermittently find themselves waking up in the middle of conversations that sound like lousy adaptations of Oedipus, Cain and Abel and Macbeth? Do they all look like they have seen Fellini's 8 ½ and Stanley Kubrick's Eye's Wide Shut one too many times and do all their girl friends and especially the one played by Cate Blanchett (Nancy) also look out vacantly as Monica Vitti did in L'avventura after her friend disappeared? Do all Hollywood screenwriters wander around the lots of film studios when they're not attending fashion shoots populated by half naked models? Undoubtedly there are lots of people who have been adversely molded by the unreality of the film industry, but surely not even the most jaded script writer thinks thoughts like the ones that Malick puts into his main character's head. "I dreamt that we were caught in a huge tall wave that engulfed the city," is an example.Yes it's understood that the movie is about a brooding filmic sensibility who, when he isn't staring out at the sea, is wandering amongst rock formations in the desert and who on more than one occasion finds himself staring at a craggy road. But get out! Even by Hollywood standards, this is errant nonsense of the highest order.