The most beautiful meeting room I have ever been to is in the Treasury building near the White House. It is called the
Cash Room
, because it used to contain actual piles of cash when the Treasury was the bankers' bank. The general public could also go there to cash government-issued checks, or change gold and silver.
Now compare this with the den of Satoshi Nakamoto, where the first Bitcoins were minted and stored. 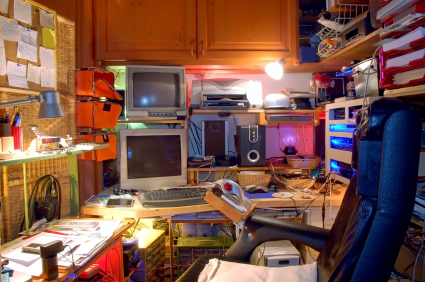 OK, I made that one up, because Satoshi Nakamoto is a pseudonym: we don't really know who created this cryptographic currency and its associated transfer protocols. It might actually be a group of developers rather than a single person.

But you get the idea: digital representation of money and mathematical protocols take a lot less space than physical cash and require no brick-and-mortar security.

When combining the exponential benefits of Moore's law (where every 18 months the same amount of silicon chips can double in power), the multiplying effects of networks (where useful connections increase proportionally to the square of the number of nodes, as first highlighted by Bob Metcalfe), and the algorithmic smarts of 20-somethings out of Stanford University, you get a Google.
While planetary growth has made it difficult for Google to always stay true to its core value of "doing no evil", one has to wonder if a Google-equivalent of banking could not be built with the same mix of computer, Internet and algorithmic wizardry and have a main goal of being an "ethical bank" that does no evil.

After many years of unconscionable risk taking, rate manipulations, customer abuses and self-awarded fat bonuses, banking is in dire need of an ethical offering available to everybody.

While there are plenty of well-run, customer-friendly credit unions and community banks, their scale is limited by their own charter to serving a small number of qualifying customers in a restricted geography.

Back to Bitcoins: the technology was initially deployed with no business rules (and pretty much no business model), resulting in sites like Silk Road using Bitcoins for drug sales, before it was shut down by the Federal Government last week. While the Bitcoin Foundation is putting a brave face on this - see the Washington Post article - there are countless Bitcoin "exchanges" being run by entrepreneurs without a clue about money laundering risks.

Digital payment processing is not the exclusive domain of new new things like Bitcoin: in fact all large banks and the dominant payment networks (Visa. MasterCard, American Express, Discover) are pretty much 100% digital, even if their protocols and algorithms are far from being as smart Bitcoin. These incumbent banking services have plenty of rules and regulations to protect consumers (and themselves), with more to come from the Consumer Financial Protection Bureau. This does not make them ethical, by any stretch of the imagination.

In his book "Jimmy Stewart is Dead" Professor Laurence Kotlikoff suggests "Limited Purpose Banking" as a cure to what he calls the ongoing financial plague. While large established players would have a hard time limiting themselves as suggested by Kotlikoff or dividing themselves up into the required independent pieces, new initiatives, or "neobanks" can easily just focus on retail or consumer banking.

While I am not expecting neobanking initiatives to use the words "ethical" or "sustainable" explicitly in their marketing pitches, nor include "do no evil" in their mission statement, the opportunity is there for entrepreneurs to achieve ethical banking by combining:

I suppose they will both keep an eye on Bitcoins and other new ways to make electronic payments more efficient in the future, like the recently announced protocol by Visa, MasterCard and American Express to make online and mobile payments simpler and safer.

These are exciting times.