I love gin. And normally, I could care less where it's made, as long as it tastes good in my martini or gin & tonic. But Bombay Sapphire's new distillery at Laverstoke Mill in Hampshire, England, which is up and running and opening to the public on Oct. 1, is... well, it's pretty freaking cool.

The first thing that got my attention was the little tidbit that there's been a mill on the site at Laverstoke since, well, probably since 903 A.D., but definitely since 1086, according to written records from the time of William the Conqueror. As an American, where basically no written history exists before about 1600, that's pretty mind-blowing. Laverstoke Mill was used for many things over the centuries, no doubt, but it's most famous for papermaking; the Bank of England used it to make bank notes from the early 18th century until the 1960s. 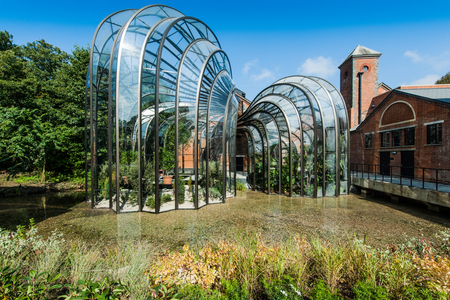 Those crazy looking contraptions are botanical glasshouses, if you're wondering.

Of course, Bombay isn't making spirits in a thousand year old building. When they bought the site in 2010, the mill hadn't been used for a few years and was in obvious need of... more than a touch-up, let's say. It took four years to renovate and rebuild the site -- using building materials recycled from demolished buildings, mind you -- but the final product is in the classic English mill style.

Well, except for the weird glass structures that look like they're being vomited out of one of the buildings. Those are actually the glass greenhouses which contain the ten botanicals used in Bombay Sapphire. That's right, they're growing the damn botanicals on-site (not in the amount they require for production, of course, but still). Not all the botanicals thrive in the same climate, which is why there are two glass structures -- one to replicate tropical climes, and one to ape a Mediterranean climate. In the middle of Hampshire, England. Ain't science grand?

The distillery and new Visitors Centre are located on the River Test. No, not on the banks of the river. The river actually runs through (well, under -- we wouldn't want to get our feet wet, would we) the distillery. What happens if it rains a lot? I have no idea. But from what I've seen of the place in general, it looks pretty amazing.

As cool as the architecture is, as cool as those glasshouses are, as fun as it is to see a river flowing underneath the floor where you're standing, I think the most exciting thing about the new distillery is the chance to see a Carterhead still in action. I'm not sure that Bombay is the only brand to use a Carterhead still exclusively (Hendrick's uses one in conjunction with a different type of still), but it's one of the very, very, very few. An old-school 19th century pot still, the Carterhead uses the "vapour infusion" method to impart the flavor of the botanicals to the alcohol. That means, rather than cooking the botanicals during distillation or infusing them directly into the spirit, the vaporized alcohol passes through a copper basket at the top of the still which contains the botanicals. As it cools and condenses... bingo, gin! (That's a pretty simplified description, I know, so distillation nerds, please go easy on me.)

So you get to see the gin being made, you get to see the glasshouses, you get to see the river, you get to see a bit of Merrie Olde England, and at the end of your tour, you get to have a complimentary cocktail in the Mill Bar. Now that's what I call living. Oh, and you get to experience the joy of being in an environmentally conscious distillery as well. I don't want to get into all the details, in part because I don't really understand them myself, but rest assured that it won some award (the BREEAM) for design-stage sustainability on which they've followed through to construction and completion. The distillery itself is within a conservation area, and it's so well cleaned up that you could go fishing and catch your dinner right at the distillery, if such things were permitted.

Is it worth a visit to Hampshire just to visit the Laverstoke Mill Distillery? I can't say for sure, since I haven't been there yet myself (although anytime you'd like to fly me over, Bombay Sapphire... just saying). But if you love gin, great architecture, sustainability, or all three, and you've got some frequent flier miles, it sounds a lot better to me than Euro Disney.