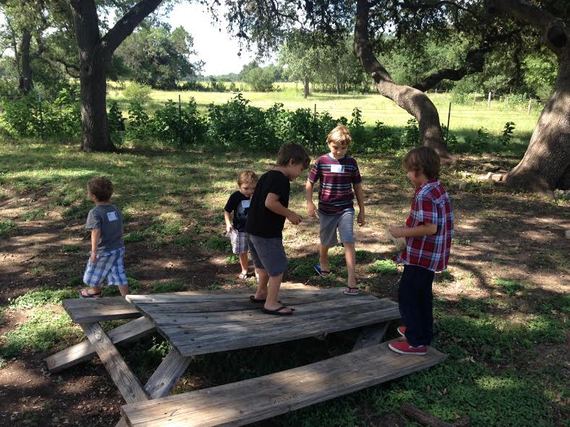 I used to be a perfect parent.

The rest of the time, (which is anytime my kids and I are awake at the same time, in case you didn't catch that) I'm a less-than-stellar parent. I hate to admit this, because I really wanted to join the Perfect Parents club, and I know there will probably be a whole lot of Perfect Parents out there lamenting the fact that I have six boys who should probably only be trusted to Perfect Parents.

Well. I remember being one of those. I remember Husband and I would go out to eat before we had kids, and we would see a kid throwing a tantrum, right in the middle of the restaurant floor, and we would look at each, our eyes screaming it if our mouths couldn't. Never, ever, they said. Not in a million years would we let a kid lose his mind like that.

I would meet a stay-at-home mom in her home to interview her for a news story I was working on, and her kid would be climbing all over the back of the couches and her head and the table while his mother was otherwise occupied, and I would leave thinking, My kid will never be that kid.

I would hear an 8-year-old talk back to his mother, and I would shake my head. Absolutely not.

I wish I could laugh in that clueless woman's face.

So I had kids. I had a toddler who didn't want to leave the park, so he took off running hyper-speed, screaming bloody murder, so people who didn't know I was his mother probably thought I was kidnapping him against his will. I had the boy who thought it would be fun to jump off the upright piano onto the couch and nailed the landing so impressively I was too shocked to even correct him. I had a spirited 8-year-old.

The thing about Perfect Parents is they either have a really short memory or they don't have kids at all--in which case they should stop talking about parenting.

None of us is a Perfect Parent. Sometimes we get really lucky with a kid who has an easy-going temperament (I've got two out of the six). The rest of them trade off being devils on an hour-by-hour basis. It's not because we're bad parents. We're about as perfect as we're probably ever going to be. And that's okay. It's perfectly fine, in fact.

I've worked hard on my parenting over the years. I've read books. I've intentionally used the knowledge I've learned from them. I've worked every day to improve my connection with my kids.

But I'm still far from being a Perfect Parent. If perfect parenting means I have the privilege of getting on a forum and pontificating on the virtues of Perfect Parents who raise perfect children on their merit and skill alone, then I'm not interested. Thanks for asking.

Here's the thing. Memories are often faulty. Looking back, we don't usually remember the hardest parts of parenting, the everyday stuff like tantrums over the blue plate instead of the orange one or the way he totally went all dramatic-crying on us when he stepped on a LEGO we've stepped on a million times and we had to stop the demonic laugh (ours) and the words it carried "YOU SEE? YOU SEE HOW IT FEELS?" We just remember the good stuff, the way he was such a good sleeper, the way he could stay buried in a book for hours at a time but couldn't keep his attention on a math worksheet for two minutes. We remember those moments just before sleep, when he'd sneak back into our room (even though he was told not to) and give us "just one more kiss and hug."

We remember life much better than it actually was. This is a good thing. When I look back over my journals recording my first year with twins, they are filled with desperate cries for help. But what I actually remember from that time is a sweet little baby sleeping on my chest while I tried to quick-clean the living room because the dust on the shelves was an inch thick. What I remember is watching them sit in their Bumbo seats and the way they'd laugh because it was just like looking in a mirror. What I remember most is the way they would smile when any of their brothers came into view.

Perfect Parents like to remember that their kids always did everything they were told. I don't like to speak in absolutes, personally. I do make an exception for this one, though: There is absolutely, positively no kid who does everything he's told every single second of every single day. Absolutely. Positively. None.

The easy kid who today will clean up all the Pattern Play blocks he got out at Quiet Time is the same kid who tomorrow will spend the whole of Quiet Time planning how he's going to run away because he doesn't want to clean up the LEGOs he dumped all over the floor. The kid who says this hour you're the best mom in the whole wide world because you let him color in his coloring book is the same kid who, two hours later, will call you the worst parent in the whole wide world because you said it wasn't time to turn flips off the couch while you're reading stories together. The kid who wants to do a puzzle with you right now is the same kid who, come bedtime, won't even want to kiss and hug you because he doesn't want to be anywhere near you.

We're all just doing the best we can. I make mistakes. I do better. I love. And today I made it through all the hours without thinking about putting them on Craigslist.

At the end of the day, that's really all anyone can ask.