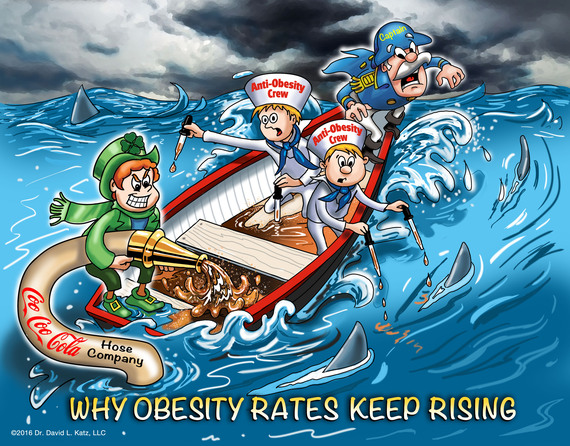 The current (June 7, 2016) issue of the Journal of the American Medical Association devotes much of its rarefied real estate to the current state of the obesity epidemic in the United States, and the news is not good.

One paper, by Flegal and colleagues, reports on trends in adults over the past decade. Obesity prevalence is now over 35% for men, and over 40% for women. The most recently measured prevalence of Stage 3, or extreme obesity, is now more than one man out of every 20, and nearly one woman out of every ten. All of these figures have risen since 2005, although the changes are only statistically significant in women. Let's be clear, the trends in men are bad, too- just not as incontrovertibly bad.

Another paper, by Ogden and colleagues, reports the corresponding trends in children and adolescents, ages 2 to 19. The findings here are carved up into many time periods and age groups, but there is no need to go too deep into such weeds to appreciate the big picture. As shown in Figure 1 of this paper, a graphical display running from 1988 to 2014, rates of both obesity overall, and extreme obesity, have done nothing but rise. The most recent data put the overall obesity rate for those ages 2 to 19 at 17%, and the extreme obesity rate at nearly 6%.

This issue of JAMA allocates additions pages to the implications of ever more obesity at ever younger age for life expectancy itself, and offers up what can only be called a lamentation in the guise of an editorial entitled The Unrelenting Challenge of Obesity.

Of course the challenge is unrelenting; we have never confronted it.

Yes, of course, I am well aware of the innumerable anti-obesity campaigns and programs. I am not just generally aware of Let's Move, the signature offering of the First Lady of the United States and her team, but as the founding editor of the journal, Childhood Obesity, which devoted a special issue to the initiative, very intimately so. I applaud the effort now, as I did then.

I am aware that the Robert Wood Johnson Foundation allocated $500 million to fight childhood obesity through policy change. I am aware of the diverse and good efforts of individual colleagues, and organizations -- from the Center for Science in the Public Interest, to the Trust for America's Health, to all the others far too numerous to list.

And, frankly, there is the 25-year expanse of my own career, largely devoted to redressing this very problem and its ever-proliferating consequences.

But still I say: we have never tried.

By we, I mean the ultimate "we" at the origins of the problem, the great, collective "we." I mean our culture. Our culture is in the business of propagating obesity for profit.

We lament the unrelenting challenge of obesity, but continue to market most aggressively and constantly the very foods and drinks most likely to cause it. We acknowledge that a stunningly dominant expanse of the prevailing diets of children and adults alike is comprised of "junk," yet show no inclination to change this, let alone display any genuine outrage. We are, on a daily basis, manufacturing the growing bodies of our children and grandchildren out of what we all concede is junk, and everybody seems OK with it.

We even know that much of our food supply is willfully engineered to maximize our calorie intake, and propagate something too much like addition to bother distinguishing from it. We know that the big budgets of Big Food allocate payroll to teams of scientists-for-hire, and the very best toys of modern tech, such as functional MRI machines. And we know that these departments are given marching orders to design foods we can't stop eating. We even know these mercenaries of diet work and play closely with their counterparts in Big Tobacco, and we have known all this for a decade at least. And yet, we demand no reckoning.

Consider, as I have before, if we treated drowning in water -- actual drowning -- just as we treat drowning in ubiquitous, irresistible calories and labor-saving technology. I hasten to note that actual drowning remains an important public health problem in its own right, is a tragedy every time it occurs, and has my utmost respect. But since obesity now kills more than one in four of us, and that toll is rising, it is by far the greater menace at the population level. The comparison, though, is about a jarring incongruity in our behavior, not the relative significance of these two public health priorities.

If we treated the risk of drowning the way we treat the risk of obesity, we would certainly have no lifeguards, because they would be "nannies," telling us what to do in an insulting, infuriating manner that implies we can't all just take care of ourselves! We would put no fences around pools, for much the same reason: intolerable nannyism! We certainly wouldn't teach anyone, adult or child, to swim -- because we would simply expect them all to figure it out for themselves. Personal flotation devices? Ignominious.

But we would go well beyond passive neglect. If good for the business of any given beach, we would allow for signs declaring "come on in, the water is fine!" with no mention of toxic tides, sharks on patrol, a sea of jellyfish, or rip currents. That's just what we do when multicolored marshmallows are peddled as "part of a complete breakfast!" because they are "fortified with 11 essential vitamins and minerals!" Technically, I suppose, those claims are true: certainly the fortification must be a fact. And, yes, multicolored marshmallows could be part of a complete breakfast: the really bad part. Similarly, the water might be fine -- but for the deadly rip currents no one wants to mention.

Are you being nannied when a sign at the beach alerts you to rip currents? Would you prefer not to know? Doesn't it put the self-reliance and personal responsibility of you and your kids to a very reasonable test to just... take your chances?

Because if not, I am having a really hard time making any sense out of our cultural response to the massive public health calamity that is epidemic obesity. It is taking years from lives, and life from years. It has been doing so, unrelentingly, for decades. Unrelentingly, because we -- in our collective, meaningful, righteous might- have never even tried to fix it.

In fact, we have gone one step beyond mere dithering. We have now established a booming cottage industry in competing theories about why we have failed to fix obesity thus far, as if it weren't all readily explained by the leprechaun in the room. The forces conspiring to cause obesity, and profit from it, are orders of magnitude richer, more powerful, more prevalent, and more influential than those working to fix it -- and the former are aided, abetted and appeased across the length and breadth of our culture.

Obesity rates keep rising. We are all in the same boat, and it is sinking -- along with life expectancy. Shouldn't we be surprised, considering how furiously the anti-obesity crew has been bailing?

Not at all. We are bailing with pipettes. The ship is being flooded with a fire hose.