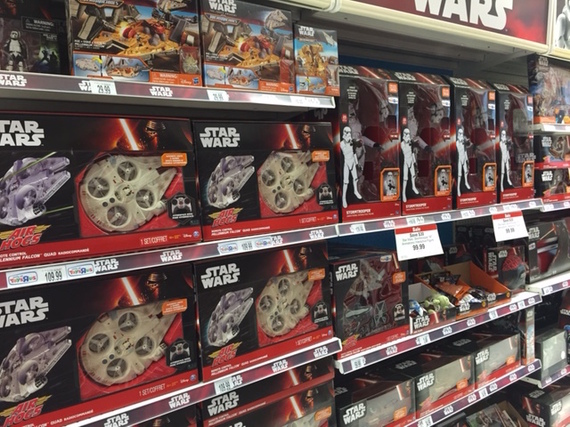 "For I brought you out of the land of Egypt, and from the house of slavery I redeemed you, and I sent before you Moses, Aaron, and Miriam." (Micah 6:4)

Parts of the Internet erupted in a furor this holiday season when it transpired that a boxed set of action figures depicting characters from Star Wars: The Force Awakens omitted a figurine of Rey, the female lead of the film, the series' new hero.

And no, not diminutive 'heroine,' à la Princess Leia - and à la Miriam in our Torah, who never quite emerges from the shadow of the brother she saves in our reading this week - but 'hero,' the character whose journey and development constitute the essential arc of the story. Rey gets more screen time than the new swashbuckling pilot, Poe Dameron, more than the old swashbuckling pilot, Han Solo (in fact, she gives Harrison Ford's character a good run for his swashbuckling, and his piloting), and on Rey's account the new Star Wars movie even arguably passes the Bechdel Test: she and another female character with a name have at least parts of a conversation with one another that are not about a man.

(And yes, Star Wars is featuring in my message of Torah for a second week running. What can I say? I am a child of the original, 1976 film.)

Toward the end of the biblical book of Genesis, which we finished reading last week, we find a list of "all those of Jacob's household who came into Egypt, seventy persons." Notably, if not improbably, the count consists entirely of men, with one exception, in the family of Asher, where we find "...and Serach, their sister." So, if the toy company judged that a female action figure would keep its play set from flying off the shelves, it was granting present-day children one seventieth less credit in that regard than our Bible gave ancient Israelites.

Serach appears once more in the Torah, much later on, in the book of Numbers, when Moses conducts a census of the Israelites in the wilderness, and again, in a sole mention of a female name, we read, "...and the name of the daughter of Asher was Serach." On that basis, our ancient sages proposed that Serach, the daughter of Asher, lived all the way through all the generations of Israel's captivity, through the Exodus and the generation of desert wandering, and even - why not? - into the time of King David, some four hundred and fifty years later.

"I completed the minyan of Israel in Egypt," Serach declares, in a refreshing use of the traditional term for a stipulated number, when she calls out to David's military chief of staff, Yoav, according to the rabbinic elaboration of a story in the Second book of Samuel, taking Yoav by surprise as the peace-making "wise woman" of a city in the hill country of Ephraim that he has somewhat wantonly besieged.

How did Moses know where Joseph's bones were buried, so as to fulfill the promise of carrying his remains out of Egypt? Serach told him. She had been there when Joseph died. On what basis did the Israelites finally accept Moses in the story we read this week? According to our rabbis, Serach kept a "secret of redemption" passed through her family from the time of God's promise to Abraham, and she waited for generations for someone to appear and pronounce the secret words.

In fact, just about every time a helpful and mysterious female figure appears in scripture or is required by legend, one can count on our ancient rabbis to consider Serach the daughter of Asher a likely suspect. For more than two decades now, I have kept a file-folder titled "The S Files," and I suspect I have not finished adding Serach-tales from traditional sources to it.

The Talmud and the mystical Zohar say that Serach, like the Prophet Elijah, "entered the Garden of Eden without tasting death" - which I consider should make Serach a more ready candidate than Miriam for having a special cup in her name on the Passover Seder table along with Elijah's. I get a bit uneasy when a new Miriam-song is added to the traditional Elijah-one - after all, we know where Miriam is buried, as far as scripture is concerned, so while Miriam may "dance with us" again when the dead are resurrected, Serach, according to the most venerable sources, is still very much around and available to join Elijah at Seders, and in times of need. Now there's an unsung secret of redemption.

I have even added my own exegetical conjecture to the file, over time. When Joshua, Moses' student and successor, passes away, he is buried in the city of his elder years, a place he requests as an old man, after his valedictory speech to the people, a town called Timnat-Serach in the hill country of Ephraim. (Joshua 19:50, 24:30) I have not yet found any ancient source that makes a point of this, but if you were Joshua - one of two men to have lived all the way through the Exodus and into the Promised Land - would you not wish to hang out, in your retirement, with someone who had seen it all as well? I picture Joshua and the even older Serach sitting on a hillside in Ephraim, musing together about young people and what's becoming of the land.

On the one hand, it is encouraging to see our sages build such a rich and wondrous female character out of scant scriptural hints. On the other hand, there is actually something discouraging in so much getting heaped on one rare female personage. An unnamed "wise woman?" Oh, that must be Serach - as though there could be no other.

Now, what to make, exegetically, of the fact that the figurine of BB-8, the Star Wars franchise's adorable new robot, comes packaged under the plastic of Rey's container, rather than with Poe Dameron, the male character who actually brings the droid into the story? It seems all to be about whom we consider capable of standing in her or his own right as an action figure - a timeless and worthy spiritual goal.