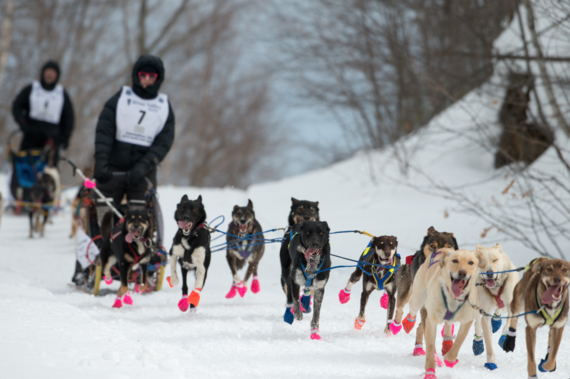 A chill wind blows through Blair Braverman's powerful memoir, Welcome to the Goddamn Ice Cube, but it doesn't emanate only from the story's frozen landscape. It whips up on page two when a man at a campfire gathering yanks down his pants, exposing himself. "I could have fucked you," the sixty-year-old declares to the twenty-four-year-old Braverman. "Once in my life, I sure could have fucked you." A paragraph later, another man wraps his arms around her from behind. "Treasure, you're north of the moral circle now," he whispers. On page fifteen, another pats her breast.

Early on, I understood that sled dogs would not be pulling this story, which chronicles Braverman's search for adventure, identity and belonging in the world's arctic regions. Her abuse by men begins in the home of her Norwegian hosts during a high school year abroad and continues through her first sexual experiences with a bullying, manipulative boyfriend. For better or worse, by page 154, she has developed a tougher skin and is able to set certain limits. "It's okay for you to touch my hair," she tells a stranger as if he were a child, "but please don't lick my neck." Part of me wanted to shut the book before another man did something awful. I didn't, because I recognized that Braverman, an unflinching journalist, has written something extraordinary.

From descriptions of the book, you might expect an exotic travelogue bristling with the particular challenges of living in the far North. There are plenty of those: extreme cold, months of darkness, strenuous physical work, a dearth of basic comforts. Perhaps, as someone who early on aspired to be a writer, Braverman sought out this wild territory knowing it would provide her much to discover and write about--presumably much more than she could mine as a student in her own country.

More, for sure, in the details. But not so different in the lessons learned and their lasting impact. Because while we are treated to spell-binding scenes involving dogsleds and blizzards, unlikely friendships and unforgettable characters, at the story's center is Braverman's clear-eyed, at times heartbreaking account of navigating a space that is not unique: the wilderness that is the world of men. That wilderness is everywhere. Braverman might have found it at college along with the stunning number of women who are sexually assaulted on their campuses; the revelations she has in remote places could have come to her in the shower of a dorm:

I knew I would never be a tough girl. And yet the phrase, with its implied contradiction, articulated everything that I wanted for myself: to be a girl, an inherently vulnerable position, and yet unafraid.

The thing was, nothing that had happened to me...was beyond the normal scope of what happened to women all the time...What woman hadn't experienced those things? It made me the same as everyone else, and luckier than many. It was just a natural result of being female and living in the world.

Indeed--what woman hasn't? Therein lies the power of Welcome to the Goddamn Ice Cube: it shows us that "the normal scope of what happened to women all the time" deserves our full attention. What happens to most women are not unimaginable, sensational crimes, but smaller, repeated violations that if not known by us, are fully imaginable. Braverman shows us how they happen, how and why we often dismiss them, and how easily they can strip away a woman's power, leaving her in sometimes paralyzing self-doubt and fear.

Braverman returns to her beloved far North again and again to face her fears: physical hardship, crashing her dogsled, getting lost, loneliness. But there is no way for a woman to conquer her vulnerability to men who might abuse her; there is only vigilance. In one of the book's most achingly intimate passages, she shows us how trauma from her first sexual relationship reverberates, making what should feel normal feel exceptional:

It would be two years before I slept with anyone else, before I met a shy boy--in the library--whose lips I thought about at night, who kissed me gently before the first time we had sex and whispered, "We don't have to do this if you don't want to." I almost cried. It hadn't occurred to me that even then, lying naked beneath him, I still had a choice.

When I read these lines, I couldn't help wishing Braverman had had her own book to read when she was sixteen. But she didn't, and as a consequence, she has given us a richly insightful work whose bold, but delicately delivered honesty has much to teach us. For young women, especially, the memoir is as much a cautionary tale as it is an inspiration. And for young men? It should be required reading. Because unless their mothers, fathers or teachers are willing to explicitly instruct them on how to be with women, they have mostly their own, often injurious, experiments with girls and women to learn from.

They can also learn from reading stories. Whether it be in an explosive letter to her convicted student rapist that goes viral on the Internet or in a memoir that elegantly unfurls to reveal ordinary acts of violence, more and more women are writing about intimidation, harassment, abuse and assault by men. Every one of their stories becomes an act of activism because research has shown that reading builds empathy. As author and philosopher Alain de Botton states:

A story...takes us inside the intimate consciousness of strangers, it lets us sit in on experiences that would be terrifying or reckless in reality; it lends us more lives than we have been given... Stories...give us early warnings. They alert us to dangers that we're not adept at recognising: where envy might lead us, what indifference can do to a relationship, where lust can drive us...They trace the links between apparently minor errors of personality and the monumental catastrophes they can unleash, in the hope that by showing us the pitfalls, our own tendencies to disaster and folly may be curbed.

Stimulating empathy in our readers might not be our most intentional mission when we set out to tell our stories, but it might just be our most valuable. Welcome to the Goddamn Ice Cube is gorgeous, moving and universally resonant. But most of all, it's important.