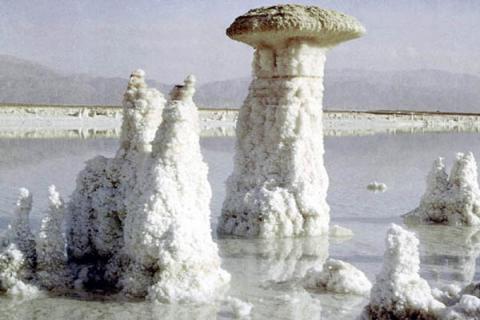 I am thinking quite a bit this week about Lot's wife, way back in the book of Genesis, mostly because a song inspired by her story, written by my friend the poet Alicia Jo Rabins, about looking back lovingly, is on loop in my mind; a love song to Sodom - which could use a love song.

But what has that to do with the mountain of meticulous laws, the Torah's vision of a just society, that we find in our reading this week, in Exodus, fast on the heels of the Ten Commandments?

Lot's wife, let's remember, looks back, as she and her family flee the doomed city of Sodom, and is turned into a pillar of salt. Sodom, let's remember, is storied biblically as a city so devoid of consideration that Mr. Lot can think to offer his daughters to a mob outside his door for the sake of quieting his prying neighbors.

It only occurred to me this week, listening to Alicia's song, that what was memorialized of Sodom, in the end, in the dream-time legend-monument of the Dead Sea salt formations, was, finally, a loving glance. 'There was something to us there, something dear and worthy of care,' Lot's wife's look back at her fading city seems to say - and that moment becomes the snapshot for all time, and all that remains.

My great senior colleague and teacher, Rabbi Art Green, likes to observe that there is something of the morning after to this week's Torah-reading. Following the fireworks of last week, the lightning bolts and the elemental imperatives in the story of revelation at Sinai, it is as though the Children of Israel wake up in the harsh light of the next day to realize they have got themselves, by way of an enthusiastic moment, into a heap of rather less rhapsodic responsibility.

Another thing from the week: Having spent many of its interstices on a hunt for a new camera, as I pick up again a way of looking at the world that I like very much, and having come to the conclusion that the instrument I want is one that is only about to be released by its company in a few months' time, I have wound up with an anticipatory collection of lenses, in stock and obtainable here and there at below-list prices in this lull between new models of the camera. Beyond reflecting that, for this moment, Art (who collects antique glass lamps of the whale-oil age) and I are both glass collectors (the lenses of one's kit being called in photographers' jargon one's 'glass'), a classical rabbinic admonishment comes to my mind in a goading way, a critique of one who 'expounds well' without 'fulfilling well.' It is not enough to have good lenses, this tradition of ours reminds me pointedly; one must also shape one's acts accordingly. And that's, as it were, a horse of a different ballgame.

A lens, where I came of age, in a German-speaking country, is called an objektiv - an 'objective,' to translate most directly, "the optical element that gathers light from the object being observed and focuses the light rays to produce a real image," as the technical definition runs.

In our Israelite inheritance, the objectiv, so to speak, is our caring awareness of the other - the regard that perceives in another human being an image of the Divine, impelling us to behave and to shape our social world accordingly. That is our lens. It is, if you will, the objective of our tradition.

There is room for rhapsody in that, and romance. In fact - Galician that I am in this often rather Lithuanian world of Harvard (but that's another whole set of Jewish definitions) - I will insist that something of the romantic sensibility is required. "There is no end to our experience of the dangerous grandeur, of the divine earnestness of human life," said Rabbi Abraham Joshua Heschel (Art's teacher), and so we are aware, Heschel said, "that the world is more than the world." Heschel taught, "We are the dawn and the dusk, the challenge and the test." Seen through his lens, "we carry the gold of God in our souls to forge the gate of the kingdom." That's romance, not to mention beautiful expounding - and, as to action, it came from the man who said famously that when he walked with Dr. King in the South, he felt as though his feet were praying. "Loyal to the presence of the ultimate in the common," Heschel said, "we may be able to make it clear that man is more than man, that in doing the finite we may perceive the infinite."

Sometimes it dawns on us in retrospect, as with Lot's wife, when we revisit what another of Art's students, Rabbi Ebn Leader, and I, in our study together this week, called 'The Sacred Palace of Left Behind Beginnings,' in the spirit of Alicia's song. Then bygone moments - hardscrabble, awkward, and at odds as they may have been - come into their poetry and their divinity at last. But whenever and however it dawns, the awareness is, dare I say, monumental. We cannot go back in time - nor would we always want to - but we can go forward, at last, with a heart more full of love.

May our eyes be opened in that way when we are still blessed with life and suppleness enough to do something about it.