"The more I see of the country, the more I want to, and I can see no end of, the species of butterflies when the whole country is well explored. Remember me to all friends."

So wrote the ineffable and still under-appreciated naturalist, Alfred Russell Wallace, to his agent in the 1850s during his four-year explorations in and around Amazonia and the towering mountains that make up the western spine of the continent, the Andes. The Andes, particularly the eastern slopes as they descend into the Amazon, are the most biologically rich and diverse region in the world.

The astonishing diversity is found with the altitudinal variation, with numerous and distinct vegetation zones that run from high elevation (ca. 16,000 feet) to the Pacific Coast on the west and near sea-level on the Amazonian side of the east. The Andes contains some 30,000 vascular plant species, of which some 50 percent are unique. Roughly 1,700 bird species occur on the Andes, with one-third unique. 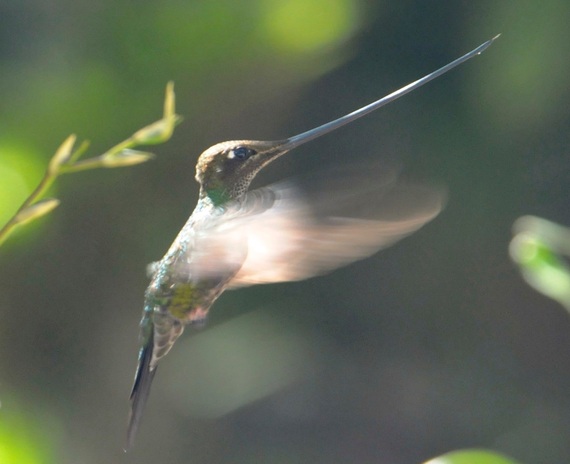 The astonishing Sword-billed Hummingbird of high elevation forests in the Andes. This species was seen in mountains above Quito, Ecuador. Photo: Steve Zack ©WCS

I recently had my first visit to the heart of South America with meetings in Quito, Ecuador (10,000 ft), followed by a vacation trip to Machu Picchu (8,000 ft.) and then down to the Peruvian Amazon (ca. 600 ft). I have spent considerable time in Venezuela and explored the Patagonian coast of Argentina. Yet it is the tropical Andes where the greatest biological diversity is and my first, brief, exposure to it was amazing.

As with Wallace, the more I saw, the more I wanted to see - and there really is no end to the diversity to be seen.

Alexander Von Humboldt was the first westerner to characterize the biological richness of this region - in the early 1800s. Charles Darwin was here, too, on his Voyage with the Beagle, traversing the Andes in 1835 from Santiago, Chile to Mendoza, Argentina.

Wallace's contributions and understanding of South America would be more appreciated if all his collections had not been lost in a shipwreck when returning to Europe in 1852. Henry Walter Bates traveled to South America with Wallace and his discovery and evaluation of the world of animal mimicry resonates today. These men created an intellectual shadow as imposing as the physical shadow of the Andes. 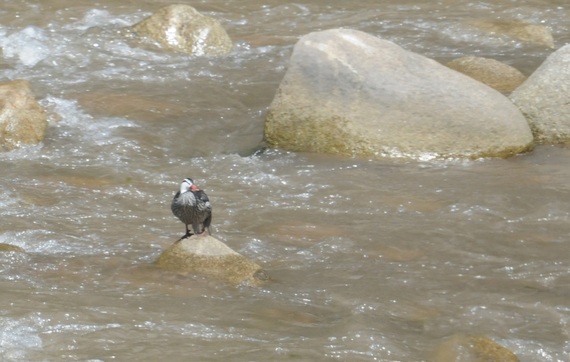 The Torrent Duck is an enigmatic waterfowl species restricted to fast-flowing streams in the Andes. This one was seen on the Urubamba River near Machu Picchu. Photo: Steve Zack ©WCS

Naturalists, I contend, are born and not made. The passion for experiencing and knowing nature is insatiable for them, well beyond the common "love of nature" that almost all feel to some degree. My numerous naturalist friends rarely "breed true": few offspring are smitten with the same zeal for nature in spite of the heavy doses given to them from their well-meaning parents.

One of the durable joys of nature travel is encountering the naturalists from around the world. My own global travels have consistently been enhanced by finding fellow naturalists who, regardless of culture or native tongue, share will me the unspoken but readily expressed zeal for nature.

Local villager Loret Rasabo was that for me in my remarkable years in Madagascar, for example. (I should point out that all famous naturalist explorations, Darwin's included, were made possible only because the explorers met and worked with local guides who knew the local biodiversity and shared it generously with their visitors.) 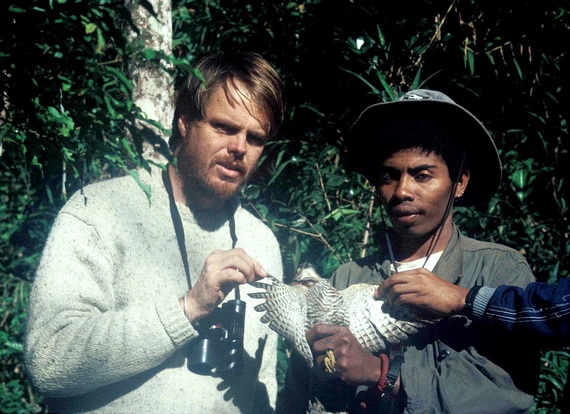 With Loret Rasabo in Madagascar in the 1990s. Loret has a passion and insight for wildlife like that of other naturalists. Photo: Steve Zack ©WCS

In Quito I encountered George Cruz, who manages a series of eco-lodges at different elevations in the Ecuadorian Andes. Cruz is an impressive naturalist and entrepreneur, with an attractive book on regional birds and another detailed tome on medicinal plants. We stayed at his high elevation hacienda above Quito and hiked with him there and then at a lower-elevation cloud forest. We saw many splendid creatures, with the improbable Sword-billed Hummingbird a spectacular highlight. 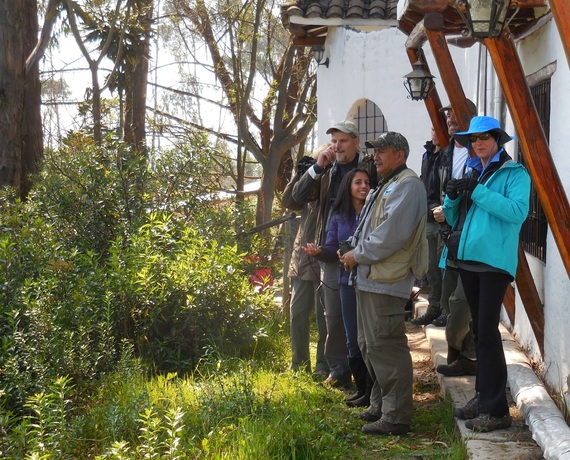 Of course in the high diversity regions like the Andes as is true elsewhere, the battle is ongoing to protect and conserve wildlife and wild lands. There is a race of sorts to understand where to invest resources to protect the most diversity.

Alwyn Gentry, perhaps the greatest botanist specializing in tropical plant diversity, was part of that race. I met him while I was in graduate school in New Mexico in the 1980s. We shared a zeal for the wondrous variety of flora to be seen and discovered, and I was thrilled to have the opportunity to point out an Alligator-barked Juniper - a new species for him.

In 1988 Gentry was in a small plane with the most famous South American ornithologist, Ted Parker, who knew thousands of species by sound alone. They were participating in rapid surveys of remote areas - Gentry for the plants, Parker for the birds - that led to the creation of several different reserves. Tragically, their small plane crashed into an Ecuadorian cloud forest in 1988, and both died.

The zeal to protect the Peruvian Amazon rain forest from logging and mining has cost no fewer than 57 environmental activists their lives in recent years. 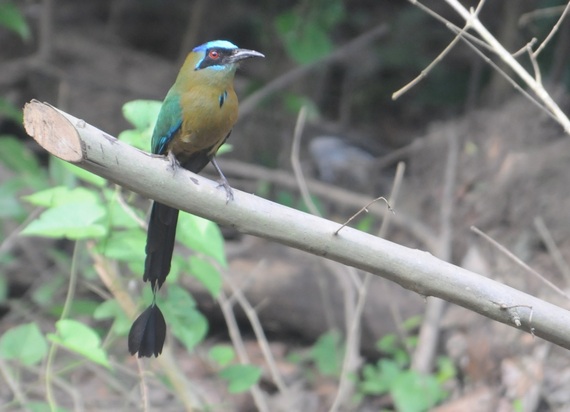 Amazonian (or Blue-crowned) Motmot in Amazonian Peru, not far from the Andes near the Madre de Dios River. The unique racket-shaped tails are slightly longer in males compared to females.
Photo: Steve Zack ©WCS

Our natural world, so wondrous and so valuable to the quality of our lives and to the integrity of our breathing planet, needs a renewed commitment to its conservation. I belong to an organization, one of many, that attempts to conserve our wild places and our wildlife. I am one of many naturalists, past and present, blessed by seeing a world of nature and challenged to protect what is left.

We are driven by the same concerns that occupied Alfred Wallace nearly a century and a half ago. And though the stakes have perhaps never been higher, we must not flinch from our responsibility to protect and conserve our precious natural heritage.