The French philosopher Michel Foucault made a significant contribution in molding our understanding of the nature of power. He veers away from individualist ontologies which conceive power as concentrated and controlled by atomistic, rational and possessive men whose interests are formed prior to social interaction.

Instead, Foucault argues that 'power is everywhere'. It is dispersed and embodied in discourse, knowledge and 'regimes of truth'. Power is in constant flow and negotiation, and is reinforced constantly through our education system, the media, and the flux of social, political and economic discourse.

So why do we need to understand power?

Power plays a huge role in constructing the truths that we perceive as individuals and as a society. There is no truly universal truth at all. The truths that we know are the construct of the political and economic forces that control the majority of power within the societal web.

Power, in all its manifestations, creates a 'discursive practice' or a body of knowledge, a belief system and behavior that dictate what is socially deemed as 'normal', 'acceptable', 'deviant', et cetera. In essence, truth is produced by power.

We need to understand power because it establishes boundaries that allow and limit possibilities for action. It dictates what we can do and cannot do. It limits the options that we could take to better ourselves and society.

Let us consider profanity in formal settings as an example. Consider the fact that if we hear somebody constantly swearing during a formal speech, we judge them as 'deviant'. This can be associated with our religious-based education system, the media and mainstream political discussions on profanity. These forces of power 'normalize' the social construction that profanity signifies low breeding, is unintellectual and detracts from the grace of conversation.

This is despite a recent study showing that swearing can be a sign of intelligence and can actually achieve a number of communication outcomes.

In short, power favors "a" certain truth, not "the" truth, and we help normalize this favored truth.

It is important for us to be critical of power and the truths it cultivates because they discriminate and create 'The Other' within a certain group or society (e.g. women, Muslims, et cetera). They often reinforce social structures that hinder human freedom and societal transformation.

Needless to say, the Philippines is one of the most, if not the most, corrupt countries in the world. Under the shawdow of a 2015 survey, the New York Times considers the country "the most corrupt in Asia." It is as if the Philippines and the word "corruption" cannot exist without the other.

A Political Science professor and scholar argues that the Philippines' traditional political (trapo) parties play a vital role in the normalization of political corruption in the country. In his revealing article, Dr. Quimpo mentions:

The Philippines' main political parties are not political parties in the ordinary sense. A political party, as commonly defined and as defined by the Omnibus Election Code, is an organized group of persons pursuing the same ideology, political ideas or platform of government. Joel Rocamora quips that nobody can accuse any of the country's main parties of being such an animal. Ideologies and platforms are just adornments for them. An editorial in the Philippine Daily Inquirer (January 13, 2004) aptly describes what their programs consist of: "The usual motherhood statements are passed off as political programs." They too can be changed or discarded anytime. Any group that hankers to be called a political party can go to Claro M. Recto Avenue and have a neat collection of motherhood statements (aka program of government) produced overnight.

He was also skeptical about the notion that the Philippines restored its democracy after the fall of the dictator Ferdinand Marcos. He states how political scientists were inclined to, instead, qualify Philippine democracy with a gamut of deprecatory adjectives: elite democracy, cacique democracy, oligarchic democracy, low-intensity democracy, a "weak state" captured by an oligarchic elite, et cetera.

With the use of their political machineries and influences, these trapo parties have been very methodical in maintaining the present power structure that benefits their interest. The first EDSA Revolution didn't bring the significant change that many people had hoped for. The traditional politicians wanted to stay in power by hook or by crook.

And as citizens of this country, we play an integral role in the normalization of corruption, and thus, the creation of our own misery, and the aggravation of poverty and social injustice in our society.

By! Electing! These! Trapos! Into! Positions! Of! Power!

We normalize corruption by legitimizing the power held by these politicians. And they have understood so well our way of thinking that they have become so adept in manipulating and brainwashing us. In order to manipulate us, we have allowed them to define what is normal (e.g. "Duterte isn't fit to become a leader because political leaders shouldn't be as candid!" or "Our next president must be decent!"). This is despite the fact that what they perceive or decree as abnormal isn't necessarily absolute.

In giving meaning to normality, the power structure must identify the trends in society to delineate what they consider as normal in order to subjugate the minority (e.g. The power structure cultivated by the political, social and intellectual discourses on Filipino nationhood have marginalized the 'truths' of the Moro people in Mindanao). Therefore, until a group of periphery citizens resist against the present power structure and subsequently craft laws and policies to acknowledge their 'truth', their social exclusion and relegation to the fringe of society will be preserved.

While his notion of power may be elusive and detached from agency or structure that there seems to be diminutive possibility for pragmatic action, Foucault believed that change can be made through action and resistance. The man was a dynamic political and social critic who saw the role of "organic intellectuals" who speak for the interest of a specific group or class in the society.

Unlike traditional intellectuals who are bound to the institutions of the status quo or the hegemonic order, organic intellectuals aim to win consent to counter-hegemonic ideas and ambitions.

And this is where I would like to call on every Filipino to become organic intellectuals for the common people; to engage power and not become subservient to it. We need to challenge power because we cannot choose to be passive victims of inequality, injustice and oligarchic tyranny anymore. We can do this spurring discourse on important social and economic issues. But most importantly, we can achieve this endeavor by denying our support for trapos who use our taxes to elect themselves in government seats; who think our hard-earned money is theirs for the taking.

For as long as we keep electing these kinds of politicians who operate via their parties' political machineries in order to get themselves elected, we will never be able to denormalize corruption in this country.

We need the people to be angry and demand the stop of the abuses by the elites and the intellectuals who are as responsible for keeping the trapos in power. We, the people, need to make it known that we are fucking sick of being dictated by the media and all their portentous pronouncements and pretentious antics.

We need genuine people in the government who will change the dynamics of our politics. We need someone who will empower us and strike fear in those who lead us across the board.

Duterte represents a political change. He is a paradigm shift for traditional politicians in the Philippines. He is unapologetically politically incorrect but compassionate and intelligent. He can be tactless and indiscreet but he is transparent and speaks the truth. He is a man of many contradictions but he is far from being a two-faced politician, speaking out of both sides of his mouth. 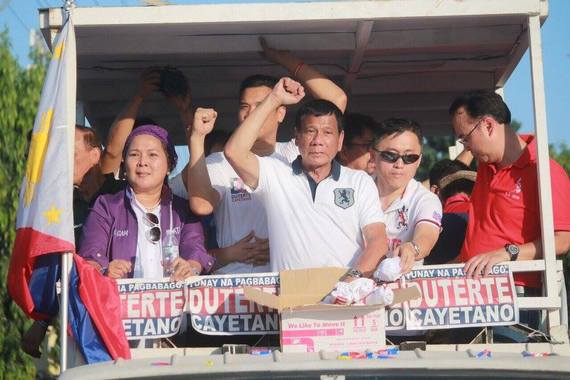 Duterte speaks candidly without fear of the political consequences of what he says. Despite the risk of losing the Catholic electorate, he chastised the Catholic hierarchy for their opposition to the Reproductive Health Law and stated that he would abolish Congress once elected.

He expressed support for same sex marriage, a policy that many trapos deem as we are not ready for. What the fuck does that even mean?

And despite possible backlash from the elites and trapos in power, Duterte is the only presidential candidate bold enough to propose a radical restructuring of our present political system that have served us so poorly.

Not to mention, he has a track record of good and progressive governance.

Duterte could spur rapid change and stir the country towards a more positive direction. But it is up to us, the people, to decide if we want to effect this change.

The real political task in a society such as ours is to criticize the workings of institutions that appear to be both neutral and independent, to criticize and attack them in such a manner that the political violence that has always exercised itself obscurely through them will be unmasked, so that one can fight against them.