Meet the undeniably adorable Ecocapsule, a tiny (approximately 8 ft. by 14 ft. by 7 ft.) self-sustaining portable house that can be plunked down pretty much anywhere sunlight is available to provide an extremely intimate living situation for up to two people. Designed by Slovakian firm Nice Architects, every possible off-the-grid angle has been covered to make the Ecocapsule functional no matter how far afield you take it. Inside you'll find a bed, hot running water, a flushable toilet and a kitchenette in which you can prepare hot meals.

The Ecocapsule's power comes from its built-in 750W wind turbine and 28 square feet (600W) of solar cells on its roof. Add to that a 9,744Wh battery, and the home should be able to keep on chugging along for up to a year, according to its designers. Its shape is optimized to collect rainwater and dew, and built-in filters let you tap into virtually any available water source.

Nice Architects says that the Ecocapsule fits into a standard shipping container and is easily "shipped, airlifted, towed or even pulled by a pack animal." That's great, although the fine print notes that shipping costs will be high, up to $2,400 from its home base in Slovakia to, say, New York. 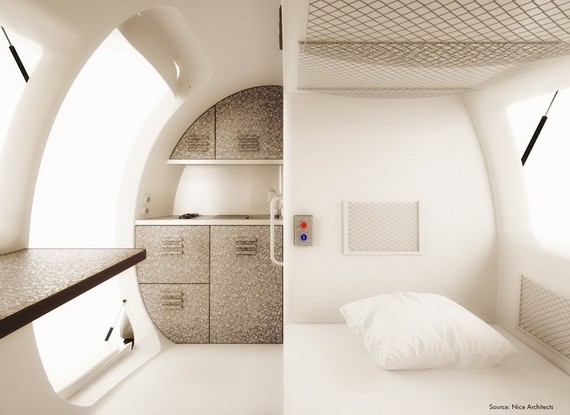 So can you buy one? Not yet. A functional prototype is complete, and Nice Architects says it's "currently busy with preparation of the production." It will take pre-orders in the fourth quarter of 2015 with an eye toward delivery in the first half of 2016. How much will it cost? The fact that no one is saying suggests that the price for this kind of solitude will be pretty expensive.

With its shiny silver exterior and rounded shape, many have compared the Ecocapsule to the venerated Airstream trailer, which helped usher in the era of luxury camping (also known as "glamping"). And while its designers make no attempt to hide its well-appointed features, they do point out that the Ecocapsule would also function as a self-sustaining research station or as an emergency shelter in disaster zone.