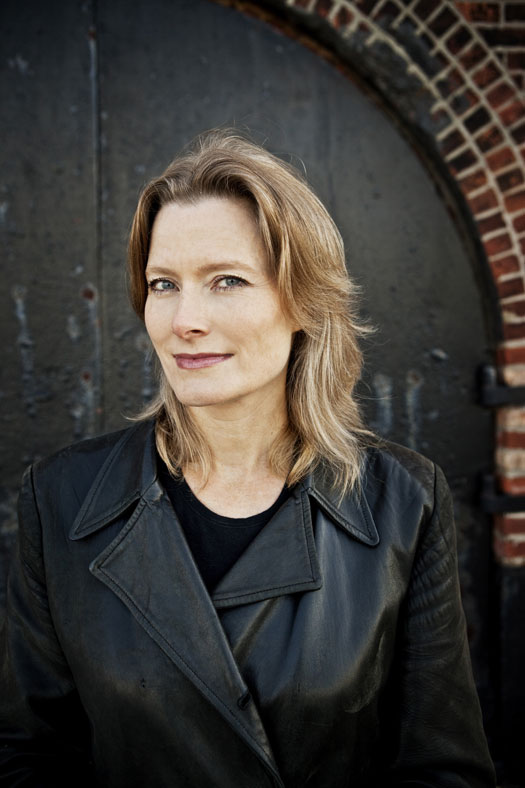 It's summer. Some people curl up and re-read Proust.

I think she is such a powerful writer that I could not put her books down. I was in the midst of launching the Stieg Larsson trilogy and instead read Egan's newest novel, A Visit From the Goon Squad then her first, The Invisible Circus, and then Look at Me in three straight days.

She understands women, especially young women, better than almost anyone. Egan's young women wear their freckles like Lisbeth Salander sports tattoos, each one a testament to some hard won bit of wisdom as they grow up.

She knows how to write about sex--and especially sexual initiation--without making you squirm. Journalists come in for a rough ride. Sigh. Even though Egan also writes journalism. She is suspicious of journalists: they aren't who they seem. They are desperate. She is sympathetic but wary.

She writes men and gets inside their heads as much as women, though her men, from terrorists to professors to translators, feel like they have introspective qualities many men don't.

She loves mysteries. Alongside Larsson one sees that Egan, whose work is much deeper and more complex, does a sophisticated version of the whodunit that has you--and her characters--at the edge of a cliff.

She believes in roundelays of plot and sex. Characters bump and collide, coincidence notwithstanding. We are all one degree away from each other, not six, according to Egan.

Egan made time to go Off the C(H)uff with me this week. 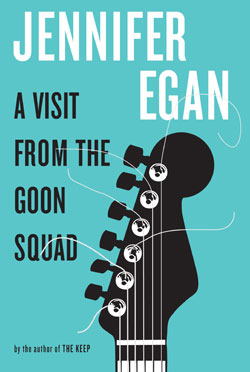 CZ: Writers generally hate it when they're asked about how closely their fiction hews to their lives, but after a marathon week with your work, I feel I must. Did you grow up with an older sibling or a parent who worked in the music business? Was your mom a single mom for at least some of the time? And did you have a sibling who either got sick or whose life was shortened in some tragic way?

JE: Now you're going to find out what fictional liberties I'm guilty of; the answers to your questions are no, no, and no! I've never known anyone who worked in the music business. My mother and father divorced when I was very young, but she remarried soon after. I don't have any older siblings, and all of my younger siblings are alive and relatively well. But in a sense, my answers now are too simple; writing fiction is all about extrapolation, so there has to be some connection to my own life that makes it possible for me to fabricate with empathy and confidence. My stepfather was a charismatic financier, and I grew up with some proximity to the world of business, if not the music business. I'm the only product of my mother's marriage to my father, and since the two of them were deeply estranged, and since I remained with my mother (and physically resemble her to an uncanny degree), the bond between us has always felt deep and exclusive; and while I'm much older than my half-siblings (both my mother and father had more children), I have of course fretted over their ups and downs through the years. CZ: Though you were born a decade late, you seem to have been defined by the Sixties. People who were adolescent then are tired of hearing all of us say it was, so far, the most interesting time to come of age. Yet you have not only embraced these years but have made their themes--sex, drugs, rock and roll, politics, and the subsequent disillusionment and burnout--the calling cards to your work. Why, and what was missing from your own era that they were so easily able to eclipse it?

JE: I'd say that I've been defined by missing the Sixties. My mother and stepfather moved us to San Francisco in 1969, when I was seven, and I grew up there convinced that everything spontaneous and raw and thrilling had passed me by. Had I actually experienced the sixties, I might have a more nuanced memory of that era. I guess what I'm saying is that in San Francisco, anyway, "my" era was mostly about processing the era that had just passed. Until the punk rock scene of the late seventies, there wasn't much, counterculturally, to compete with it.

Looking back, though, I'd say that my era has actually been defined by dizzying technological change. I grew up before there were answering machines, and in 47 years I've watched us hurtle into a hyperconnected state whose implications none of us can fully grasp. Funnily, the origins of that change can be traced right back to the San Francisco Bay area in the 1970's--the very same years when it seemed like nothing new was happening! Things were happening, it turns out, but we couldn't see them yet.

CZ: Your books are filled with references to music. Can you tell us what you're listening to now--and if music today is also a pale version of its Sixties self?

JE: My musical tastes are pretty eclectic; I love Chopin (Ballade #1 is one of my favorite pieces of music ever), and I love Eminem for his wild wordsmithing, though I'll confess that my 9-year-old son introduced me to his work! My husband directs plays, which is great because he's always finding new interesting stuff for us to listen to. Lately he brought home Madeleine Peyroux, whose voice I find quite haunting. A group I discovered recently and like a lot is Kaki King. I rarely listen to music from the 1960's... it feels a little soft to my ear now. In terms of rock and roll, I'm often drawn to louder, rougher stuff; maybe that's my history as a punk rock wannabee showing itself! Honestly, though, I'm not one of those people who listens to music constantly. I really love silence. CZ: In each of your novels, a young girl is profoundly influenced by an older man, sometimes sexually, sometimes intellectually. Rather than ask you if that was your own experience, I will merely ask: is this something girls must seek to grow up?

JE: Huh, I hadn't noticed that through-line in my work until you pointed it out--gotta make sure I break that habit in my new book! As to your question, I don't think that all girls seek the influence of older men, but I think girls whose fathers are absent or recessed from their lives often do. And honestly, when I was growing up, fathers were generally pretty absent from their children's lives. We didn't see a lot of them. That may be something that has genuinely changed for the better in our culture: men are more present for their children now that more women are working. And it may be that as a result, young women are more likely to find an older male influence right inside their own homes, and not to seek it elsewhere. CZ: You've had the Midwestern childhood, the California adolescence, and the East coast adulthood. You have children now of your own. Your generation of mothers has been referred to as the helicopter moms, e.g. those who hover over their kids lives and interfere--all in the name of protecting them or nurturing them. Should we try to keep our kids safer than we were and can or should we really prevent them from experiencing all of the kinds of violence you depict in your novels? JE: That is a great question, and one I grapple with all the time. Like many people of my generation, I feel like I survived my adolescent mischief only by a miracle, and it seems too much to hope for that the same miracle would befall my children--therefore, I want to make sure they take fewer chances than I did. But can I really expect that? And do I really want it for them? I have a tendency to coddle my sons, because I want to keep them safe, but I also want them to be strong and independent and curious and bold, and I worry that my coddling is going to have exactly the opposite effect. I guess all I'm doing is repeating your question, because I truly don't know the answer, and wish I did. I feel like I was flailing around in the big world at too young an age, and yet I also know that I'm very tough, and that my flailing is partly what helped me to acquire toughness. I want to coddle my children into toughness, and that may not be possible! CZ: Do you teach? Can writers be taught to see our "shadow selves"? And after four novels and a collection of stories are you already at work on another?

JE: I teach intermittently, and while I enjoy it, I don't find that it's a calling for me. As to whether writers can be taught about "shadow selves," I'm not sure that I can even see them... that's a concept that emerged attached to one of my characters (in Look at Me) and I've puzzled over it ever since, wishing that I myself could acquire that vision--or at least the belief that I have it.

My next book will hopefully be the one I was trying to start writing when Goon Squad overtook me by force: a historical novel set in New York during and after World War II. I want to write about one of the women who built ships in the Brooklyn Navy Yard, and I've done a fair amount of research on this topic, interviewing women who worked there who are now in their eighties as part of an oral history project. The question will be how to approach a historical novel in a way that feels fresh and different. CZ: Finally, how do you know so much about freckles? You don't seem to have any!

JE: I do have freckles, but not in a physically defining way. I guess I have just enough to extrapolate from about what it would be like to have way too many!

I asked Egan for a photograph at the approximate age of some of her most endearing characters. She gave me one of herself at age 15. Of course she is beautiful, clearly engaged with the world.

And she does have freckles! 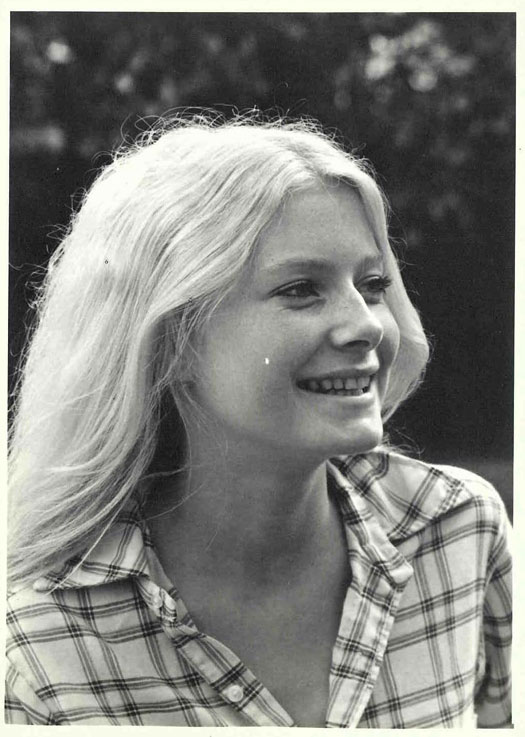 Catch up with Jennifer Egan this summer along with Stieg Larsson. Her trilogy is every bit as engaging.