Who here hasn’t thought about the pleasures of going off the grid -- the concept of removing oneself from the trappings of modern society, Thoreau-like, in favor of something a little simpler?

Wayne and Margy Lutz -- 65 and 63 respectively -- did more than just think about it when they pulled up stakes from their home in Los Angeles and moved to British Columbia in 2001. But it’s not so much their remote location that makes the Lutzs' off-the-grid life interesting. It’s their house: a 675-square-foot floating cabin on Powell Lake in Powell River, B.C.

“We both lived in the city all our life,” said Margy Lutz, a former educational administrator. “We just wanted something very different.”

The couple has a well-documented love for the outdoors and adventure: It’s actually how they met.

“[Wayne] was a good friend of my ex-husband” Lutz explained (the pair were already divorced when she met Wayne). “We all took an airplane camping trip together and after the trip, my ex-husband said, 'Hey, you two would be great together.' And so we were.”

The two married and made a life for themselves in Pomona, California. Wayne worked as a teacher, so they took their plane, Piper Arrow, on regular trips during summer vacations, camping and checking out potential retirement locations. After considering places like Tucson and Flagstaff, Arizona, fate brought the couple to what would become their future home in the summer of 2000.

“We landed in Powell River just to get gas for our airplane,” Lutz recalled. “It's a paper mill town -- you see large stacks with smoke and exhaust coming out of them and you say, ‘Well, this can't be a very nice place.’ We had to rent a car and drove all of our camping stuff down to a campground down on the water in town.”

The Lutzs appreciated the coastal town’s glacial beauty and the simple, off-the-grid way of life it offered. “We ended up spending both weeks [of our vacation] there,” Lutz said. “There was so much to do. So we decided that [it] might be an interesting place to retire.

“It was unique. It was off the grid, it was away from town. Sometimes you just know inside that something's right,” Lutz said. “We decided the one we ended up purchasing was perfect: it was newer, it was hand-built, it came with everything.” The couple worked with a real estate agent in the summer of 2001 to negotiate the deal, and for $35,000 the floating cabin was now their home.

“Our bill of sale was a sheet of lined paper on a legal pad handwritten by the owner that said, ‘You are now the owners of the float cabin.’ And that was it.”

Friends were confused by their choice to say the least. “Everybody thinks it’s a houseboat,” Lutz said, laughing. “In their mind they see something that’s got a motor and putts around, so we quit trying to explain it to people.”

Although there was steep learning curve, the Lutzs learned how to do basic things like use a chainsaw to cut wood, and do minor electric and mechanical work, with help from a neighbor named John, who sold them their home and has since become a good friend. The Lutzs used their floating cabin for short holidays until they both retired in 2005. Because the Canadian government has a six-month stay requirement, they became permanent residents in 2008 (they’re still U.S. citizens though and have a home in Bellingham, Washington).

Their 675-square-foot home definitely provides them with the off-the-grid simplicity they were looking for. There’s no television or Internet, and the couple uses a wood-burning stove for heat. Before their recent remodeling job the couple had “quite a climb” to reach an outhouse (now they have a 6’ x 10’ indoor bathroom with a composting toilet -- "It’s a wonderful device,” Lutz said).

But the Lutzs are far from homebodies; the day-to-day requirements and joys of off-the-grid life bring them outdoors regularly. “You gotta cut the wood, you gotta run the boat,” said Lutz as she ticked off a list. “If it's spring you want to go fishing, if it's nice weather you want to go hiking. So you're always busy doing something. Pretty much during the daylight hours there's always something drawing you outside to enjoy nature.” Their home can take up to eight hours to reach for outsiders, but they visit with people in their neighborhood of around 200 floating cabins regularly.

It’s the time to do “more simple things” that the Lutzs love most about their unique retirement, Lutz said. “I have a floating garden, I can grow some things, I can do some canning and preserving,” she said, “things I never had time for in the States because we were both working so much. Even on the weekends we were taking work home. Now we have time to do things that we love while still working.”

Their "work" is managing Powell River Books, a website which publishes ebooks -- “regional non-fiction accounts of Canadian life in the geographic area of Powell River” and Wayne’s science fiction novels, Lutz said. The couple had to start the Canadian company to overcome the legal issues that came with their new home: It enabled the non-Canadians to lease the rights to the water under the cabin, which is moored to a rock wall of a cliff with steel cables). The Lutzs also work with a tax accountant to deal with the complicated and expensive tax issues of being a U.S. citizen in a different country.

While Wayne is there most of the year, Lutz said she goes back to the States three weeks each month to act as primary caregiver of her ailing mother.

When asked if she could see herself spending the rest of her life on Powell River, Lutz pauses. “Probably not realistically,” she answered, sounding somewhat disappointed. “My mom’s 96, so hopefully I’ll have her genes. [But] as long as we can, we will.”

Corrections: A previous version of this article stated that Margy Lutz went back to the States for one week per month. She goes back for three weeks each month. It also stated that their floating cabin was located in the Yukon -- it is in British Columbia.

Fifty Retirement Off The Grid Slideexpand

Off The Grid: Wayne And Margy Lutz Find A Retirement Home In A Floating Cabin
The Lutzs&#039; Float Cabin 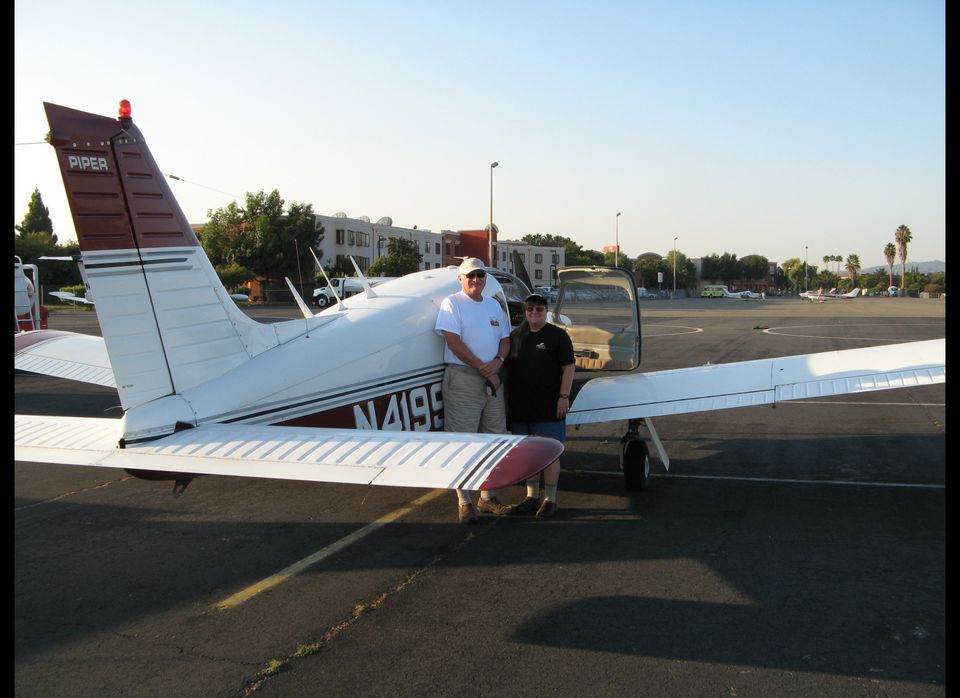 1 / 30
The Lutzs Before Moving To Powell Lake
"We used our [plane] Piper Arrow to travel each summer," Margy Lutz told <em>Huff/Post50</em>. "We've been as far as Cancún in Mexico to the Arctic Ocean on the Northwest Territories. After traveling to all of those wonderful places, we discovered Powell River and our float cabin on Powell Lake. We knew instantly it was the place we wanted to live for the rest of our lives. We still have our plane, but we travel a lot less these days. We love it so much up on the lake that it is hard to leave home."
Margaret Lutz