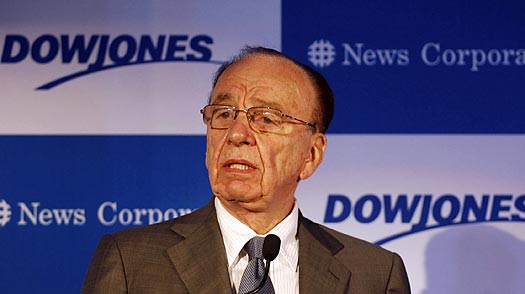 The Wall Street Journal should preach what it practices.

News Corporation, the newspaper's owner, talks the talk and walks the walk. Last March, News Corp Chairman Rupert Murdoch -- yes, Rupert Murdoch, who also owns Fox News Channel -- issued a memo announcing that his company had become carbon-neutral, meaning that it is removing as much carbon pollution from the atmosphere as it is emitting, achieving a zero carbon footprint. And he was justifiably proud of that achievement.

"We have become carbon-neutral across all of our global operations, and we are the first company of our kind to do so," Murdoch wrote. "We made a bold commitment in 2007 to embed the values of energy efficiency and environmental sustainability into all of our businesses -- for the benefit of our communities and our bottom line."

Improving the energy efficiency of the company's day-to-day operations had not only curbed emissions, Murdoch added, but also "saved millions of dollars."

Regardless, when it comes to climate change, the Wall Street Journal opinion pages talk trash and walk all over the facts -- with spikes.

Just last week, for example, the paper published a blatantly dishonest opinion piece, "No Need to Panic About Global Warming," which counseled candidates running for office this year to not worry about climate change. Why? Because, according to the authors, there has been no global warming for more than a decade.

As my colleague Peter Frumhoff, director of science and policy at the Union of Concerned Scientists, pointed out in "Dismal Science at the Wall Street Journal," "2011 was the 35th year in a row in which global temperatures were above the historic average and 2010 and 2005 were the warmest years on record. Over the past decade, record high temperatures outpaced record lows by more than two to one across the continental United States, a marked increase from previous decades."

The authors also insisted that carbon dioxide is not a pollutant. After all, plants thrive on it, humans exhale it, and it is a "key component of the biosphere's life cycle."

Well, yes, plants do "breathe" in carbon dioxide, but the fact is we are suffering from too much of a good thing. Emissions from burning fossil fuels and cutting down forests over the last century have created a heat-trapping "blanket" around the Earth, increasing the planet's average temperature.

And regardless of what the authors might believe, carbon dioxide is most certainly a pollutant. The Clean Air Act, which has been on the books for 40 years, wonkily defines an air pollutant as any "physical, chemical, biological (or) radioactive substance or matter [that] is emitted or otherwise enters the ambient air." Further, the law authorizes the Environmental Protection Agency to regulate any pollutant that it determines to "cause, or contribute to, air pollution which may reasonably be anticipated to endanger public health or welfare." The act specifically defines "welfare" to include threats to "weather" and "climate." (I could go on with my rebuttal, but Joe Romm, the editor of Climate Progress, saved me the trouble by doing a thorough job.)

The opinion piece's main conclusion? "It is likely that more [carbon dioxide] and the modest warming that may come with it will be an overall benefit to the planet." Major scientific institutions worldwide, including the American Association for the Advancement of Science, the American Meteorological Society and the U.S. National Academy of Sciences, would disagree. The greater incidence of extreme weather events around the world alone contradicts the authors' upbeat assessment.

So who wrote this poppycock? The Journal identified the 16 co-authors as scientists. As it turns out, not all of them are scientists. Only four have published climate papers in peer-reviewed journals, and only two have published relevant research over the past three decades. Half of the authors, meanwhile, have ties to the oil and gas industry or oil industry-funded "free market" think tanks. And the roster includes an aerospace engineer, an astronaut turned politician, an economist, a chemist and a medical doctor. Asking this group for its opinion on global warming is akin to asking a proctologist to opine on the latest developments in brain surgery. Two days ago, the Wall Street Journal published a letter by 38 bona fide climate scientists that essentially made the same point.

The Journal's offending January 27 opinion piece is hardly an isolated case. The paper has a history of publishing scientifically indefensible opinion pieces by its staff writers and outside contributors that attack climate scientists and downplay the seriousness of global warming. The bulk of these editorials and signed opinion pieces wouldn't pass muster in the paper's highly regarded news section, but opinion writers operate under a different set of rules. They're trying to persuade, and, of course, they have a right to express their views. At the same time, however, they don't have the right to make up the facts, and the Journal has the responsibility to vet whatever it publishes.

One could argue that the Journal is hardly alone, and that's true. Just off the top of my head, I know the Baltimore Sun, Boston Globe and Chicago Tribune recently published similarly noxious opinion pieces on this topic. And then there are the 300-plus papers that run syndicated columnist George Will, who consistently mangles the facts on climate. But unlike local and regional papers, the Journal has the largest national circulation and publishes perhaps the most influential opinion section in the country. It has shown over the years that it has the power to make or break government policy.

One also could argue that the Journal is just printing the kind of slash-and-burn, ideologically driven pieces that it has been running for decades -- well before Rupert Murdoch bought it -- and that's true, too. The paper's editorial page editor, Paul Gigot, is carrying on a tradition that long predated his ascension to the post in 2001. But the Bancroft family, who sold the paper to Murdoch in 2007, was not known for its willingness to take bold steps to address climate change. Murdoch, on the other hand, is taking bold steps, and News Corp's website trumpets that the company is "committed to minimizing its environmental impact, growing sustainably, and inspiring others to take action."

"Our long-term vision," the site says, "is to: grow our business without growing our carbon footprint; power our operations with clean electricity; minimize solid waste to landfill from our production operations; [and] engage our readers, viewers and customers on sustainability issues through partnerships and content of the highest caliber."

Did you catch that?! Inspire others to take action. Engage readers on sustainability issues through content of the highest character.

Somebody forgot to tell Paul Gigot.

Elliott Negin is the director of news and commentary at the Union of Concerned Scientists. He is a former journalist, and in the 1990s was the managing editor of American Journalism Review.