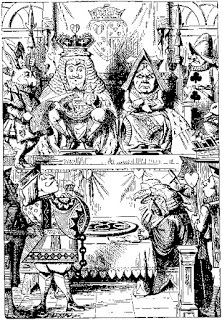 Have you ever emerged from a posh department store like say Bergdorf Goodman and wished that a brigade of ISIS terrorists would wipe the plastic smiles off the faces of both the supercilious customers and haughty sales staff? Of course one way to eradicate all forms of materialism including demeaning the worth of the person facing you and your own self worth is to cut off their heads. The Queen of Hearts' famous "Off With Their Heads!," once a cherished line from a childhood fable is now almost triggering language in this age of terrorism. One wonders if the NSA is monitoring video animations of the famed line. ISIS has no monopoly on the idea of radical craniotomy, but they have definitely cornered such a significant part of the market that one gives pause before indulging the kinds of angry fantasies of revenge that one might have enjoyed in the more innocent age in which Lewis Carroll originally wrote his fable. What's the average neurotic person with low self-esteem who feels socially ostracized, the kind of person who is constantly smarting from real or imagined insults, who constantly obsesses about unreturned emails and phone messages, going to do? In the old days, you simply exorcised the demons by imagining elaborate tortures for your torturers in which they were made to suffer for what they did to you. However now you stop, like someone waking up from a nightmare, before you fantasize guillotining the snotty maître d', since you don't want to be associated with the people who actually do these things. This poses two questions. Is colonialism a phylogenic form of snubbing and have generations of this behavior produced a culture of disenfranchised youths ready to act out the murderous fantasies the rest of the world only dreams of?

The King and Queen of Hearts (John Tenniel)