The internet: It's chock full of information. There is happiness and sadness. It can be a wonderful tool for keeping in touch, keeping in contact with family and friends. And it can be a source of anger and ire where arguments abound. The internet is not to be entered into lightly. A thick skin is a must. 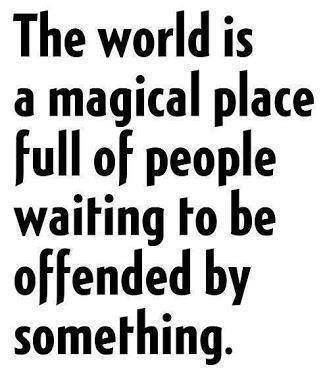 Wow, that's pretty deep stuff for a sarcastic humor blogger, isn't it? Yes, yes it is. And I AM a sarcastic blogger. I rant, I curse, some would say I'm offensive at times. But am I? Do I offend or is it that things I say are taken to heart by sensitive people whose feelings are easily hurt?

It has not now nor has it ever been my intention to hurt anyone's feelings. But sometimes it happens. Sometimes I may say something to offend. Sometimes it's funny, sometimes it's not. I have a tendency to speak first (okay, type first) and I don't actually THINK about whether what I say could be offensive to someone out there reading my stuff. It's part of my quick wit, I can't help it. But do I intend my words to be offensive? No, I don't. But are they? Yep, apparently, they are.

Take for example, a post made by my friends and fellow authors at the blog It's Really 10 Months. Before Easter, they posted something on their Facebook page about non-traditional Easter basket goodies. If you don't want the Easter Bunny to bring candy, what other items would you suggest. Me, in all my sarcastic wit, jokingly suggested: "Crack, guns and some clean needles." 27 people "liked" that comment. One simply posted "not funny" which I totally get. I'm not everyone's cup of cocoa. One person, however, took HUGE offense, replying: "That's not funny, snarkfest. is that what you give out? Im happy im not related to you." (HER typos, not mine. Everyone knows 'Snarkfest' is ALWAYS capitalized)

Seriously, people. It. Was. A. Joke. And for the record, I'm glad I'm not related to her either. Typos like that make me itchy. Did I set out to intentionally piss her off? Nope. Did she take offense? Yep. Was that my intention? Nope. Should I care that one person got a hair up her ass over a post I made? If I did, I'd then have to censor everything that came out of my mind. I don't want to have to do that.

I have another friend who wrote a post about how important it is for businesses to use correct grammar and punctuation. The post, "Trust me -- it DOES matter..." was a very well-written piece but contained the term "Grammar Nazi". We joked about whether or not some overly sensitive folks would be offended by the term Grammar Nazi. I'm half Jewish on my Dad's side. Should I take offense to that term? No, because in MY opinion, there's nothing offensive about it.

My point is, people are going to take offense to anything and everything. It's human nature. But do I set out to BE offensive? No. I don't GIVE offense. My friend Fiona, when discussing this issue, told me this: "Offense is taken, not given." And she's 1,000 percent correct.

People like Howard Stern, Lisa Lampanelli, Andrew Dice Clay and Daniel Tosh are not everyone's cup of tea. If you are offended by something that they say, then don't watch/listen/read. They speak, but not everyone is offended. Some are amused and entertained. But some don't enjoy dick jokes. Those people take offense. They TAKE OFFENSE. But does that mean that those comedians shouldn't say the things they say? NO, because we live in America, land of free speech. If you don't like something that you hear/see but it's not actually causing physical harm to anyone: change the channel. It's simple really.

I'm going to end with this: I've used the term "fucktard" a lot. It is NOT a term I use to mock those with Downs Syndrome. It has NOTHING to do with Downs Syndrome. It has everything to do with people being complete and total assholes on a lower than low scale. Some may find it offensive. I can't help that. But my friend who has a son with Downs Syndrome laughs her ass off when I use that term. I've used it to describe her pig scumbag of an ex-husband (actually, comparing her ex-husband to a pig is probably offensive to pigs. Sorry, pigs). So I'm using her, one of my best friends, as a gauge. If she, a mother of a son with Downs Syndrome, takes no offense to my using that term, that's good enough for me. If others take offense to the term, that's not on me. I'm not GIVING it, they are taking it.

If you have stuck with me through this post and will continue to enjoy my stuff, then I thank you. If you have read this blog post and have taken offense to any part of it, then I suggest you and I part ways, because if I censor myself to avoid anyone taking offense, then I am not being true to myself. I don't lie, it's not who I am.

If you have enjoyed my writing, but don't like this particular post, come back tomorrow, when I may have something completely unoffensive to say. That's the beauty of the internet.