All together now: AWWW!

On Monday, a Reddit user posted this image of a police officer reaching out to a tiny dog who appeared to be lost. The photograph was taken by MissEmKay, who told The Huffington Post she encountered the scene while driving.

"It was a really rainy yucky morning and I saw something in the street so I slowed way down," MissEmKay said. "The police officer pulled up, turned his lights on, stopped traffic and walked toward the little guy." 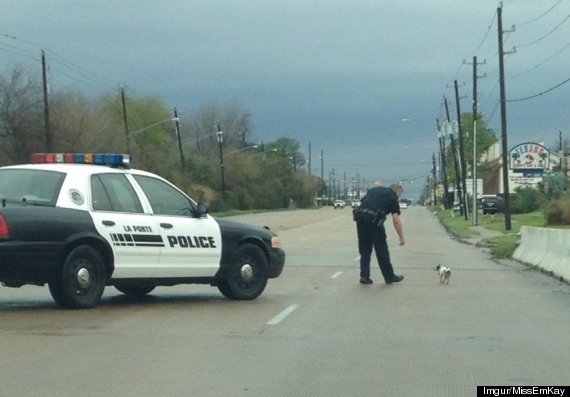 The dog was a little skittish, she said, but eventually let the officer scoop him up and put him in his back seat. Later, La Porte Police identified the cop as Officer Kyle Jones.

"No task is insignificant for Officer Jones," Sgt. John Krueger told The Huffington Post. "Moreover, the event was nothing but significant for the family."

A few hours after the rescue, police received a heartfelt email:

Just wanted to send a big thanks for the kindness shown to my "4 legged" son this morning!

As I raised my garage door to let our cat out this morning I left back door cracked and my little old guy ran out. When I discovered he was missing minutes later it had started raining. I drove up and down street with no luck seeing him. My son joined my search. He drove around in his car as I walked around neighborhood and park.

As I was walking on Farrington side of park my husband drove up and said that Animal Control had just brought him home. He said an officer had seen him in the middle of Spencer Hwy. and the officer had stopped traffic to help our little guy! Words cannot describe how grateful I am for this wonderful, caring officer and his kind deed!! It is a wonderful feeling to know we have people like him looking out for us... I kept reminding myself that he had his tag with his name, address & phone number. Then I would think of how small he is and worry all over again... After a bath and his arthritis medication he has been resting all day. Safe, warm, and home again. All because someone did care!

Again, our sincere thanks: Don and Diwanna Zapalac and Family

Officer Jones normally rides a motorcycle, but opted for a patrol car on Monday due to the rain, police said.