On May 21st I posted the story "Exclusive: New Video of Unexplained Aerial Phenomenon From Chile." It described a sighting of three consecutive formations made by five spinning lights: a straight line, a triangle, and a circle. Three reliable witnesses witnessed the spectacle at an Air Force Academy; two captured the triangular formation on their cell phones. The lights appeared so close that the witnesses thought whatever it was might land. A sergeant with more than 20 years experience in the Air Force also described seeing a submarine shaped "ship" with lighted windows.

The case was thoroughly investigated by the official UFO agency in Chile (CEFAA), along with its volunteer committee of scientists, Air Force technicians, police, psychologists and other specialists. They ruled out every conceivable explanation. 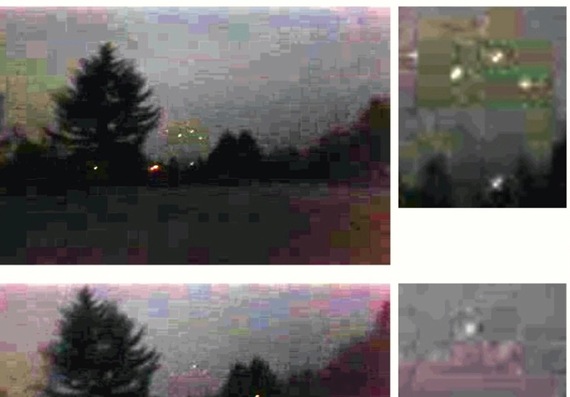 A still from the video, analyzed by a government laboratory (photo CEFAA)

Since the "submarine UFO" seen by the sergeant was not observed by the other two witnesses, the committee from Chile formally concluded that the case involved an "anomalous light phenomenon" and left it at that. Therefore, in my blog post yesterday, I felt it was my responsibility to write conservatively and honor this conclusion.

However, this prevented wider exposure for the story. So I am writing this follow-up to make it more accessible, and to urge people to read about the case, watch the video, and decide for themselves. Does this case involve any UFOs? I think, in terms of how most of us understand the meaning of the word "UFO" - something unexplained in the sky which is not necessarily flying or an object - the answer is obvious.

As I see it, my responsibility as a journalist trusted with exclusive access to cases from Chile is to respect the process of the CEFAA and to report accurately on the carefully thought-out conclusions from its committee. I want to thank my editors at the Huffington Post for their understanding of my cautiousness when reporting on cases from government agencies or issues involving government policy.

Please read about this case here! It is more dramatic than the headline reveals. And the work of the Chilean government on UFOs is the most productive official effort in the world. We can all benefit from understanding how the CEFAA staff and committees do their job. And that information needs to reach audiences far and wide, so other countries can follow their example.