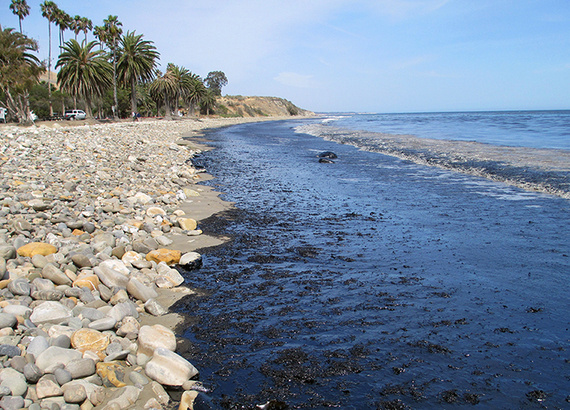 This week's criminal indictment of an oil company for its involvement in the Refugio oil spill in California last year comes as no surprise. After all, Plains All-American Pipelines' corroded pipes allowed more than 140,000 gallons of oil to spew into the coastal environment, killing birds, sea lions, and other wildlife.

But there's a larger crime at work here - one that may not seem as obvious - that sets the stage for the oil industry's spills, the pollution of our beaches and coastal communities, and the worsening of the climate crisis. By allowing companies to drill for offshore oil, and accepting that these kinds of incidents will happen without a doubt, the U.S. government is setting the stage for one disaster after the next. And it's been going on so long, we've stopped taking notice on most days.

Did you hear about how one of Shell's offshore pipelines spewed nearly 90,000 gallons of oil in the Gulf of Mexico last week? It created a 13-mile oil slick on the Gulf. No? There were short news stories about it, but not enough to penetrate our national consciousness enough to inform federal decisions about whether to expand or scale back the country's extensive offshore oil infrastructure.

Plains' pipelines along Santa Barbara's coastline serve seven offshore oil platforms that have been dormant since the Refugio spill almost a year ago. They should stay that way - forever. Federal data shows that pipeline failures and spills become exponentially more likely as they approach 40 years old, and most of Southern California's coastal oil infrastructure is that age or older, built from the 1960s to early '80s.

Continuing to operate oil pipelines that are likely to burst is criminally negligent. So is waiting hours to notify the authorities after a spill happens. California Attorney General Kamala Harris, upon announcing the Plains indictment on May 17, said in a public statement, "Crimes against our environment must be met with swift action and accountability."

When will we treat Big Oil's routine crimes against our climate and coastal communities with the same firm resolve? People around the world are demanding "swift action and accountability" from President Obama to meet his carbon reduction pledges before he leaves office, not the expansion of offshore drilling in the Gulf and the Arctic that his administration proposed in its current five-year energy plan.

Coastal oil spills violate laws protecting wildlife and water quality, and are not the "unfortunate accident" that Plains called its Refugio spill this week. You just can't call a statistical inevitability an "accident" - it's the inherent cost of continuing to extract oil from the ocean floor. In fact, when the pipeline was constructed, the federal government acknowledged that the probability of an oil spill increased to 100 percent once the pipeline reached 40 years of age, and that there could be significant adverse impacts from such a spill.

After enduring spill after devastating spill - from the Exxon Valdez to BP's Deepwater Horizon to Plains' Refugio Oil Spill - we need to stop coddling these crimes against our environment, particularly now that climate change has reached crisis proportions. It's time to stop issuing new offshore leases, decommission decades-old coastal oil infrastructure, and move boldly into a clean energy future.