Here, in Part 2, Cape Wind Communications Director Mark Rodgers reflects on the leadership required to move the project from drawing board to construction. He explains how the un-calculated or "external" costs of polluting sources of energy have inspired communities to support renewable sources of power. He also points to the intersection of Massachusetts's burgeoning clean energy economy with its embrace of windmill power over 300 years ago.

Clark: In the beginning of 2015, Cape Wind will begin construction and then in 2016, you'll begin providing large blocks of emissions-free power to the residents of southeastern, Massachusetts. You've overcome a lot of obstacles to get to this point; did a favorable political environment in Massachusetts help?

Rodgers: "The leadership and support of Governor Deval Patrick has been key, largely because he has made renewable energy projects and improved energy efficiency cornerstones of his administration. Part of the Governor's commitment to Cape Wind results from the fact Massachusetts exports around $20 billion of its wealth annually to import the coal, natural gas and oil we need to power our economy. He knows that as we generate and own more of our own power, Massachusetts will continue to become more competitive and less vulnerable to the fluctuating prices and availability of fossil fuels." 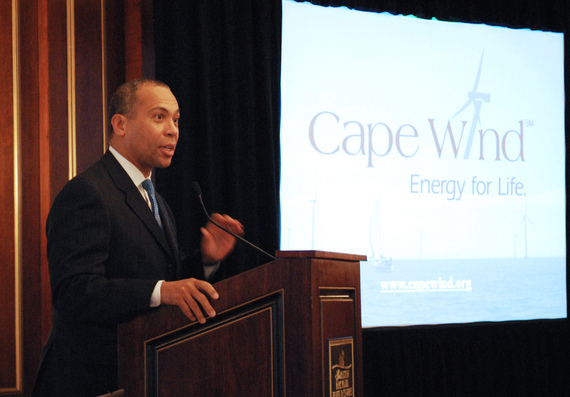 Clark: The market hasn't yet factored in either the finite nature of fossil fuels or their external costs to society.

Rodgers: "It's true. The traditional energy market [coal, natural gas and oil] continues to have distortions in it. The external costs of excavating, transporting and burning fossil fuels are not captured in the power price that consumers pay. If these costs were included, we'd be paying much higher rates for all fossil fuel based energy products and wind and solar energy would have reached and even surpassed grid parity long ago."

Clark: Can you give readers an example or two?

Rodgers: "Imagine the costs associated with degraded environments, like the mountaintop coal removal areas of Appalachia. The problem is that the toll of black lung disease and emergency room visits due to increased asthma attacks are paid for through our medical costs, not our fuel costs, as they should be. In other words, the true price of coal is much higher than what the market reflects.

"We also pay the external costs for oil in a higher defense budget because of the obligation we feel to keep energy supply lines open through dangerous parts of the world. And, perhaps the greatest price we'll pay will be in all of the expenses we'll incur in adapting to climate change. These are all the potentially vast costs that we avoid when we invest money in clean renewable energy. We'll never run out of wind or sunshine."

Clark: How soon do you expect to see the fossil fuel industry invest real money in clean energy solutions?

Rodgers: "Well, for example, take Exxon Mobil and the Koch Brothers. It may take a while, but eventually, someday, someone in their board rooms is going to see that the path they're on isn't even in their own best interest. Coal plants are closing and communities are advocating for cleaner air and water."

Clark: James West, Contributing Producer for Mother Jones magazine, reported this month "that China is now moving forward with plans for a massive, nationwide cap-and-trade program intended to help combat global warming." How might this inspire fossil fuel companies to move faster and become part of the solution rather than the problem? 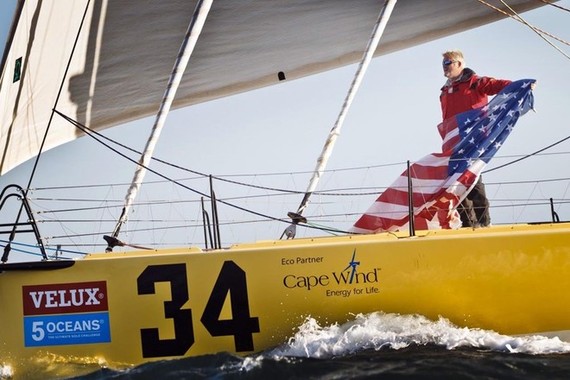 Rodgers: "Well, China's move is all the more reason to recognize that by accelerating our efforts to build an economy that is based on fuels that are not only clean and indigenous, but also inexhaustible, we can mitigate the worst effects of climate change and drive great innovation here and around the world. After all, successful enterprises need access to clean water supplies and environments that people want to live in. Clean energy helps to preserve the resources that all businesses need to thrive."

Clark: What are the chances that the next fourteen years will be a time that America leads the world in clean energy innovation?

Rodgers: "It's really not a competition, but rather an opportunity. Actions that we and other countries take to lower greenhouse gas emissions do not guarantee action on the part of other countries, but inaction on our part can be used to justify inaction elsewhere. So, the degree to which India and China see us taking steps to move forward on clean energy will send an important message on how global norms are evolving. I think that working together, countries around the world can make major strides toward achieving the environmental goals we all need to meet."

Rodgers: "By necessity, China is changing their energy mix to assuage their population. Their people are fed up with breathing dirty air. They're fed up with the negative health effects. The government of China recognizes this and it's probably motivating their embrace of clean energy even more than climate change is at this stage." 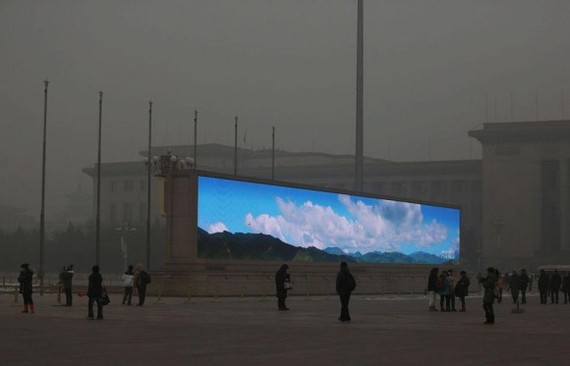 Clark: What do you think will be some of the most important dividends for Cape Codders when Cape Wind begins construction next year?

Rodgers: "The Cape and the Islands were created at the end of the last ice age by a retreating glacier. There's not a lot in the way of bedrock here. It's pretty sandy; it's pretty low-lying. So, it's very vulnerable to the effects of erosion, rising sea levels and more frequent, severe storms. So one major benefit of Cape Wind is that Cape Cod will be less reliant on the fossil fuels that are warming the planet and thus threatening our way of life."

Clark: What are the natural resources -- apart from brisk offshore winds -- that Cape residents value the most.

Rodgers: "The things that are treasured here the most -- everything from our precious beaches and shorelines to the fish that we eat, the cranberries we grow and all the many other things that are integral to the identity of this beautiful place -- are all under threat.

"If you think about it, Cape Cod got its name because the first settlers only had to stick a bucket in the water and they had dinner. Yet, there's a serious question now about whether the warming waters of Cape Cod will even be habitable for cod anymore or whether fishing boats will have to travel to northern Maine to reach their new range." 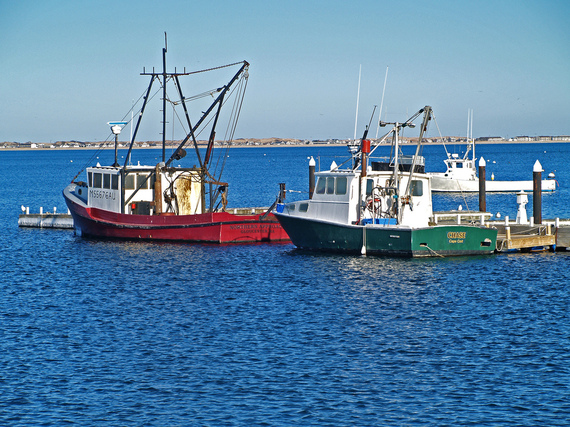 "Cranberry bogs, another major industry very much associated with Cape Cod, is also climate dependent. It's successful here because we have the right mix of sand and clay in our soil, but cranberry bogs require an environment that isn't too hot." 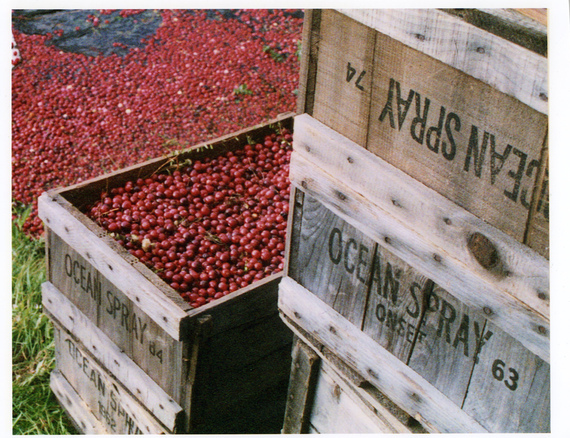 Clark: So wind power will once again become part of the culture and economy of Cape Cod?

Rodgers: "It already is. You still see that windmill insignia if you look for it. You see it on town welcome signs. You see it on storefronts. It's ubiquitous. Most every town on Cape Cod has a street called Wind Mill Point. Harnessing the wind, as our nation's early settlers did, is an opportunity to move forward in a much more sustainable way and to prosper from the economic growth it will deliver.

"Cape Wind may be the first offshore wind farm in America, but many more will follow. Is America reinventing itself? Maybe. And that's not a bad thing." 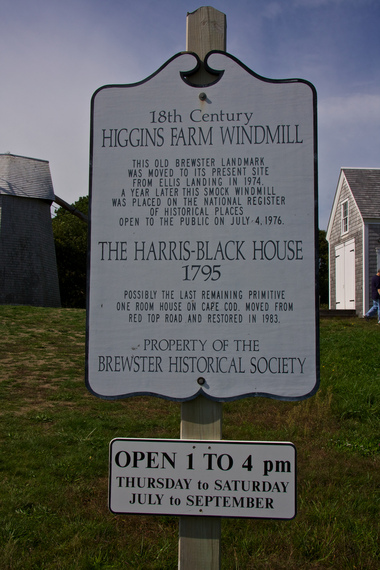 Clark: Years back I recall that there were complaints that the windmills would be visible from the shore.

Rodgers: Yes, but quite frankly, it's great that they're going to be visible. I think there will be a lot of pride associated with the fact that most of the electricity for Cape Cod, Martha's Vineyard and Nantucket will be coming from these offshore winds, that by the way, tend to be blowing very hard when the electric grid is under greatest stress. They're a reminder that our energy solutions are literally within view." 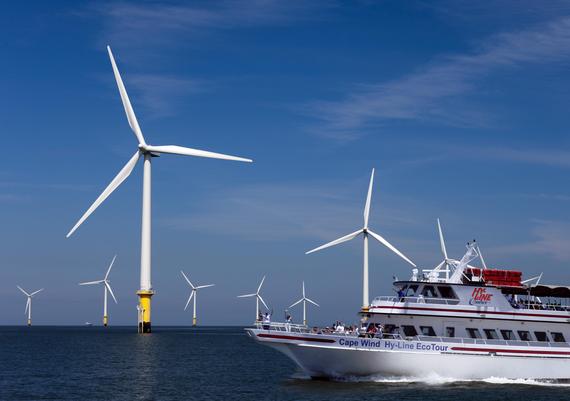 Clark: You mentioned that the wind blows the hardest when demand for electricity is the highest.

Rodgers: "Yes, the hot summer heat wave conditions, when electricity demand for air conditioning is peaking in New England, create strong offshore winds. This is because the landmass over Cape Cod heats up to over 90 degrees, while the air over the water is much cooler. As the warmer air moves out over the ocean, that differentiating air pressure is a wind-producing event; it's the 'sea breeze'."

Clark: What about in the winter months?

Rodgers: "The pipeline capacity of natural gas coming into New England is limited and as most of the gas is used for heating during winter months, there's not as much left over for electricity generation. So it's a problem that keeps electricity planners up at night. Could you imagine a worse time for a rolling blackout than during a subzero weather snap? But it's a problem that we can help mitigate by increasing our supply of wind power. Remember during the coldest days of the year, the meteorologist is always talking about the "wind chill effect." Winter happens to be the Cape's windiest season. With this in mind, I very much look forward to shifting from what has been a fourteen year-long development effort to the construction and operation phase of this project."

Rodgers: "I think that people are really going to be surprised at how quickly this is going to happen. We recently signed a lease with the Massachusetts Clean Energy Center to use the new marine commerce terminal in New Bedford [MA] for our staging and assembly port. Our goal is to complete project finance by the end of this year, install the foundations next year and then, in 2016, many of the turbines will be hoisted into position. By the end of 2016, we'll be able to do a partial commissioning of Cape Wind. We'll then follow with a full commission in 2017. So it's been a very, very long journey, but the pace is about to pick up dramatically."