"The Cape and the Islands once had a thousand working windmills. The earliest were built in the 1600s and by the 1800s wind energy was powering the lives of early settlers. Imagine a landscape where windmills, not fossil fuel power plants, produced much of the nation's salt, which was a critically important commodity to preserve the fish and meat that the economy relied upon." 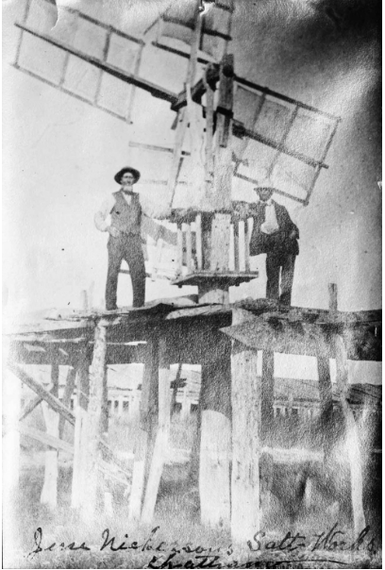 Here, Part 3 explores how Cape Wind is catalyzing a new American energy industry that will generate clean electrical power, the jobs that support it, and the commercial businesses that organically grow around both. As New Bedford's city planners and businesses busily prepare to stage the assembly, construction, and installation of Cape Wind's 2015 "steel-in-the-water" deployment, public acceptance of renewable energy's economic significance has increased.

Cape Wind President Jim Gordon's vision for New Bedford's future was a welcome hit of adrenaline for all those in attendance at a Boston press conference in September:

"Cape Wind hopes to be the first of many offshore wind projects that will operate out of New Bedford's harbor, creating economic development and once again making New Bedford an energy capital of the world."

The region surrounding New Bedford will benefit too. Having relied largely on coal and nuclear power for electricity generation, scientific reports have linked both to the disproportionally higher rates of cancer found in southeastern, MA, where residents support clean energy initiatives. 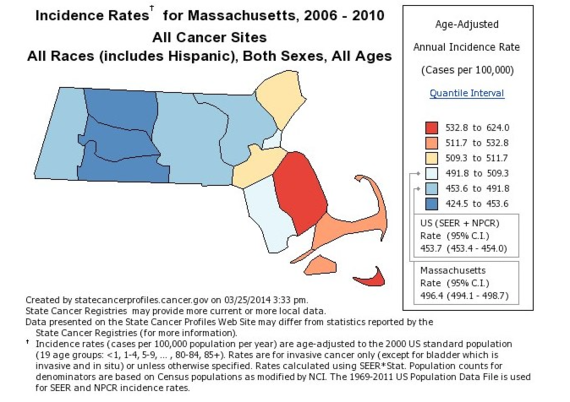 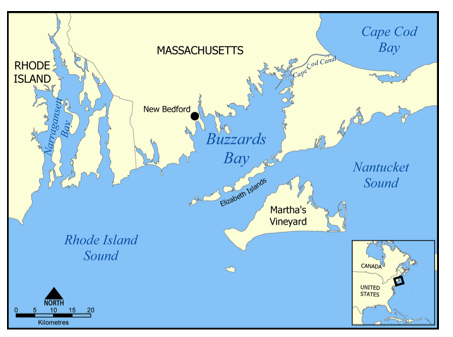 Brayton Point made the news this year when criminal charges against Jay O'Hara and Ken Ward were dismissed by Bristol County's District Attorney. O'Hara and Ward used a lobster boat named the "Henry David T." to block a shipment of coal. At an early September press conference, District Attorney Sam Sutter announced that his office's decision was influenced by "the grave risk that climate change poses to society" and "the absence of broadly mandated policies to swiftly transition communities to sustainable power sources." Though Brayton Point is scheduled to close in 2017, and one other smaller Somerset coal plant has already been decommissioned, it's widely believed that the burning of coal at Brayton Point continues to place the densely populated communities across southeastern MA at risk.

In a phone interview, D. A. Sutter punctuated his position:

"If we do not act to quickly forge the transition of our energy sector towards sustainability, I'm convinced that the consequences for us will be dire. Being the Bay State, our hundreds of miles of navigable shoreline provide the perfect opportunity to be national leaders in the production and distribution of offshore wind energy and I plan to continue to be a leader on this issue." 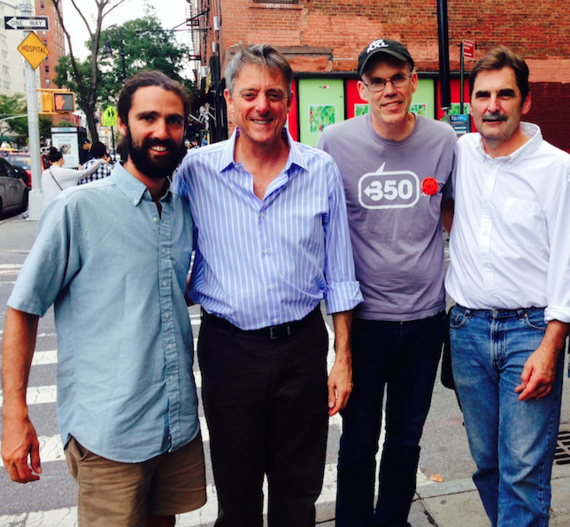 "Though one offshore wind farm is not going to by itself reverse a global climate phenomenon or eliminate air pollution, it is a step in the right direction and its location in Cape Cod will symbolize American ingenuity responding to a great challenge."

D.A. Sutter added that he has also called for the closure of the Pilgrim Nuclear Power station in Plymouth, MA, which is located 20 miles northeast of New Bedford. Pilgrim has been the subject of much public consternation as it was built with the same technology as Japan's Fukushima reactor. Concerns over radiation leakage, contaminated shellfish beds, improper ventilation, mishandled nuclear fuel rods and myriad, often unresolved automatic shutdowns of the plant, leave many to wonder how long an aging nuclear plant should be allowed to operate. After touring the facility personally last year, U.S. Nuclear Power Commission Chairman Allison Macfarlane downgraded the plant's performance rating. 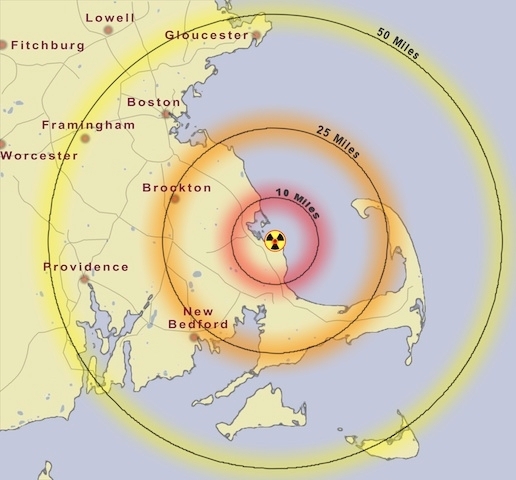 With the risks of the Pilgrim station unresolved, with no new MA coal plants scheduled for development, and with public support for clean energy increasing across southeastern MA, reason dictates that sustainable new sources of electricity will not only remain in high demand, but will also accelerate the economic renaissance already emerging in New Bedford.

New Bedford's Mayor Jon Mitchell isn't shy about the transformation underway in his city since investments in clean power and energy efficiency were launched. In a telephone interview last week, Mayor Mitchell reported that roughly three-quarters of the electricity required by New Bedford's government buildings is already being produced by a combination of land-based wind and solar power projects:

"This is one way we have begun to successfully rebuild our economic base and rebrand New Bedford as a progressive and prosperous metropolitan center."

A combination of political will, thoughtful financial modeling, community partnerships, and real-world research explain much of New Bedford's recent turn-around. Mayor Mitchell reflected on the delegation he led in 2013 to identify how European wind power was recasting formerly vital industrial communities into coastal champions of the modern wind power industry:

"Bremerhaven, a leading offshore wind power port in Germany, was resurrected when it retrofitted its harbor to serve Germany's ambitious offshore wind power goals. The city now boasts a bustling energy bonanza consisting of 30,000 new jobs, a landmark hotel, and world-class museums. This economic momentum, powered by the offshore wind industry, is driving Germany closer to its 2025 goal of producing one-quarter of its electricity with offshore wind." 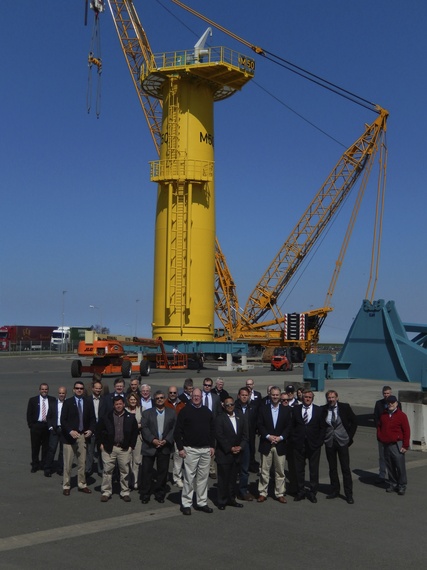 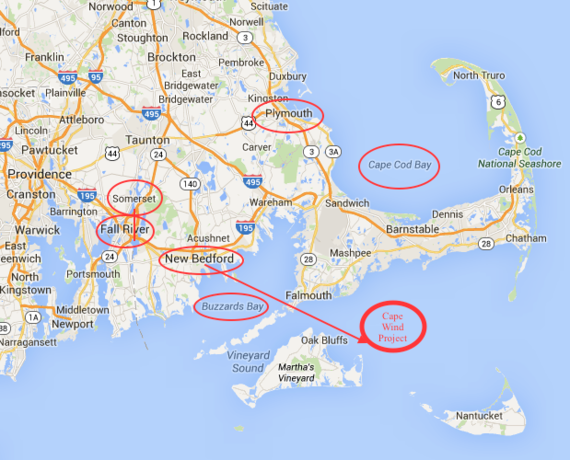 BOEM recently approved an undersea transmission line that will, according to Herman K. Trabish's story in Utility Dive, deliver emissions-free electricity from a smaller 30-megawatt offshore wind project to mainland Rhode Island. And, just last week, the U.S. Department of the Interior issued the Final Sale Notice for a larger, already-approved offshore wind development zone. The area will enable Massachusetts to further expand its offshore wind resources and will drive additional clean energy investment and job creation throughout the region. It would appear that Massachusetts Governor Deval Patrick's early goal to make the Commonwealth "the hub of the offshore wind industry emerging along the east coast of the United States" is taking shape. 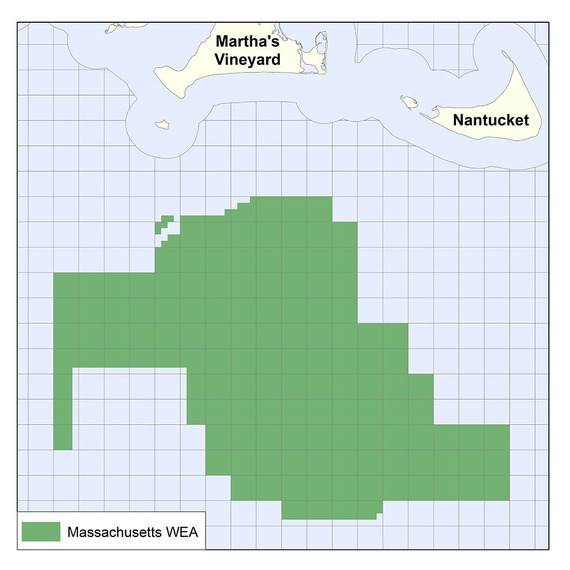 The 742,000-acre "Wind Energy Area" is located 12 miles off the MA coast and will be auctioned as four separate offshore leases. According to the BOEM site, the proposed area is "the largest in federal waters and will nearly double the federal offshore acreage available for commercial-scale wind energy projects." The bid sale for these four tracts will be auctioned on January 29, 2015.

All this is welcome news for the city of New Bedford, which was made famous during the mid-18th to mid-19th centuries for lighting the world with whale oil and which later endured the loss of a once vibrant textile industry to outsourcing. And though New Bedford's harbor remains the most productive seaport in the nation, overfishing of the world's oceans has led to a global decline of the industry and the jobs that accompany it.

"We're located near one of the windiest places on the planet and the inexhaustible energy of this renewable resource will augment our supply of electricity and launch new jobs, as aging industries like coal and nuclear power move offline."

Mayor Mitchell's Chief of Staff Neil Mello added that manufacturing of even the largest windmill components will inevitably emerge in MA, as the U.S. industry scales over time:

"The captains of America's offshore wind industry will quickly come to rely on New Bedford to assemble, deliver, erect and service their installations. And with 8,000 parts comprising a modern wind turbine, an entirely new American-based supply chain is expected to grow up here along the coast to support and strengthen our increasingly dynamic and diversified economy."

Institutional investment in renewable energy has grown in recent years, which is why Goldman Sachs committed $40 billion to clean energy in 2012. RenewEconomy Editor Giles Parkinson reported that Goldman Sachs believes "renewables will play a key role in U.S. GDP." In this video, Stuart Bernstein explains Goldman Sachs's view on the expanding clean energy sector and how the U.S. will likely transition to an energy grid predominantly powered by clean energy: 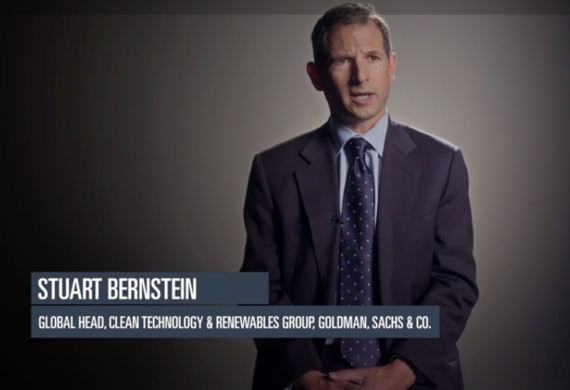 "The most important next step is to design long-term policies that companies, consumers, and investors can rely on. So, we need to find a clean transition from coal to natural gas to renewable base loads."

And that is exactly what Jim Gordon has achieved, according to New Bedford Wind Energy Center Managing Director Matthew Morrissey, who shared his perspective by phone:

"Having taken the initial risk and won the many legal challenges posed by opposing energy interests, Cape Wind has paved the way for a new American energy industry to deliver sustainable manufacturing jobs to communities like New Bedford. Our city is poised and primed to ensure that ocean wind energy becomes a vital commodity once again."

Gordon and Rodgers were honored to receive Mass Energy's 2012 Award for "Cape Wind's commitment to Massachusetts's clean energy future, trailblazing the path for the American offshore wind power industry, and for aligning its vision with the energy goals of Governor Patrick's administration." 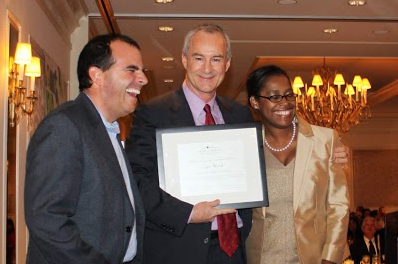 "Over fourteen years, Jim and his team have shown how policy makers, investors, regulators, and practitioners can come together and move a landmark project to its final stages of implementation. On so many levels, New Bedford has benefitted from the forward-thinking, persevering culture of Cape Wind. And this is just the beginning."

Author Note: Stacy Clark is grateful to information provided by journalist Ariel Wittenberg, who documented Cape Wind's evolution over many years, while reporting for the New Bedford Standard Times.