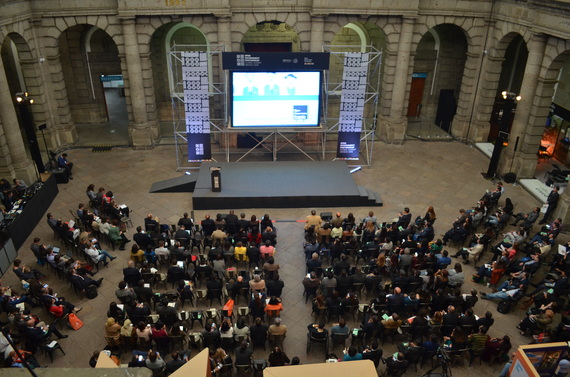 The Open Government Partnership (OGP) is a bold initiative between governments and civil society organizations that seeks to make governments more open, accountable and responsive to citizens. In less than five years, 69 governments have joined. The OGP is where new global norms for government transparency are now being set.

This year the OGP is co-chaired by the Government of South Africa and emboldened by the African Union's declaration of 2016 as the African Year of Human Rights. It is time for the OGP to develop a truly African agenda, one that is led by African citizens and African countries and one that opens the space for the poorest and most vulnerable people to claim their rights.

This week African leaders can seize the opportunity to do this at the OGP Regional Meeting in Cape Town. More than 500 people from across the continent - governments and civil society - will gather to discuss how open government, and a more transparent and accountable approach to governance, can support sustainable development in Africa.

This important meeting could not be more timely. The huge ambition that realized the Sustainable Development Goals (SDGs) needs to be bolstered and channelled quickly into implementing them. Good open governance, ultimately, is the launch-pad that will transform the 2030 Agenda from aspiration to achievement. Rule of law, access to justice, and financial transparency happen by design, not accident.

At the heart of the issue is access to power: people who are denied it are denied the chance to make decisions about their lives. With power, they can gain more control over their own lives and can more surely begin to escape from poverty. Because of this Oxfam was proud to form an alliance with the OGP and endorse the OGP's declaration on the SDG's with other civil society organizations and fifty governments.

OGP's mission has never been more important. Today, the space for citizens to speak out is increasingly under threat. In 2015, CIVICUS reported that freedoms of expression, association and peaceful assembly were violated to a significant degree in 96 countries - 37 of them on the African continent.

Protecting space for civil society and citizenry is particularly critical in a world marked by rising political and economic inequality. In sub-Saharan Africa, fewer than a dozen people now have the same wealth as the poorest 50 percent. Ordinary people must be able to meaningfully hold their governments and the private sector to account.

Already there are examples of how African nations are committing to open up their governments as part of their OGP National Commitments. The Liberian government is seeking creatively to ensure that vital information reaches every part of the country no matter the infrastructure challenges - transmitting information about budgets, open government, and other issues through text messages, town criers, radio, interactive murals, and citizen journalism.

Tanzania is enhancing transparency on the use of land: making data on land ownership, use and demarcations for large-scale agricultural investment accessible online for public use. This could help strengthen local communities' rightful involvement in decisions that could affect them, and lessen the chances of land-grabbing and eviction. Last year it published all its budget expenditures and tax exemptions in its health, education and water sectors. This allowed people to scrutinize decisions around public finances and hold their government accountable.

These kinds of developments are positive, but only a start in meeting the scale of challenge before us. The recent release of the Panama Papers shone a light into the murkiness of global money flows. Tax havens are hurting Africa: almost a third (30%) of rich Africans' wealth - $500bn - is held offshore, costing African countries an estimated $14bn a year in lost tax revenues. The ODI points out that relative to national income, sub-Saharan Africa pays the highest price in the world for the governance failures and lack of transparency associated with offshore finance.

This situation has spiralled out of control, enabled by a system mired in secrecy. The OGP is well positioned to help civil society push for new global standards in the fight for transparency, and the fight against corruption.

Next week (May 12) the British Prime Minister, David Cameron, is hosting an Anti-Corruption Summit in London. For Oxfam, a crackdown on tax-dodging must be central to the summit's agenda. Together with my fellow OGP Ambassador Mo Ibrahim, and others, I have called for delegates at the Summit to agree to eight critical steps. They are all reflected in OGP National Action Plans, and I encourage African OGP countries to commit to addressing and building on them all, and to be as ambitious as they can. The OGP Regional Meeting can help us to ensure we turn these commitments into actionable plans with time-bound benchmarks, with civil society engagement and oversight.

The Regional Meeting must also signal a turning point where governments across the continent recognize fully the contribution that civil society makes to Africa's future development - and collectively set out to protect it. The Regional Meeting can galvanize far more African countries to make the leap from informal dialogue with the OGP to formal participation - currently only nine African countries are signed up.

And finally, getting the design right for civil society engagement is crucial. The OGP can help steer governments to avoid a "one size fits all" approach. Rather than just providing a seat at the table for under-represented groups, governments need to consciously include groups that are unable to turn up to public meetings, or that lack the technology to consult or the skills to interpret government data. Governments and civil society must step up to ensure inclusivity in the commissioning, design, delivery, and assessment of vital public services.

Getting governments to open up in fundamentally new ways is not easy; but North and South, through the OGP it is happening and it is needed. Let us now - with government and civil society at the fore - build and shape an African agenda on open government reform.