Robin Williams turned me into a teacher. Turned me onto poetry. Made me want to believe in the power of words and music.

Granted, he didn't write the screenplay for Dead Poets Society, but I doubt it could have been told as well with someone else at the helm. And it doesn't really make a difference. Because for me, he will always be the Captain.

I was in high school at the time and my experience with education had been less than stellar. I had teachers that destroyed subjects for me. Teachers that didn't care. I loved writing and my principal wouldn't let me in the creative writing class. Loved English but I wasn't allowed to take the AP class. Needless to say, I eagerly awaited the day that I could walk away from education forever and settle down into some profession that required minimal intellectual aggravation.

And then there was Dead Poets Society.

I wanted to be in that school. I was so starved for inspiration, for someone to believe in me, that I would pretend I was one of the boys in the class. I even looked for glasses that matched the ones worn by Robert Sean Leonard when he reads from that God-awful guide to poetry at the beginning of the film.

After graduation, my friends and I started our own Dead Poets Society. I was in Israel for the year and would escape to random caves and archeological digs in the middle of the night with a book of poetry, some candles, and my friends. We climbed the Old City walls at 3AM and stormed the ramparts when everyone else was asleep. One night, we met some strangers and took them with us to our abandoned caves and asked them to read poetry with us. I still have our poetry book, purchased in a used book shop that year: 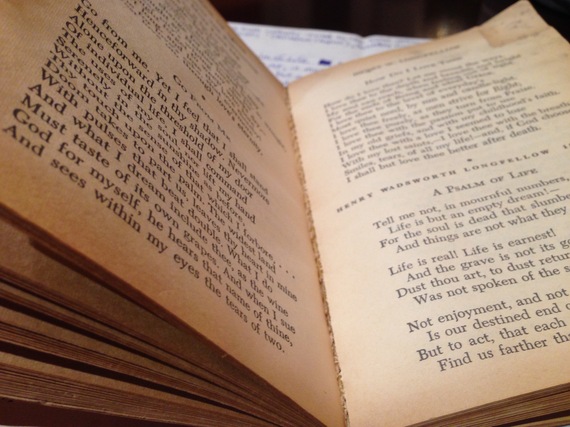 It was remarkable that we even survived. Remarkable that we weren't shot, or entombed, or kidnapped. We were crazy Americans in a foreign country, but we were "sucking the marrow out of life" and enjoying every minute. When we returned to the states, no one believed us. The stories seemed unreal. Too perfect. And they were. At least for the people who kept their fictions on pages or screens. For us, well, those were the realities we wanted and so we abandoned safety and rules and made the movie our life. We were Mr. Keating's students.

I am keenly aware of the impact a character can have on a person's life because my life has always been influenced by books, TV, and movies. When I heard that Robin Williams died, it knocked the wind out of me. For someone whose daily choices in my classroom were so influenced by a character he played, I felt like I had lost a mentor. I had lost my captain.

It's too late for me to write to him and let him know what he did for me. Too late to tell him that he was the one that could always make me laugh. Too late to tell him that his talents spanned generations, that my kids think of him when they think of Peter Pan. That he will always be the nanny everyone wants, the doctor everyone looks for, the DJ we want to hear. That he was the consummate teacher and my captain. Always.

I will miss him and all the characters that will no longer live through him.

And I'm so sorry I waited to thank him.

Exult O shores, and ring O bells!
But I with mournful tread,
Walk the deck my Captain lies,
Fallen cold and dead.