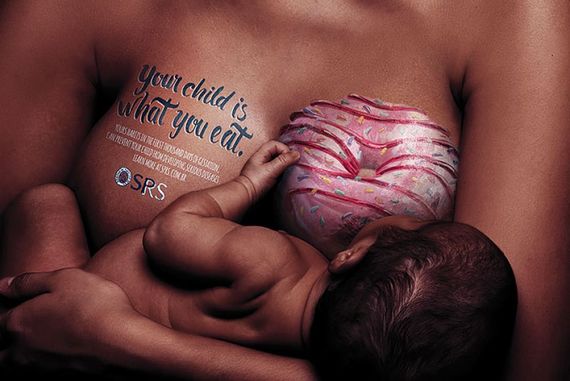 In today's THANKS FOR THE FOOD-SHAMING and oh BTW YOU DON'T UNDERSTAND PHYSIOLOGY news: Tits and donuts. Sounds pretty good right? WRONG. A public health organization group in Brazil thinks it's a real good idea to tell women that whatever they eat, their infant also eats (that website is in Portuguese, so you'll just have to take my word for it.) That's right, eat a donut, make a donut baby.

This basically means all my kids are made of coffee and Oreos.

There are SO many problems with this. Just, SO MANY. All the shaming; class, food, mom, body. Just all of it.

A. Brazil has literally the highest C-section rate in the world. Eighty to 90 percent of women undergo an elective C-section. Why, you ask? Because they don't want their vaginas RUINED BY A HUMAN BEING COMING OUT OF IT. (P.S., the vagina is actually made for babies to come out of it.) Who told the women of Brazil their vaginas shouldn't have babies coming out of them?

Right off the bat, I'm not into Brazil as a health information authority.

B. This is actually not how breastmilk works. No. Sorry to disappoint, there is no Vitamix in your breast tissue on standby to puree your Big Mac and large fry (yum, fries). Which is a bummer because imagine if your boobs actually did make hamburgers. That's right. HAMBURGER TITS.

This is a country that actually has a pageant called Bum Bum which pits women against each other for the Best Ass award. This is a country that TRAINS their Miss Universe contestants to give them a leg, er ass, up on the rest of the women of the entire world (and also outer space?). This "training" include plastic surgery. And no I am not making that up. So hey Brazil, way to terrify your women into thinking that their nutritional choices may actually make their babies either fat or unhealthy or diseased or D. all of the adove. And everyone knows a fat baby becomes a fat adult and a fat adult is NEVER EVER going to win Miss Universe.

They do have a pretty high rate of breastfeeding initiation (67 percent, YAY!), presumably that's acceptable because it's easier to fix boobs than a vagina? Not sure though. (P.S., boobs are also actually made to feed humans.)

All of this aside, even if there WAS a Vitamix hidden in your tit, I don't think this the best way to present this information. I wish I could say I'm surprised, but a country that hosts a best-ass contest, and grooms their Miss World contestants by putting silicone in them, is probably not into women eating what they want to eat. Also, I wish I could say this is just Brazil but this is actually always happening everywhere. But hey, THANKS A LOT BRAZIL for maintaining the status quo.

BRB gonna get an Oreo.

After The Flowers Die: The Postpartum Reality
11 Things Your Labor Nurse Wants You To Know--But Probably Won't Tell You

More:
ParentsBrazilBreastfeeding
Newsletter Sign Up
Raise the kind of person you'd like to know
Subscribe to our parenting newsletter.
Successfully Subscribed!
Realness delivered to your inbox