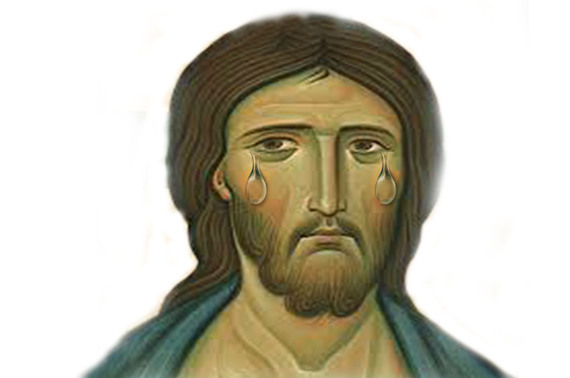 I've always wondered what Jesus would have said about acts perpetrated in His name. On the one hand, Christians called Jesus the Lamb of God, the Prince of Peace, and the Embodiment of Love. On the other hand, from its inception, Christian leaders initiated hateful policies and murderous acts -- even genocidal acts and wars -- in the name of Jesus. These perpetrators could not query Jesus on His views of their actions, nor did they even bother to examine their behaviors in the context of Jesus' teachings. While Christians have largely gotten over their misuse of Jesus' name, remnants of this practice persist. Politicians and others are relentless in putting their self-serving ideologies into Jesus' mouth.

In related fashion, Medieval and Renaissance artists reinforced the notion of a Christian Jesus that showed no connection to his Jewish heritage and to what theologians have recognized: that Jesus was born, lived, and died dedicated to Judaism. I think Jesus would have a lot to say about that. For example: "Why are they picturing me holding a cross? We loathed the cross. It reminded us of the tens of thousands of my fellow Jews who were slaughtered by the Romans. The only cross I ever held was the one the Romans brutally nailed me to."

The exclusion of Jesus' Jewish identity in these powerful art renditions contributed to a sharp divide between Christians and Jews.

I addressed the question of what would Jesus say about the abuse of his name in my book Jesus Uncensored: Restoring the Authentic Jew, in a chapter titled "How Dare You in My Name." In a mock trial Jesus testifies against church leaders, monarchs, and others, from the fourth century to modern times, who hijacked his name for their pursuit of power and wealth. I've also organized an art exhibit that counters the Medieval and Renaissance distortions in artworks by providing new images that put Judaism back in the picture. The artworks in this exhibit tell the two sides of the Jesus story: Jesus the dedicated Jew and Jesus whose life and teachings inspired a new religion. I hope these projects will help close the historic rift between Christians and Jews.

Now, Hugh Colmer, one of the participating artists in the "Jewish Jesus Art Exhibit," has produced a series of powerful images that instantly convey larger stories about the abuse of the core spiritual teachings of world religions. Although raised in the Church of England, Hugh Colmer champions the universality of the ancient roots and foundations of all religions.

The following two Colmer images of Jesus convey what Jesus might have been thinking: 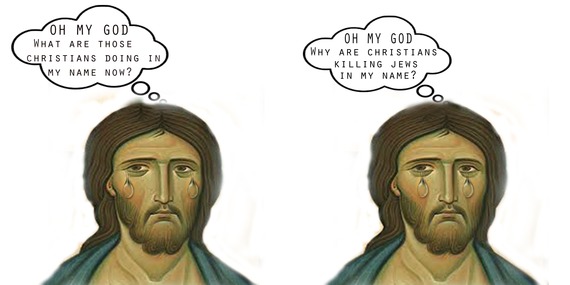 Jesus Laments: "In my name?" By Hugh Colmer

Indeed, what would the perpetrators say to Jesus about the Crusades, the Inquisition, the expulsion of his fellow Jews from Spain, and other brutal persecutions of Jews spanning centuries of European history? How would Martin Luther explain to Jesus the incitement of Luther's followers to burn synagogues, when he surely knew that the synagogue was Jesus' spiritual home, where he prayed every Sabbath (Luke 4:16, Matthew 4:23)? What about the charge that the Jews killed Jesus, when all of his followers were Jews? Is it conceivable that Jesus would be anything but horrified by the persecution and slaughter of Jews in His name? In modern times is it possible that Jesus favored one athlete, one performer, one candidate over all the others and wanted all but one to lose?

Here Colmer pictures the Buddha and his lament: 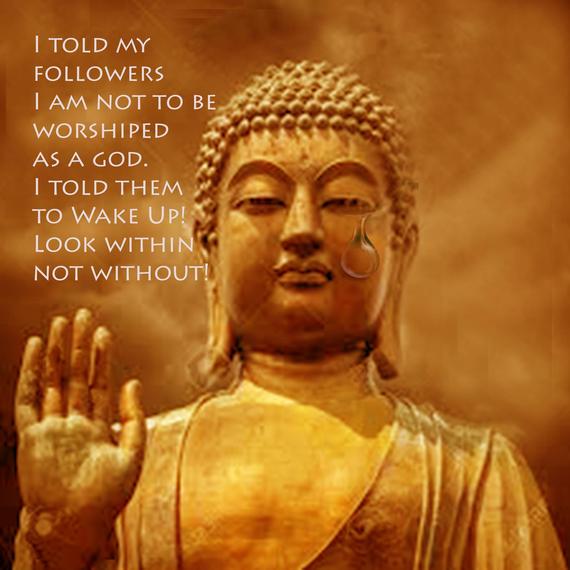 "If the Buddha is not a god, then why do people worship him? There are different types of worship. When someone worships a god, they praise him or her, making offerings and asking for favors, believing that the god will hear their praise, receive their offerings, and answer their prayers. Buddhists do not indulge in this kind of worship."

Colmer's image and comments about interconnectedness of religions: 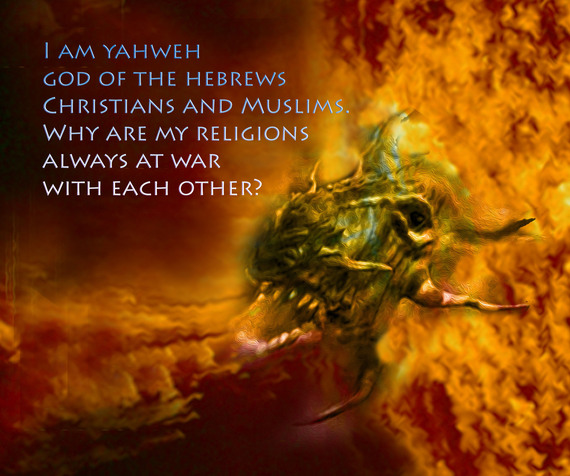 "The Old Testament (Torah) commands against graven images and particularly any visual representations of God: And the LORD spake unto you out of the midst of the fire: ye heard the voice of the words, but saw no similitude (Deuteronomy 4:12)."

Colmer offers a mythological image that includes some of the attributes of Yahweh, the "God" of the Bible, described in Psalm 18:8: "Smoke rose from His nostrils, and consuming fire came from His mouth; coals were set ablaze by it;" and also in Samuel 22:9: "There went up a smoke out of His [Yahweh] nostrils, and fire out of his mouth devoured: coals were kindled by it." In another section of Genesis the God concept, according to Colmer, "is clearly derived from much earlier notions of a connection to dragons-- and 'Lord' translates to Yehovah over 6,400 times in the Old Testament. Yehovah was originally conceived of as a local storm God like Enlil, Siva, Zeus and Indra."

In the next image, Krishna explains the "all is one" spiritual principle: 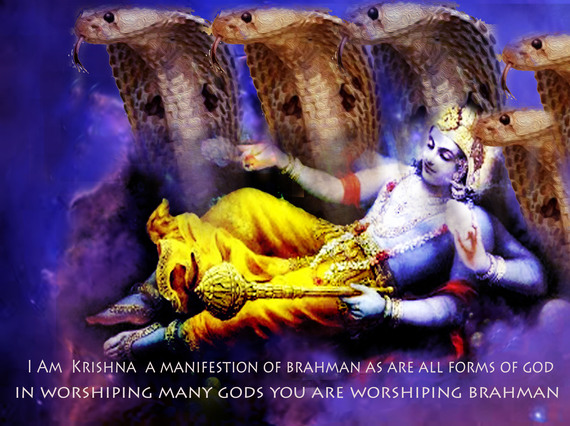 "The pantheon of Hindu gods has led many to think that Hinduism is polytheistic. But in polytheism various gods have independent existences. In contrast, the Hindu gods are all manifestations of the supreme God Brahman. Each represents aspects of Brahman which may suit the temperaments of different devotees."


This image and commentary traces a familiar religious practice to ancient sources: 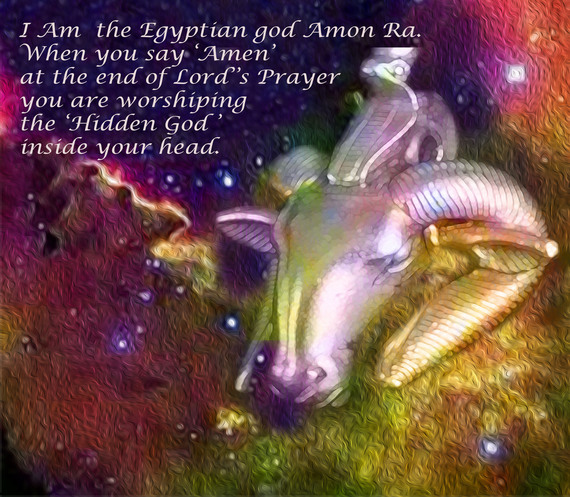 "In ancient Egyptian astronomy, Aries was associated with the god Amon-Ra, who was depicted as a man with a ram's head and represented fertility and creativity. During the 2160 BCE year period when Aries ruled the sun, priests built Ram sphinxes at Karnak and called Amon Ra 'Lord of the Head.' Amon is also the origin of Amen, which is often spoken at the end of a prayer or hymn."

Hugh Colmer is currently planning a book that will include over a hundred images. They will address a wide range of religions and the abuses, misunderstandings, and loss of the interconnectedness of religions when traced to their common ancient archetypal roots. It should be an important contribution to interfaith understanding and tolerance.

Bernard Starr, Ph.D., is a psychologist, journalist, and professor emeritus at the City University of New York, Brooklyn College.