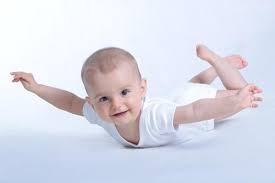 The two women strolled down the plane's aisle fully "babied up," my catchphrase for anyone traveling by air with an infant. One woman held her son, who I estimated to be about three months old, while her partner carried all the trappings so familiar to road warrior parents: car seat, formula bottle and bulging diaper bag.

I smiled at the two as they took seats 15B and 15C, directly across the aisle from me. While their son gazed wide-eyed at his surroundings, the traveler in 16A was also wide-eyed, his look alternating between disgust and panic.

"First time flying?" he said to the women while staring directly at their baby.

I felt it my professional duty as a standup comedian to interject.

"No, I'm sure they've flown lots of times. Haven't you, ladies?"

The man failed to see the humor, having already concluded this San Diego-to-Chicago flight was going to pass directly through hell due to the infant's presence. It's a common reaction from waaaaay too many travelers, who warily eye passengers under the age of 1 with the same look a bomb squad captain gives as he approaches a backpack left unattended in a government building.

I've never been one to hold a grudge against families traveling with small children. Maybe it's because I truly love babies. Maybe it's because my kids had frequent flier accounts before they acquired teeth. Or maybe it's because I own a top-of-the-line pair of noise cancelling headphones. Yes, flying with newborns presents a unique set of challenges, but I have found that, with rare exceptions, infants are the least likely passengers to cause mid-air disturbances.

Think about it: Babies don't bring music-spewing boom boxes aboard planes and refuse to turn them off, an offense committed by several women aboard a cross-country Spirit Airlines flight last month, resulting in a near mid-air brawl and an FBI intervention.

Babies don't practice yoga at 30,000 feet, unlike Hyongtae Pae, a passenger aboard a recent United Airlines flight traveling to Narita, Japan, from Honolulu. Apparently clueless about yoga's relaxing qualities, Pae allegedly shoved his wife and tried to bite several other passengers after they had the audacity to request he sit down. The pilot wisely returned to Honolulu, and Pae was arrested.

Babies don't throw their formula at passengers who clip products like the Knee Defender to their tray tables, preventing the seat in front of them from reclining. An incident two years ago aboard another United Airlines flight resulted in the Knee Defender owner being doused with water by a fellow passenger and a national debate about personal space aboard airplanes.

All of these facts were lost on the traveler in 16A who, still staring at the infant, began offering unsolicited advice to the two women.

"Here's what WE always did when traveling with our children," he said. "Breast feed when the plane's ascending and descending."

I held my tongue even though the comedian in me wanted to respond, "Did you and your wife take turns?" Incidentally, my habit of speaking before thinking is the primary reason my wife never let me hold our kids on planes.

The women displayed more tact. "Thanks, we'll remember that," one said. They settled into their seats. I did the same. Wannabe Dr. Phil, convinced his breastfeeding tip had saved the entire coach class from an unpleasant flight, pulled out a neck pillow, propped his head against his window and lowered the shade.

Ninety minutes later a low, guttural sound permeated my headphones, causing me to pause the movie I'd been watching. It was the unmistakable sound of snoring. I looked at the women and their baby. All three were asleep and silent. The offender was, you guessed it, the baby-hating traveler. Head tilted back, mouth wide open, his body had shifted toward the middle seat, much to the dismay of the seat's occupant. I watched her squirm but to no avail. The man slept, and snored on.

Twenty minutes before landing, the snoring ceased. Suddenly I smelled a noxious odor, one far more powerful than a baby's loaded diaper. I looked at the occupant of 16A and I just knew.

He had farted himself awake.