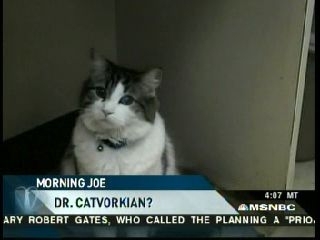 How can you not love a cute little kitty who heralds your inevitable, inexorable passing? Oscar the Cat, discussed previously on ETP, in conjunction with Rupert Murdoch, because we like to bundle our news, like Microsoft. In any case, this is an important story — which is why it's gotten coverage on CNN, Fox and MSNBC— but also, because it provides an awesome opportunity for impressive cat puns (and we're not pussy-footing around!). Dan Abrams looked almost pained last night on Abrams Country talking to pet psychic Patrice Ryan ("Have you ever met a cat like Oscar before?") and we couldn't resist 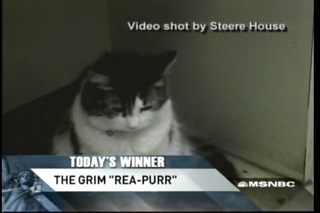 pulling the "Grim Rea-Purr" graphic, though it hurt our spleens a little. "Dr. Cat-Vorkian" on Morning Joe, on the other hand, was sort of brilliant, but we also could have been swayed by the excellent use of "Rosalita" to lead-in from commercial (and Jefferson Airplane's "White Rabbit" to tease Lindsay Lohan. Feed your head!). Morning Joe guest Luke Russert was also super-thrilled to have been introduced with this fun photo ("Thanks Joe, you just made my mom really proud"). Drama nearly ensued when George Stephanopoulos, competitor of Russert Sr., called in, but Luke handled it diplomatically, saying of Stephanopoulos: "Of all the Sunday morning talk show hosts, he's far and away the most cut and the most jacked." Well now, we'll take proof in the form of a hot-tub Facebook photo any day.

If you think this post was just an excuse to post pictures of cats, you're completely right. Singlefiers!