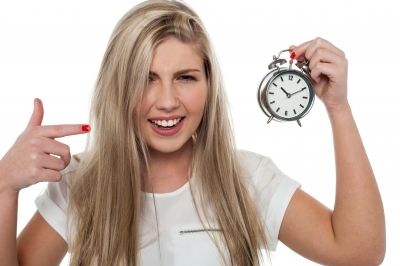 Somewhere along my 20s and 30s I dropped behind schedule on the marriage and kids phase of life. It wasn't planned. I mean, I've spent my whole life expecting that marriage and kids would somehow just happen. It's just that, well -- it never happened.

Single life hasn't been the worst thing. I've enjoyed a lot of it, especially the freedom.

And it's not like I haven't had my fair share of attention from the male species. To be honest, I am never short of attention -- just mostly from the wrong men! Maybe those finger-wagging people who told me, "Your problem is you're too fussy!" were right. "You need to learn to lower your standards a bit," they'd say.

Sure, I admit to being a little picky, and I do believe standards are important. But on the other hand, when I look back at some of the guys I've dated, I really don't think my standards are that high. So I'm going to cut myself some slack on this one!

So what went wrong? How did 40 surreptitiously creep up behind me, whack me over the head and yell, "HEY! Wake up! You forgot to have kids!"

The Answer: I DON'T KNOW!

I never know what to say to those who tell me, "I don't understand why you're single. You're a catch -- somebody should have snapped you up long ago!"

All I can say is, I didn't think time would pass so quickly. I was so busy living my life and thought I still had lots of time. Then one day I woke up and realized that time is a luxury I no longer have. During a routine visit to my gynaecologist he looked at me and said, "You need to hurry up and have a baby now! You only have two to three good years left." The reality came crashing down on my like a ton of bricks. I cried all the way on the drive home. I descended into a state of shock when I realized that it was now very real -- I may never become a mother. Being a mother was something I always deeply desired and something I always believed would eventually happen. The realization that this may never happen was devastating.

Initially I felt like a failure. It's hard not to feel like a loser when nearly everyone you know is married, has kids, or at least was married at some point. You see, there are still too many people in our society that see you as flawed. Something must be wrong with her. She's never been married and has no children.

Centuries of social conditioning have led us to believe that we MUST marry and we MUST procreate. Therefore, I've failed society's expectations.

The beginning of a new decade in our lives is often accompanied with contemplation -- an evaluation of how far you've come and where you are going, where you've succeeded and where you've failed. This is a good thing. It is good to hit the brakes sometimes -- STOP -- and THINK.

So I have been thinking. Thinking about the pressure society places on us to get married and have babies. If I think about it, I spent the last decade of my life in a frantic state of panic over this. As the calendar flipped over from one year to the next, my panic increased. I'm running out of time, I thought.

I've been thinking recently about what that panic was really about. It was about babies. I wanted to do things "properly," i.e. get married first, and then would come babies. I thought the pressure was about getting married, but what I was really stressed about was running out of time to have babies.

All is not lost -- there's the sperm bank!

During my 30s, I made an agreement with myself. If I reached the age of 40 and I was still single, I would eschew doing things "properly" and just hop over to the sperm bank and have myself a baby. The lack of a relationship or marriage was not going to stop me from becoming a mother!

However, over the years I debated this idea. Is it fair on the child? Is it right to bring a child into the world who will not have a father in his/her life? Do I want to be a single mother -- it's not easy. Would I be making a mistake? Is it just a stupid crazy idea?

Then... after all of that, in an about-turn, I suddenly concluded that children may not be for me. This took me by complete surprise. But this thought hit me after I spent some time looking after a friend's 7-year-old at the beginning of 2013.

During that time I realized just how much hard work it is to raise a child. It's downright exhausting. As I sat outside sipping on a cup of tea to relax after a hectic day with the kid, I had a serious conversation with myself.

Is this really what I want, especially at this age? Let's face it, running around after a toddler in your 40s is a lot more taxing than in your 20s and 30s.

And truth be told, I am a bit of a free spirit. I love being able to come and go as I please. I love traveling and exploring new places. I enjoy my freedom.

So... is a child really the right thing for me? A child changes your whole life. I had to consider the possibility that what I desired my whole life, may not be what's right for me. Maybe that's why marriage and kids never happened for me?

Yet at the same time, I also desire stability -- a home, a loving partner, a family, someone to grow old with.

And then along came THE BIG 4-0

Discontent doggedly clung to me during the previous decade of my life as I grappled with the painful questions of why. Why have I not been blessed with a good man and a family? Why can I not succeed at relationships? What is wrong with me? For a long time I blamed myself. I figured the common denominator in all my failed relationships is ME. And while I acknowledge the things I've done wrong in relationships, I know that it is not all my fault. Maybe it's simply a matter of, as the words of a Michael Bublé song say, "I just haven't met you (him) yet."

Now at the end of this introspective year and two decades of internal conflict on this matter, I have finally come to terms with singlehood. I'm not quite sure when it happened, but sometime between sitting outside under the stars sipping my tea and then later when the baby/sperm donor idea fell through (in a moment of broodiness I did actually take up this idea again), I finally let it go.

In a moment of astute clarity it dawned on me. Perhaps this is not meant for you. Perhaps you are meant to be doing something else with your life that a husband and children would prevent you from doing. Maybe my destiny lays somewhere else and no amount of yearning and pining over something that is not meant for me is going to make it happen.

A funny thing happens when you hit 40 and you're still a single childless woman. You let it go. It's as if you feel the sand in the hourglass has run out. Game over. And then an unexpected sense of peace comes over you.

I no longer worry about "running out of time."

I'm no longer all that interested in "meeting someone." If I do meet someone, great! But if not, it's okay.

I no longer even really desire a child. If one did come along, I'd be over the moon! It's just that I no longer worry about it.

I no longer believe there's something "wrong" with me.

For the first time in my life, I'm at peace with being single.