I first registered to vote in 1996, the year after I turned 18. My decision was not based on ideology, but rather my preference for the sitting president, Bill Clinton. I liked President Clinton, figuring that the guy who was doing a good job on the economy and keeping the world from falling apart was worth a try.

Since then I've become more educated on the history of the two parties and how they became the organizations we see today. Neither party has a spotless record on a whole host of issues, and up until today I would be the last person to say the Democratic party is a perfect party. I disagree with a few of the party's positions, and I find it to be too cosy with Hollywood on issues like copyright and so-called piracy protection.

But the last two weeks reminded me of why the choice I made twelve years ago was the right choice. The two conventions should tell America all it needs to know about the Democratic and Republican parties just as the last eight years have shown us. 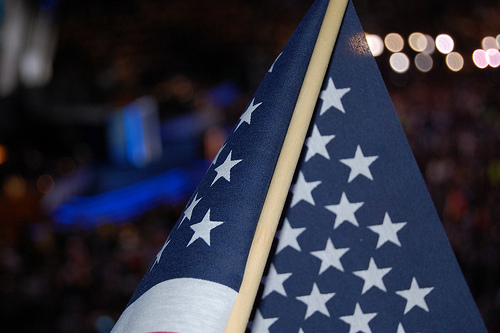 The Democratic party, for better or worse, believes in a Frank Capra/Jimmy Stewart view of the world. It says time and time again that through our collective might we can improve the nation, and as a byproduct the world. It is optimistic to the point of being almost corny. The party looks as the world as it is, and says "Gosh darn it everyone, let's roll up our sleeves and clean up this mess." It is no coincidence that the current leader of the party, Barack Obama, is the sort of guy you can imagine saying "by golly" and not in an ironic way.

By contrast to the Democratic sunshine, the Republican party is night. Their view of the world is one in which everything is just a shade of negative, and that is the cold heart underlying the cynicism of speakers like Sarah Palin, Rudy Giuliani, and Mitt Romney. They see a world of despair and depression and they wallow in it. The Republican party and the conservative movement that supports it is all about being the snarky guy in the corner playing the angles and making a buck off the foibles and failures of others. For a few it promises the spoils of war - both ideological and real war - but for the rest it just offers a way of wallowing in darkness without any optimistic movement towards a better day.

That reminded me, of just why I am a Democrat. As imperfect and disorganized as they may be, I am a part of a group of people who wants us to move forward to something greater no matter how unattainable perfection may be. Cynicism and nihilism is bad on an individual level and even worse collectively. There are downsides to optimism (regular disappointment is one of them) but it is a far better thing to make a footstep in the positive direction rather than to embrace the darkness and never have hope.