The holiday season and I have not been getting along in recent years. In fact, we've been on the outs since junior high. A week before Christmas, my mother had a major heart attack and underwent an emergency quadruple bypass when I was 12. Three years later she suffered another heart attack, followed by a stroke right before Thanksgiving.

In the years that followed, the holiday magic dwindled dramatically as my parents did the bare minimum of celebration. The real Douglas fur that was so large it needed to be cut so that it would fit in the doorway was replaced with a 4-foot artificial tree that sat on our coffee table. With other tensions running deep throughout my family tree, there were no longer gatherings with extended family that once filled up December. The stark contrast of "new" holiday season, usually celebrated amongst my parents and I, made the void of seasons past more noticeable.

Then there were the years where I lobbied for an attempt of tradition. Call me a masochist, but I thought that shoving the holidays down their throat my parents would embrace. Multiple times I forced family members to unite for a conventional meal (purchased from the grocery store that just needed to be warmed up), even though the majority of the time would be spent playing referee between guests. It was a safe bet that by dessert, someone would be in tears after a screaming match. The harder I attempted to immerse my family in the holiday spirit, the more depressed I felt. No matter how many trays of cookies I baked or holiday specials I made my mother sit though, nothing changed the fact that my parents will never celebrate the holidays in the way we used to during the first part of my life. 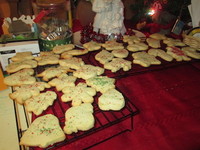 As the weather began to cool down last month, my annual holiday stress began to manifest. With last year's holiday season leading to a major meltdown, it became clear that I had to change my approach. Either I embrace their attitude or forge my own path in becoming comfortable with the holiday season as an adult.

This Thanksgiving for the first time in my entire life, I did not spend it with my parents or any members of my family. Instead, I accepted an invitation from one of my best friends, who has watched my holiday stress explode repeatedly each year. We ate dinner with her boyfriend, son and two close friends. There was no passive aggressive comments or judgement passed at this dinner table, only delicious home-cooked dishes. I didn't have to walk on eggshells waiting for the first outburst or worry if everyone was enjoying themselves.

The day was spent with people who wanted to be with each other for enjoyment, not obligation. It was the first holiday in over a decade that I did not go to bed filled with a sense of longing for a "real" holiday. Making my own agenda and celebrating with likeminded people made the day much more gratifying. Instead of expending energy forcing broken traditions on the uninterested, I was filled with warmth celebrating with people who commemorated the day the way I had been longing to do so for years.

The holiday celebration and my love for family has nothing to do with each other. There are 363 other days out of the year to enjoy time with my family, doing things like eating Chinese food while watching reruns of Seinfeld. This new setup allows freedom for me to experience my own holiday fulfillment, and for my parents to not have to put themselves through a forced facade of cheer.

Perhaps there will always be a part of my that will miss the holiday season I experienced as a child. But now that I am learning to create new holiday cheer as an adult, those memories can be reflected on with fondness rather than yearning.

More:
preparing-for-the-holiday-seasonhealthy livingholiday depressiondepressiondivorce
Newsletter Sign Up
The essential guide to taking care of your mind and body
Subscribe to HuffPost’s wellness email
Successfully Subscribed!
Wellness delivered to your inbox