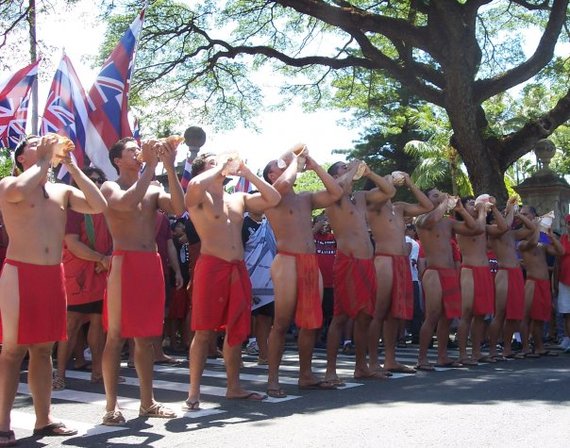 The Hawaiian sovereignty issue is heating up.

This week, Dr. Kamana'opono Crabbe, CEO of the Office of Hawaiian Affairs, sent a letter to U.S. Secretary of State John Kerry Friday, which, spurred by due diligence responsibilities to the Office, sought clarification on Native Hawaiian sovereignty related issues. The OHA Board of Trustees responded quickly, attempting to rescind Crabbe's letter.

The public volley fire certainly reinforces suspicions that speculated conflict has been growing in the organization over the embattled and flattering nation-building effort.

A History of Confusion

Since the Rice v. Cayatano decision in 2000, some Hawaiian organizations have sought federal recognition for Hawai'i's native people. Other Hawaiians, supporters of political independence, have consistently fought this effort, pointing at the illegal overthrow and subsequent annexation of the Hawaiian Islands as a basis for their sovereignty claims. These claims are well-documented and supported by the U.S. Apology Resolution, P.L. 103-150, signed by then President Bill Clinton in 1993, which acknowledged the illegal nature of the overthrow and subsequent illegal seizure of the lands of the Hawaiian Kingdom.

The latest episode of this long-standing issue began in 2011 when a newly elected Governor Neil Abercrombie worked with the state legislature to support a new nation-building process through the passage of Act 195. The purpose of the law was specific:

Purpose. The purpose of this chapter is to provide for and to implement the recognition of the Native Hawaiian people by means and methods that will facilitate their self-governance, including the establishment of, or the amendment to, programs, entities, and other matters pursuant to law that relate, or affect ownership, possession, or use of lands by the Native Hawaiian people, and by further promoting their culture, heritage, entitlements, health, education, and welfare.

The Office of Hawaiian Affairs (OHA) spent close to $4 million on the Hawaiian Roll Commission, commonly known as Kana'iolowalu, in the first two years alone. Despite this extraordinary expenditure, less than 19,000 individuals voluntarily registered by August 2013, which amounted to less than 4% of the global Native Hawaiian population.

A second bill, Act 77, was passed to in 2012 to add OHA's former efforts at a Native Hawaiian registry to the Roll, forcing many beneficiaries onto the list without seeking or obtaining their consent.

Many considered to the effort to be a largely bungled and failed one, yet the Trustees further granted additional expenditures of approximately $3 million to the floundering effort and took control over the nation-building process earlier this year.

Many have wondered why approximately $7 million of Trust funds were spent on a failed process when there remain so many critical needs in the Hawaiian community that go unmet by the Office.

OHA Takes Over the Process

When OHA took control over the process, they promised to serve as a "neutral facilitator" for the community. Many questioned this. Rather, a number of beneficiaries suspected that leaders of the effort, like former Governor John Waihe'e III and his long time advisor Norma Wong, are committed to federal recognition.

OHA did little to sufficiently address these suspicions.

The aggressive roll registry process appeared to be evidence of the larger agenda of federal recognition. In 2013, the Roll Commission and OHA began publishing public notices claiming that "Native Hawaiian who choose not to be included in the official roll risk waiving their right, and the right of their children and descendants, to be legally and politically acknowledged as Native Hawaiians..." Hawaiians began to sign up for fear of losing rights.

Today, only approximately 20% of Hawaiians are enrolled, and because many were automatically enrolled through Act 77 in 2012, most have not enrolled voluntarily.

In 2014, OHA announced a Convention would be held by the end of the year, and only those who were registered on the Roll would be allowed to participate. OHA then held a series of town halls across Hawai'i. The meetings were widely contentious, with many Hawaiians asking for a two-year moratorium on the process until the community could be better educated on the process.

OHA to date has refused to provide the community any additional time to educate themselves about the process.

CEO and Board Stand-Off

On Friday, May 9, in a rather shocking move, OHA CEO Kamana'opono Crabbe sent a letter to U.S. Secretary of State John Kerry seeking clarification on the following questions: 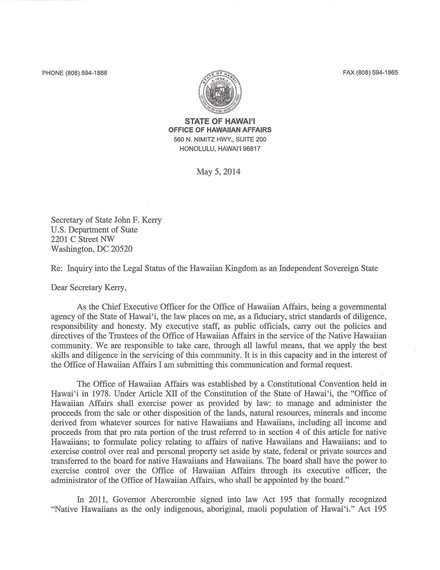 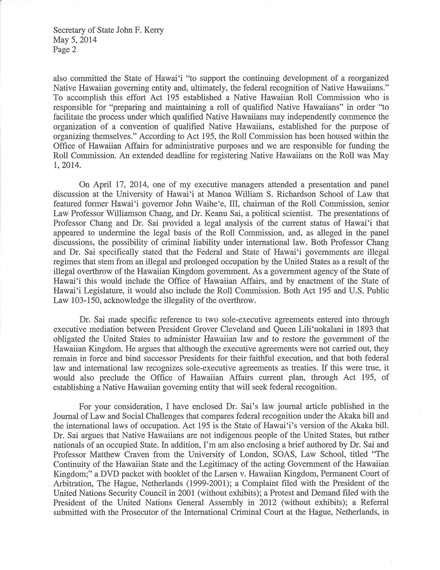 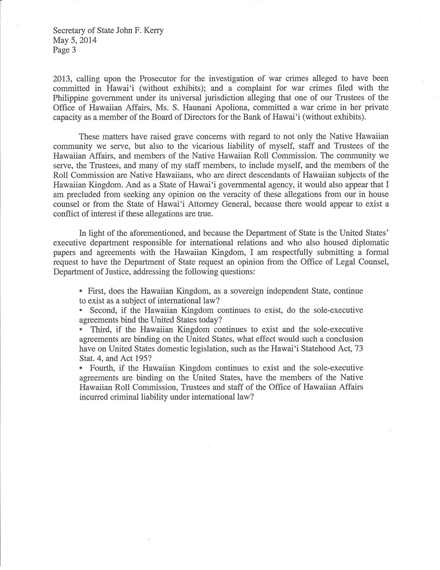 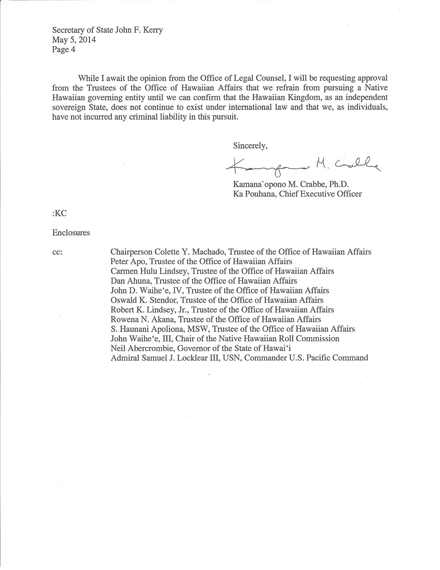 It appears the letter was intentionally sent to force the Trustees to reveal any hidden agendas in the nation-building process.

The letter certainly caught OHA Board of Trustees by surprise, as they quickly sent a second letter to Kerry, signed by nine Trustees, attempting to rescind the letter. 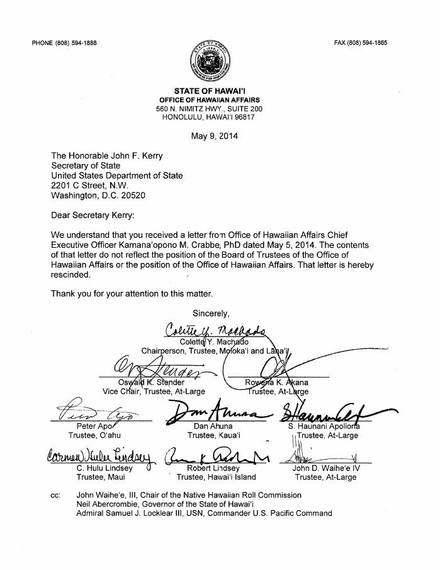 Kaua'i and Ni'ihau Trustee Dan Ahuna appeared to have a change of heart, as he would send a letter removing his name and support from the letter rescinding the CEO's letter the next day. 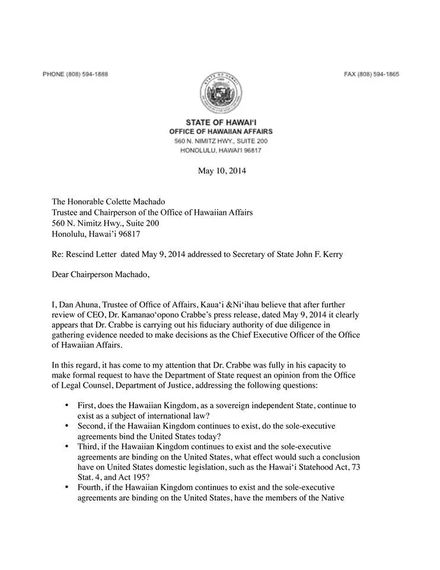 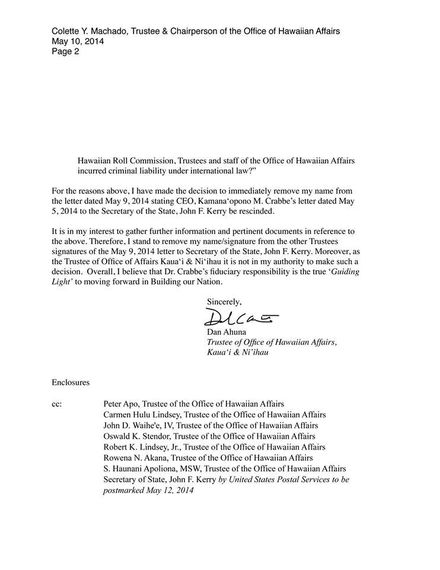 Some believe the Trustees may attempt to remove Crabbe from his position for sending the letter, but for the last few years, Crabbe has used his hiring authority within the Office to strategically hire friends and allies. Trustees must consider whether or not they would face a crippling exodus by Crabbe's staff if they make any further moves to censure or remove him.

The CEO's bold move has certainly created one of the most interesting threats to the Office of Hawaiian Affairs in recent memory.

Author and scholar, specializing in culture, the environment and politics