For anyone who has driven around Cincinnati in recent weeks -- particularly inner-city, predominantly African American neighborhoods -- it would be nearly impossible to miss the menacing billboards hovering above city streets: "VOTER FRAUD IS A FELONY," the billboards announce in giant letters, adding that the penalty can be up to 3 1/2 years in prison and a $10,000 fine. 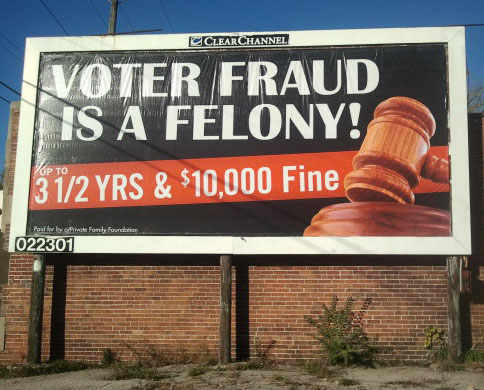 Let's add some facts and some context:

First, voter fraud is an incredibly rare event which, unfortunately, too often serves as a political boogeyman for those who wish to suppress the vote. Consider the 2004 Presidential cycle here in Ohio, which was one of the closest elections in the history of this state. That year, there was a 0.00004 percent incidence of voter fraud -- in other words, about the same likelihood of getting struck by lightning.

Second, these "voter fraud" billboards were not placed randomly or evenly across the Ohio landscape. They were placed primarily in urban environments, with high densities of African American voters in cities like Cincinnati, Cleveland and Columbus.

So then we have to ask ourselves, if voter fraud isn't really a problem, why would an unknown private family foundation -- which has been unwilling to release its identity -- spend significant money calling attention to it, and choose to do so mostly in areas that are far more likely to have low-income and minority populations? The answer is as sad and shameful as it is self-evident: To scare. To intimidate. To confuse.

As a member of Cincinnati City Council -- charged with representing the entire city, both black and white, Democrat and Republican -- I took the intent of these billboards to be an insult to all Cincinnatians. Others saw it that way as well.

When I reached out to Lamar Advertising Company -- the biggest outdoor advertiser in the country -- they said they would happily donate billboards to help us offer a rebuttal to the message of intimidation. Starting today, billboards are going up all across the city announcing a patriotic message: "Hey Cincinnati, Voting is a Right - Not a Crime!" 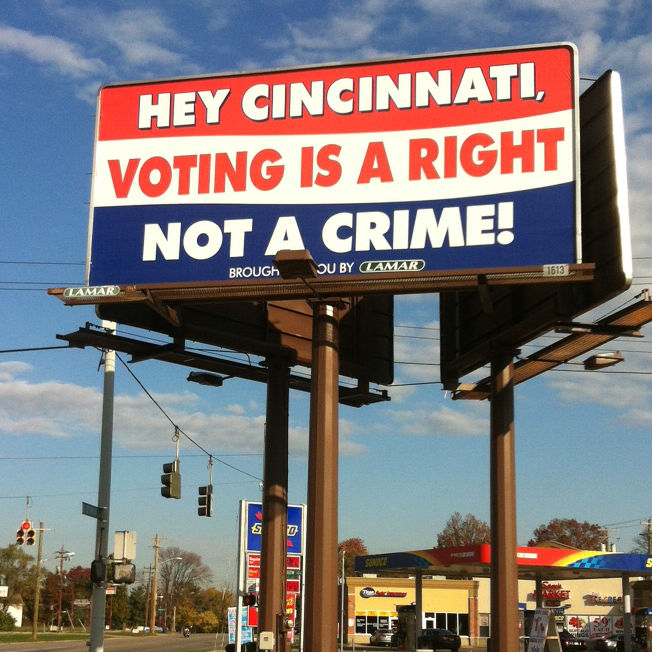 I'm pleased that these communities and these companies have stepped up to do the right thing, encouraging voters and not intimidating them. As an elected official in the state that it looks like will again determine the outcome of this election, I want citizens to feel supported for their participation in our democratic process and not scared away.

These billboards represent just one skirmish in a larger battle over the ways in which people win power. Candidates and political parties should win elections based on the merit of their ideas and on much how they can excite people around a vision for the future. Suppressing the vote is a cheap way to win, and frankly, is a desperate last gasp from people and groups who know that their ideas alone won't carry the day.

In Cincinnati, I'm glad we've taken down a message of fear-mongering and replaced it with a message of encouragement. And as we move forward, when people decide to play dirty, it's our collective responsibility to push back. I'm grateful to have been able to help lead the charge in including more voices -- not less -- in the conversation about our country's future.