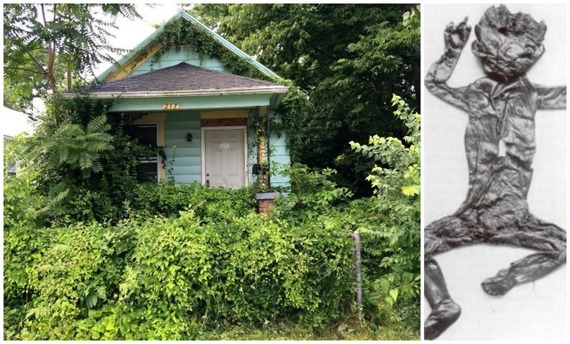 According to the CNN, as a boy stepped into an abandoned house in Dayton, Ohio, on the morning of Sunday 15, he was terror-stricken to find a mummified corpse of a man hanging by the neck from a belt.

Edward Brunton was the man. He occupied the house in circa 2009, when he was about 40 years old. Brunton hung himself to death with a belt in his closet, and his body had been there for five years thereafter, only to be discovered by a curious boy in 2014. At the time of suicide, Brunton was still new in the neighborhood, as he had moved in only months before. He had left his family and friends, hence no one ever inquired into his absence.

The almost air-free closet preserved the body from decomposition, insects and animals, giving it a mummified effect, according to Ken Betz, director of the Montgomery County Coroner's Office.

Hearing the boy's ordeal, the mother (Michelle McGrath) had gone in to investigate the house, when she sniffed a nauseating odor from the room that contained the closet. The body was discovered, and the police were called. Brunton's brother recognized the body and confirmed its identity.

As the story sweeps into mainstream and alternate media, it is being called the real-life version of a classic horror movie scenario. On an equally bewildering note, a mummified cadaver of a 3000-year-old humanoid has been discovered in Northern Germany, in the same location where the Nebra Sky Disk was found in 2001. The body, although humanoid in appearance, is no more than 3.5 feet tall, and has no genitals. It's basically alien in appearance, and seems to have just enrolled into the trio of mummified alien bodies found on earth. Courtesy of Paranormics.

While mummies are so on the go, we may also mention the mummified cat found walled up in a 17th century "witch cottage". The Pendle Hill in Lancashire, England's "witching country", a cat mummy was found during a routine examination of a local reservoir. Archaeologists were called, who unearthed a 17th century cottage from the area. It is said that the cat was bricked up in the cottage walls as a protection charm from evil spirits.

"It's not often you come across a fairytale cottage complete with witch's cat."

With this we end today's menagerie of mummies, fan me on HuffPo for more!