If America's fracking boom is creating a job boom, it's hard to tell.

Maybe you've heard of the miraculous job-creating powers of fracking. President Barack Obama has claimed fracking could create 600,000 jobs. The Chamber of Commerce has declared that fracking creates "millions of jobs." This week, The New York Times gave fracking credit for "a transformation spreading across the heartland of the nation," one "changing the economic calculus for old industries and downtrodden cities alike." 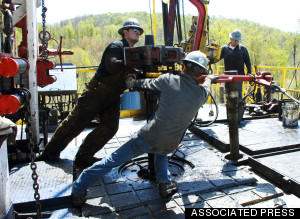 Workers on a natural-gas well in Pennsylvania.

The story focused on a patch of Ohio from Youngstown to Canton, where "entire sectors like manufacturing, hotels, real estate and even law are being reshaped." It suggested fracking -- where you pound rock with water, sand and chemicals to release the natural gas trapped inside, along with rainbows and unicorn farts and American jobs -- had made Ohio's job market better than the rest of America's.

One supposed side benefit of fracking is that energy gets so cheap that factories will just have to start opening up and hiring people in America again. Sounds transformational -- calculus-changing, even. Except for the math part: If you look at actual numbers, it's kind of hard to see the evidence of this boom in any way that matters to humans, Dean Baker, co-director of the Center For Economic And Policy Research, a left-leaning think tank, pointed out.

"The data do not seem consistent with the story told in this article," Baker wrote.

Baker tried and failed to spot the boom in factory jobs in Youngstown: 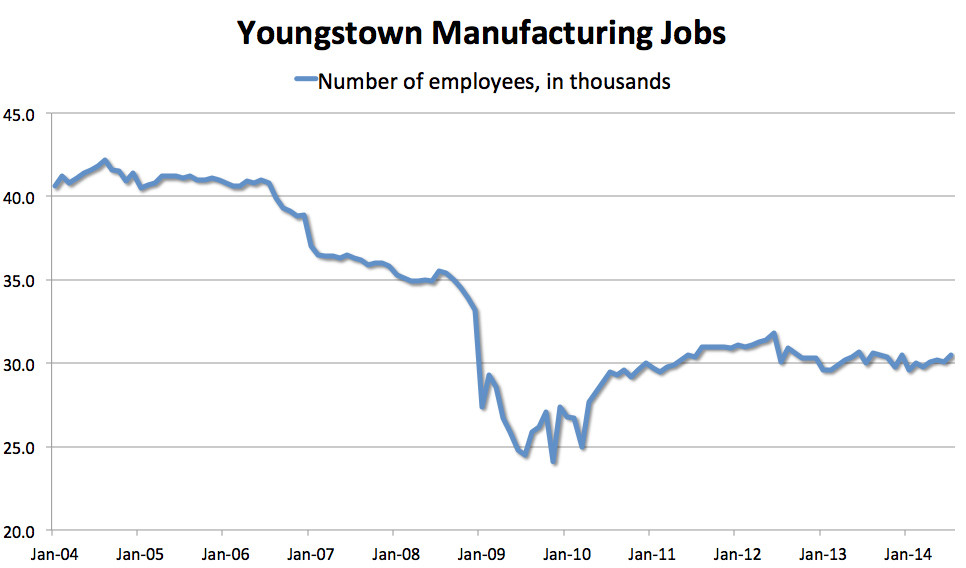 Zoom out to an even longer-term view, as the Washington Post's Jim Tankersly did, and the picture is even more depressing. It would take 30,000 more jobs to get Youngstown back to where it was in the 1990s, Tankersly pointed out: 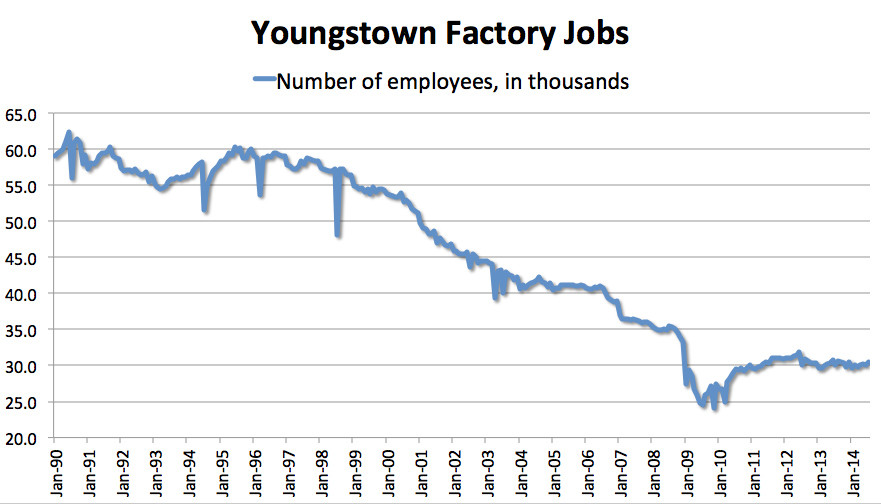 Look at all of Youngstown employment, to include all those other industries like hotels and real estate and law, and it's still hard to see the boom: 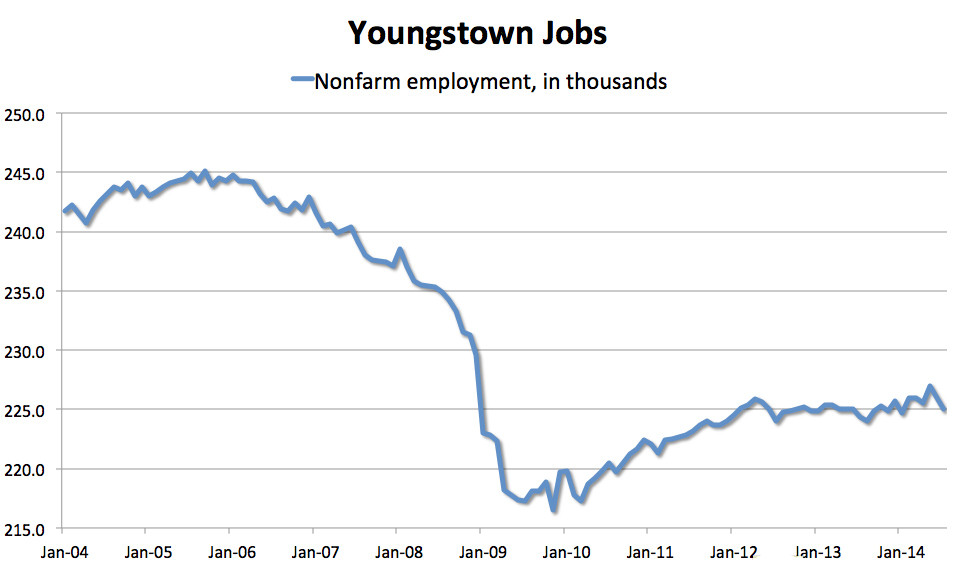 The NYT made a big deal out of how Ohio's unemployment rate, 5.7 percent, is lower than the national rate of 6.1 percent. But in the boomy boom town of Youngstown, factory employment is 15 percent lower than just before the recession. Total employment is down 5 percent. In contrast, total U.S. employment is at a record high.

The picture's a little better in Canton, but not much. Here are Canton's factory jobs: 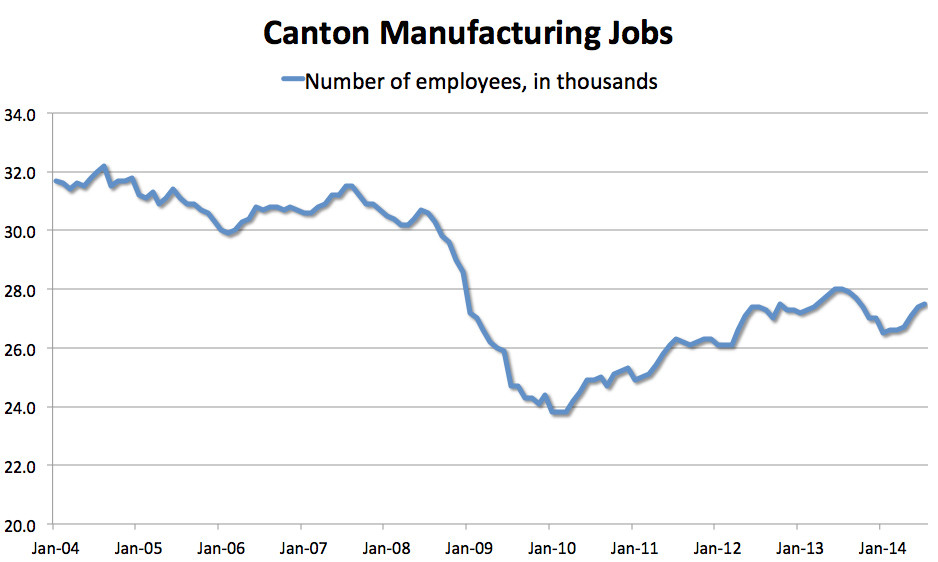 And here's total employment in Canton: 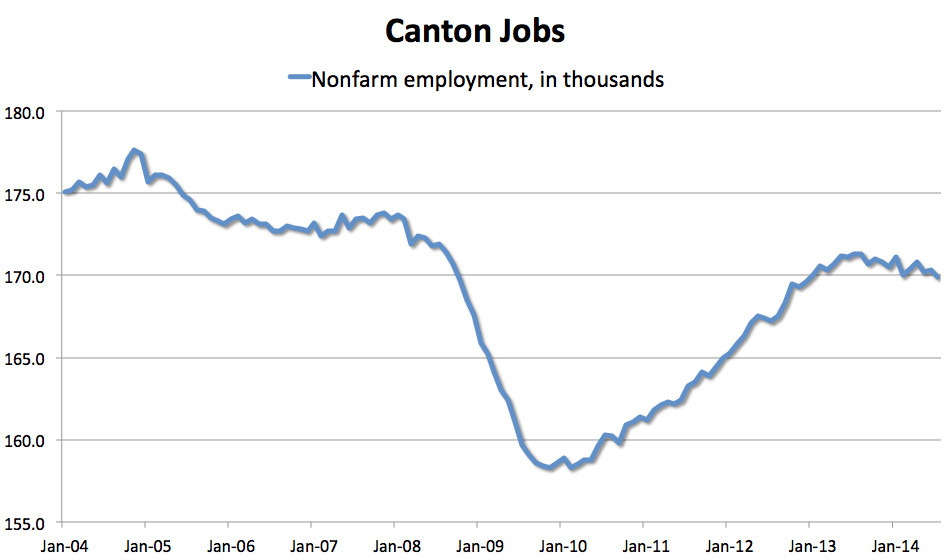 Note how the line turns down at the end of the chart. The boom's not petering out already, is it?

I'm not suggesting the NYT is making stuff up. It quotes a lot of locals who believe in the transformational power of fracking. It is possible that job growth in Ohio might look a whole lot worse if not for fracking. And the fracking boom is still pretty new, having really gotten going in earnest around 2008, in the midst of the recession.

I am suggesting that fracking is not creating nearly enough jobs to justify the environmental havoc it wreaks. It wastes trillions of gallons of water. It pumps toxic chemicals like lead, mercury and uranium into the earth. Some of this stuff, along with byproducts of fracking like methane gas, leaks into the water supply. That may make tap water flammable and certainly hazardous to human health. It causes earthquakes, maybe. It fosters our dependence on fossil fuels, even as greenhouse gases are already being pumped into the atmosphere at record rates.

And, again, it seems to barely move the needle on job growth. The post-recession recovery in jobs in Ohio is indistinguishable from a normal post-recession jobs recovery with or without fracking. For example, note how Youngstown's factory sector is in no better shape than the U.S. factory sector, which also has not enjoyed all that much of a boom: 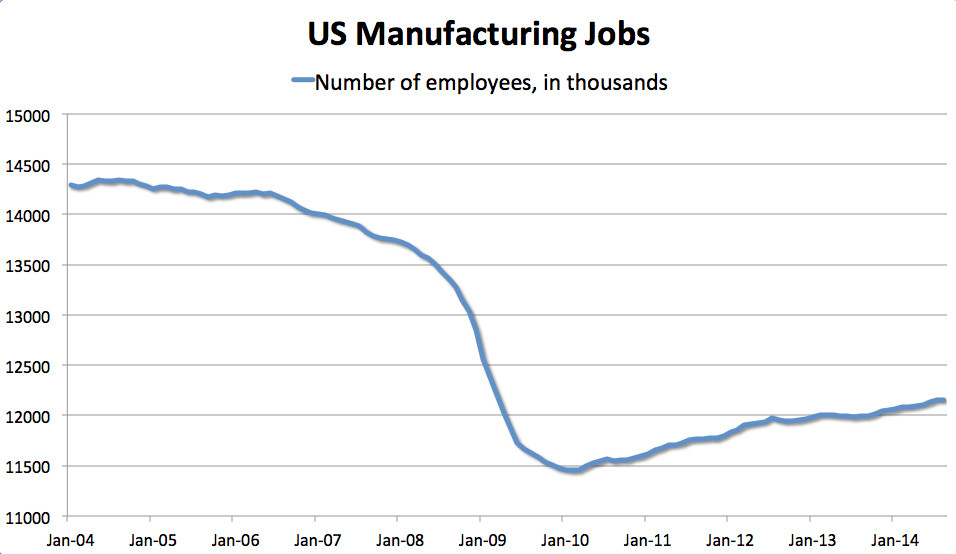