CINCINNATI – The several hundred people that filled the sanctuary of Faith Christian Fellowship Church on the outskirts of Cincinnati on a Monday evening in July murmured their indignation as Heidi Huber blasted a book that taught that homosexuality was normal. The book wouldn’t be important except it had popped up on a Catholic school association’s website as an example of what elementary school students might read under the Common Core State Standards.

“We are arming the enemy by allowing them in our classroom,” Huber said.

Huber’s talk was billed as an information session on Common Core, a set of instruction guidelines that specify the skills students should have in math and English from kindergarten through high school graduation. But it included a PowerPoint presentation of President Obama’s 2008 campaign platform that promoted preschool access for all children and the Affordable Care Act, both of which she saw as an encroachment on parental rights. Huber’s message to parents was that the problem with the standards is more than academic; they represent the agenda of corporate interests and the left wing 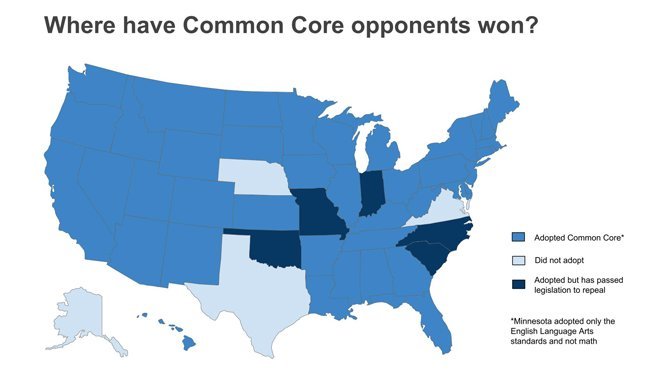 Five of the 45 states that initially adopted the Common Core have voted to repeal the standards, and, when state legislatures convene again this fall, more may do so. The opposition has been stoked by conservative and progressive pundits alike, but the reversals have been largely the result of state leaders responding to opposition from parents, spurred to action by talks like Huber’s.

“There are a bunch of different reasons people oppose Common Core,” said Patrick McGuinn, an associate professor of political science at Drew University. But “the arguments that are being made by the opponents are … rarely about the standards themselves. They’re a symbol of other things.”

For some, Common Core has become emblematic of over-testing in schools. For others, like Huber, it’s a matter of personal freedom. And while the parents have serious academic concerns –- that the standards will limit the teaching of literature or that they aren’t developmentally appropriate for younger children –- those are often intentionally overshadowed by bigger issues that unify and rally people.

“What I try to convey in presentations is that while the standards are untested and unproven and, in my opinion, horrible, the reason we are concerned about them is who controls them,” said Huber, a finance manager at a private Christian school and a regional leader in the conservative Ohio Liberty Coalition. “While you can argue about the quality of standards, what ultimately is the violation is the fact that you have usurped state and parental authority.”

And that message is resonating. An incumbent Republican in the Ohio Assembly was defeated in a spring primary, “completely on the issue of Common Core,” Huber said. (Although two other Common Core opponents lost to incumbents.) A bill to repeal the standards stalled in committee, but a second one has been introduced and legislators have a strategy to quickly bring it to the house floor. About 150 Ohio residents attended Monday’s hearings on the new bill.

Common Core was developed in 2009 by a coalition of states led by the National Governors Association and the Council of Chief State School Officers and initially received bipartisan support. It was generally acknowledged that standards in many states across the country were weak, and Common Core was an attempt to raise them. In math, students would be required to understand concepts and be able to explain how they arrived at their answer, rather than just providing the correct answers. In English, they would be asked to support arguments with texts rather than opinion.

The standards aren’t a federal mandate, but have been backed by the Obama administration. The Department of Education tied federal grant money to adopting “college and career ready standards,” which most states took to mean Common Core.

Since March, Indiana, Missouri, North Carolina, Oklahoma and South Carolina have repealed Common Core, and similar legislation has been introduced in at least 16 other states, although few of the bills have made it to a vote. Still, fierce battles are raging in a handful of states like Louisiana, where Gov. Bobby Jindal tried to repeal the standards with an executive order and was sued, and Arizona, where November’s election could give Common Core opponents the majority in the legislature.

The opposition has been successful because of tactics like Huber’s, McGuinn said. “The arguments for supporters are more pragmatic, intellectual, technical -– about the need for Common Core and what it is and what it isn’t. [But] it’s hard to combat impassioned, ideological rhetoric with fact sheets,” he said.

Despite the efforts of both sides, surveys show that the majority of Americans still don’t know what Common Core is, and McGuinn is wary of overstating how large the grassroots movement is. Indeed, Facebook pages set up by opponents typically only garner a few thousand likes. Ohio’s falls just short of 3,000 for instance.

In some ways, however, the small numbers only add to the David versus Goliath narrative these groups are crafting. “This is a true populist driven movement,” said Emmett McGroarty, education director of the American Principals Project, a DC-based conservative advocacy group.

McGroarty has connected parents around the country with experts like Sandra Stotsky, an English curriculum expert who was one of two people of the 29-member Common Core validation committee who refused to sign off on the standards. He also gives them talking points to post on websites, which he often helps set up. “What we’re seeing is that a mom armed with the facts and defending her children is far more powerful than any kind of corporate donor or elitist view,” McGroarty said.

Common Core supporters, though, frequently question the accuracy of the opponents’ arguments -– including what the American Principals Project promotes -– and say there is too much confusion about what Common Core does and does not involve. For instance, some Common Core opposition groups warn that schools are mandated to collect data on students’ health history and family income.

Supporters argue that this is not the case. The standards’ rollout coincides with an Obama administration push to improve states’ data systems. Some of the same players are involved in each, but the two are not directly connected, and they say the data collection will not be as intrusive as portrayed.

The anti-Common Core sites also often include things like Planned Parenthood’s National Sexuality Education Standards, which suggest an outline for sex education from kindergarten through 12th grade. They are self-described as being informed by the Common Core, and opposition groups portray them as an inevitable next step for states that adopted Common Core or even as a part of it, despite their having no official affiliation.

In her talk at the Faith Christian Fellowship Church, Huber brought up the Planned Parenthood standards, drawing gasps from the crowd. She presented them as part of a federal school takeover that starts with the Common Core and ends with the total indoctrination of children. After the event, she perched on the edge of the stage as women flocked to her, asking if she would come speak to their group, snatching up her business cards and telling her they would pray for her.

Huber, who has been involved in education policy for the Liberty group for the past five years, first heard about Common Core early in 2013 and began researching the standards, surprised to learn that Ohio adopted them in June 2010. “My Spidey senses first went up because if this is off the radar, it’s probably on purpose,” she said.

Although Huber’s son attends a private Christian school, which has not opted into the Common Core curriculum, she still has led the Buckeye’s state fight against them.

In part, she sees the statewide adoption as undermining the school choice movement. If even private schools in Ohio adopt the Common Core –- as many have done –- homeschooling parents worry that there won’t be any non-Common Core-aligned curriculum for them to use. Both the SAT and ACT, at least one of which Huber’s son will have to take to get into college, will also be aligned to Common Core.

Since getting involved, Huber has helped organize hundreds of people to come to rallies and Senate hearings and become a link for parents who started reaching out on social media about changes they were noticing in their children’s schools.

Sarah Lewis, a mother of four in Celina, Ohio first noticed something was different last fall. Her third-grader was consistently brought to tears by his math homework and her straight A sixth-grader was bringing home English assignments so confusing even she couldn’t make sense of them. That’s when she started to research the standards. “It was a full-time job. Staying up late at night, getting up early in the morning,” she said. “That’s where I drew my own conclusion of the federal overreach, of the coercion.”

Lewis connected with several other parents in her area to form a local group of Ohioans Against Common Core and Huber made the two-hour drive from Cincinnati to give them a presentation. Driving around the state from group to group has become commonplace for her this year.

With every talk Huber gives, she assigns homework: Call the governor. Call your legislator. She’s determined to force politicians to address the objections and take a stand in their political campaigns. She’s hopeful the momentum is in their favor.

McGuinn isn’t so sure that’s true nationwide. “There’s a perception, a narrative of mounting opposition,” he said. “You have to put it in perspective. There’s a ton of smoke, but there’s relatively little fire thus far.”

He thinks many states may repeal Common Core, and Ohio could be among them, but pointed to Indiana, which repealed the standards and then adopted ones that were very similar. “I think you may see a lot more of the Indiana thing,” he said. “States drop the Common Core and then quietly replace it with something that’s the Common Core. That serves the political purposes.”

This story was produced by The Hechinger Report.