One of the talking points that the GOP has attempted to deploy in the battle over the stimulus package is, "Hey! Remember that New Deal dealie? Boy, howdy, wasn't that a massive failure!" Oooh, oooh! And what if the Nazis had gotten the bomb? Then we'd be in some serious doo-doo, tra-la-la!"

Anyway, freshman Representative Steve Austria heard that talking point and decided that it could be made way awesomer. And in an environment where his colleagues are playing fast and loose with the facts, who can blame him? Still, I think this revision took things a step too far with the editors of the Columbus Dispatch:

The day before, as Austria was explaining his opposition to the huge federal stimulus package backed by President Barack Obama, he told The Dispatch editorial board: "When Roosevelt did this, he put our country into a Great Depression. ... He tried to borrow and spend, he tried to use the Keynesian approach, and our country ended up in a Great Depression. That's just history."

Austria said he gave that message via telephone to constituents at a recent town-hall meeting.

Uhm, yeah. That led the Dispatch to point out that "Roosevelt took office in March 1933. Many historians date the Depression from the stock-market crash later dubbed Black Tuesday, which happened in 1929."

And so, Austria had to get back on point:

I guess now is as good a time as any to offer Austria the chance to familiarize himself with what the New Deal accomplished, via the handy graph Rachel Maddow deployed Monday night: 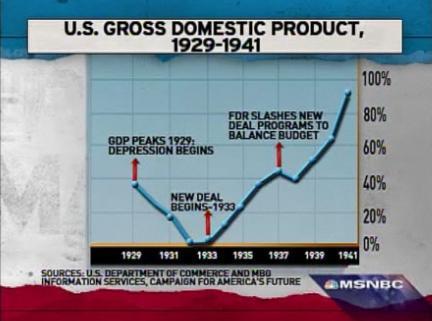