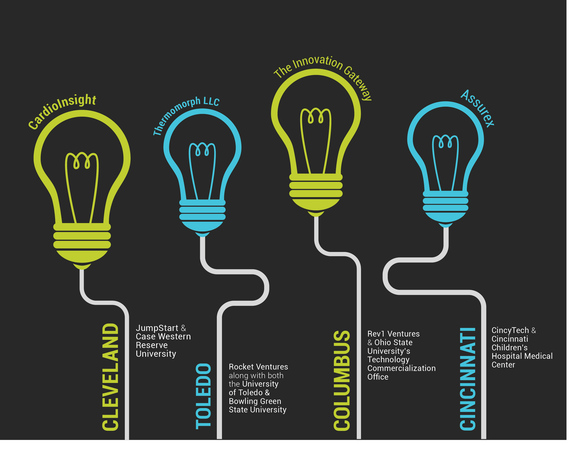 Ask any expert what made Silicon Valley possible and it won't be long until they bring up Stanford University. Combined with the rest of the local research community - much of it military-based - Stanford's outpouring of innovative ideas helped ignite one of the modern world's great engines of economic activity.

While Ohio in 2015 looks more like the Bay Area in the 1970s than today's Silicon Valley, it definitely has its own treasure trove of strong educational and research institutions. And with the financial support of the state's $2.1 billion Ohio Third Frontier (OTF) program, more and more of these institutions are teaming up with venture development organizations (VDOs) across the state to commercialize some of the nation's most exciting new technology.

Toledo In Northwest Ohio, Rocket Ventures has worked with both the University of Toledo (UT) and Bowling Green State University to spin a number of ideas out of their research and development departments into the commercialization phase. One of the most recent examples of this collaboration is Thermomorph LLC, a Toledo medical startup that is developing a device to locate and remove blood clots in the chest cavity.

Rocket Ventures partnered with the Tech Transfer office at UT to help the Thermomorph get off the ground, and a joint grant from the two groups is currently helping the company develop a prototype device for in vitro testing.

Cincinnati A few hundred miles to the south, seed-stage investor CincyTech has leveraged their support from the OTF to establish a strong relationship with Cincinnati Children's Hospital Medical Center. This relationship has helped support a number of companies formed around technology developed by hospital researchers.

Notable success stories from this relationship include CincyTech portfolio company Assurex. Not only was CincyTech an investor in this pharmacogenomics company, they helped commercialize the technology from the earliest stage and even organized a crucial bridge round to keep the company solvent after a large funding round collapsed. Since then, Assurex has grown from a handful of employees to nearly 400 and recently closed a $30 million Financing Round.

Cleveland In our hometown of Northeast Ohio, JumpStart has been fortunate enough to set up shop next to some of the nation's finest colleges, universities and research institutions. These connections have led to some truly massive success stories.

Take Cleveland's own CardioInsight, a JumpStart portfolio company founded to commercialize electrocardiographic mapping technology born at Case Western Reserve University. After receiving crucial early investment and business assistance from JumpStart, CardioInsight went on to raise more than $35 million before launching their first product. Soon after, they were acquired by medical technology giant Medtronic in a deal worth more than $90 million.

These are just a few Ohio success stories made possible by the close working relationships between the state's world-class research institutions and the network of entrepreneurial support organizations mentioned above. Without the strong support of the state government, much of this network would not exist, let alone be in a position to provide increasing amounts of investment capital and technical assistance to entrepreneurs and high-growth startups.

In truth, the same could once be said for California's Bay Area. Today, we think of Silicon Valley as a bastion of private VC firms, but we often forget that it was made possible through massive investments from the Department of Defense and other federal agencies intended to kickstart the fledgling semiconductor industry. This funding helped establish the research, investment and manufacturing infrastructure that built today's self-sustaining entrepreneurial machine.

Many other states simply don't have these kind of forward-thinking private-public partnerships. Ohio faces its share of setbacks as it transitions into a true 21st century economy, but the innovations emerging from institutions like OSU, The Cincinnati Children's Hospital, UT and Case Western Reserve University, and the strong group of OTF-supported organizations that have assembled to help commercialize these innovations, make it an exciting time to be researching and investing in the buckeye state.