Gas prices are at their lowest levels since the recession, helping to pad the pockets of American consumers. Meanwhile, however, oil and gas producers have seen their profit margins take a dive in the 12 months ended Aug. 31, according to data from Sageworks, a financial information company.

Net profit margin, on average, for privately held oil and gas extraction companies - which handle all aspects of exploration, development and production until the oil or gas leaves the producing property -- has dropped to two percent from nearly 15 percent in the previous 12-month period, Sageworks' financial statement analysis found.

Margins for oil and gas companies also dropped sharply several years ago after a precipitous drop in oil prices, leaving companies scrambling to slash spending in exploration and production.

"There tends to be a fair amount of volatility in this industry," said Sageworks analyst James Noe. "But this is one of the sharpest year-to-year declines in profitability that we've ever seen." 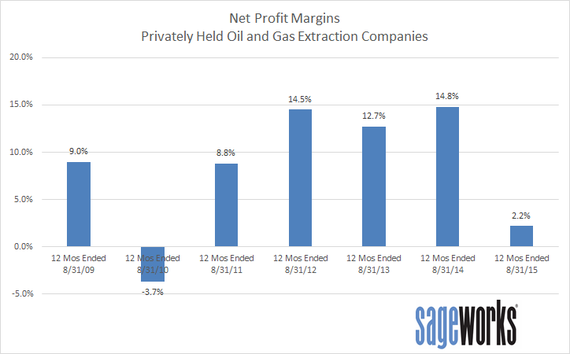 Major oil and gas producers such as Marathon Oil Corp. (NYSE: MRO) are reportedly slashing capital spending and jobs as they try to offset the pressure on profitability from months of falling prices tied to an oversupply in the market. Oil rig counts have fallen by 60 percent from an October peak, according to the Houston Chronicle's FuelFix blog. And Texas lost jobs in August for only the third month since the recession ended, according to a report Friday by Wells Fargo economists.

As for privately held oil and gas extraction companies, Sageworks' data show that revenues are growing at a 4.4 percent year-over-year rate, based on the last 12 months. That's moderately healthy, Noe said, but markedly slower than the year-ago period, when sales were increasing, on average, by 14.3 percent.

"If oil and gas companies were growing revenues at a breakneck pace, they might be able to live with thinner margins, to a certain degree" said Noe. "But these companies are actually seeing their rate of growth decline significantly compared to the year-ago period."

In addition to slower revenue growth and cascading margins, liquidity is another area of softness to watch in the oil and gas industry. "Using the current and quick ratio as a measurements, oil and gas companies are less liquid than they were during the trough of the recession," Noe said. "We're not seeing monumental declines in the current and quick ratios, but these numbers indicate that short-term liabilities have been outgrowing short-term assets over the past seven years for these companies."

Noe said it's unclear what will happen to oil and gas prices. "Whether or not prices stay low is for someone else to say," he said. "What we do know is that if prices continue to stay at their current levels, or dip lower, oil and gas extraction companies in the U.S. will continue to struggle with profitability, liquidity, and revenue growth."

Through its cooperative data model, Sageworks collects and aggregates financial statements for private companies from accounting firms, banks and credit unions. Net profit margin has been adjusted to exclude taxes and include owner compensation in excess of their market-rate salaries. These adjustments are commonly made to private company financials in order to provide a more accurate picture of the companies' operational performance.